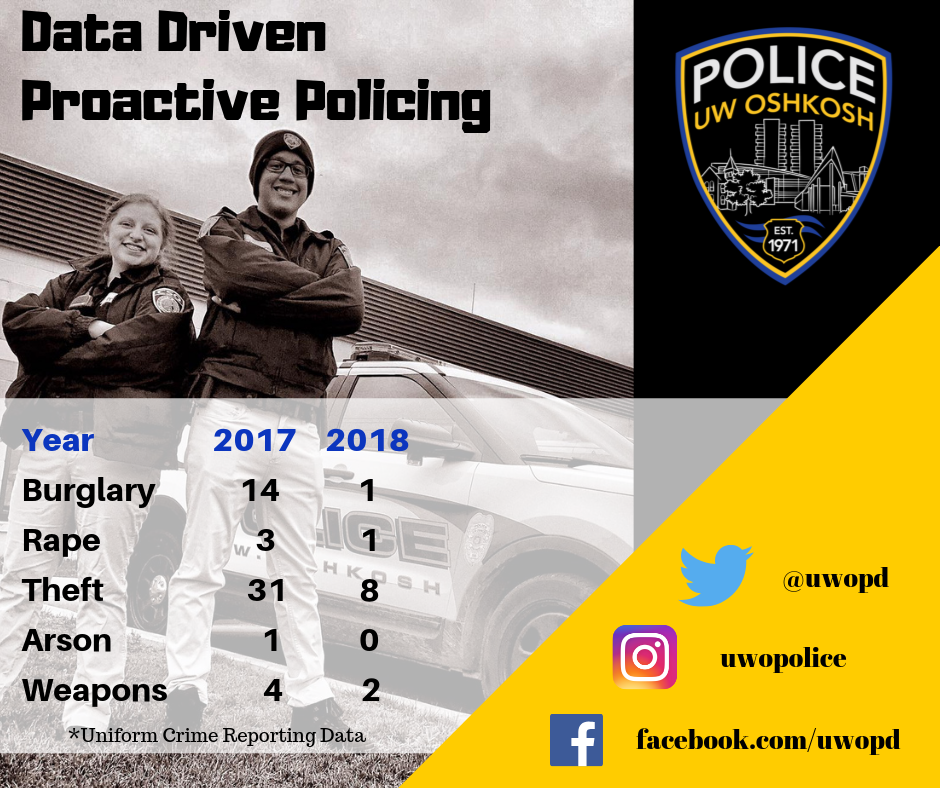 At the UW Oshkosh Police Department, we have been very intentional over the past few years about our policing style. Three years ago, we transitioned to a community policing model that stresses community input, data and intelligence-gathering coupled with problem-solving to reduce crime, fear of crime and disorder. This model identifies problems based on data but it can appear to be intrusive to community members depending on how they feel about the problem identified. A few examples of how we have deployed this police model on campus are:

The Busted Initiative was implemented at the start of the Spring 2018 semester. Our data showed that burglaries were on the rise several years in a row so we created the initiative to provide a data-driven directed patrol for our personnel and to educate our community members on how to protect their belongings.

The Red Zone Initiative was implemented for the Fall 2018 semester. We partnered with the UW Oshkosh Women’s Center and deployed our personnel with a focus on reducing underage drinking and sexual violence.

The Pedestrian Safety Initiative is something we rolled out for the Spring 2019 semester and it is currently ongoing. UW Oshkosh community members and community members who live near campus, walk through campus and drive around the campus have regularly identified pedestrian traffic as a major safety concern. We hear more feedback about pedestrian and traffic concerns than any other safety concern on campus so we are using data, community input and intelligence to deploy officers and community service officers to the right places, at the right times. The goal for all of our initiatives is to create a safer campus for our community members. The Pedestrian & Traffic Safety Initiative was developed to promote safe roadways and positively impact dangerous pedestrian and traffic behaviors. We have been transparent about our approach on this topic and our officers are spending approximately one hour each day specifically focused on pedestrian and traffic-related issues. Our intention with this initiative isn’t to issue citations, rather it is to educate our community on the laws that exist to protect them.

Thank you for your support over the past couple of years because community policing requires a partnership between the police and the community we serve and, it’s clear that together we’re making a positive difference!