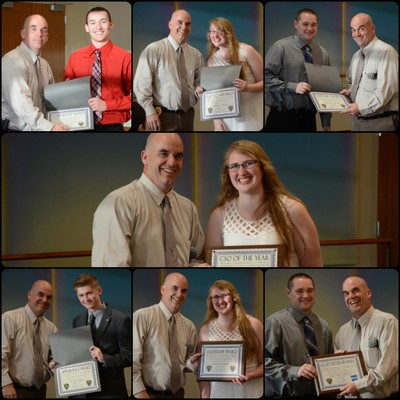 Award Criteria: The CSO exhibiting the best leadership qualities. Projected to be a future supervisor as well as someone who takes on a lot and is successful at completing what they take on. This CSO would participate in training of new CSOs and offer guidance taken from their own training and experiences during the course of the year. When conflicts arise between co-workers or questions need to be answered regarding policy, it is this CSO who would seek out answers from supervisors and shares that information with fellow CSOs.

Award Criteria: This CSO would be recognized as always portraying a positive image of the CSO Program, the University Police and the entire University as a whole. This CSO interacts well with fellow employees, other University staff, the public and suspects/victims/witnesses when working with officers.

Award Criteria: CSO who consistently shows up for work in a uniform that represented professionalism (shirts/pants pressed, shoes shined, brass polished and a general appearance that others would want to follow).

Award Criteria: A CSO who patrols with the most confidence, is able to complete tasks competently, is viewed as a trustworthy individual and is the person you look forward to working with the most. The partner award is not about toughness and/or size but more about competence, trustworthiness and reliability.

Award Criteria: This CSO is someone who routinely takes shifts from the conflict sheets, accepts call-ins, volunteers for special duties and makes time for security needs when requests are made for additional help.

Award Criteria: CSO who stands out as the most willing to lend a hand to RHDs, CAs and other Residence Life staff. The award will be voted on by Res-Life staff and who they recognize as someone that portrays the ideal of collaboration between police and Residence Life.

CSO of the Year

Award Criteria: This is a unique award that will encompass the top 3 vote-getters in all categories (except Duenkel award) and then these top there are voted on by Supervisors, Officers and PCOs. The idea is that this CSO will represent the consistency in multiple areas – as a CSO representative.