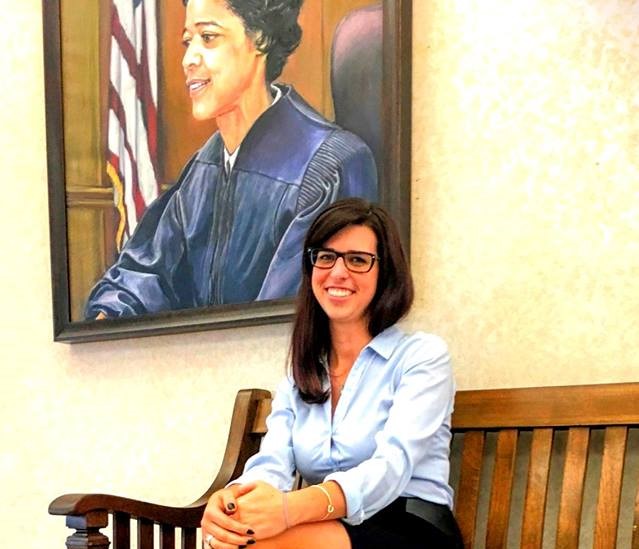 Kelsey Burazin graduated in 2011 with a major in Political Science and a minor in Spanish. She was accepted to Marquette University Law School, which was the school she hoped to attend. “While I was in law school at Marquette, I always knew I wanted to work in the public interest realm,” she writes. “I applied and received a Public Interest Fellowship grant my second year, which provided me with a grant in order to fund an internship I would have for the summer. I interned the summer after my second year of law school with Legal Aid Society in the Children’s Court division. After graduation in May 2015, there was an opening and I applied, but did not get the position initially. I worked in private practice for a couple months until I saw that there was another staff attorney position available in the fall of 2015. I applied and this time I got the job!” She has been with the Legal Aid Society in her current position for nearly a year.

Kelsey is an advocate for children who have been removed from their home by Child Protective Services, usually because of abuse or neglect. “I work as a guardian ad litem for children in the welfare system in Milwaukee County,” she says. “I am in court (whether it be simple hearings or full-blown jury trials) almost every single day advocating on behalf of hundreds of children with the ultimate goal of reunifying families if possible, or finding some other type of permanency for children via transfer of guardianship or termination of parental rights/adoption. I also represent children in private guardianship cases.”

Political Science is a common major for those who pursue law school. For Kelsey, it provided a connections and a foundation for creative problem-solving. “My degree in Political Science from UWO has helped me in my legal career in a couple of different ways. One basic — but very important — way is that it connected me to the right faculty and students in my preparation for getting into law school (studying for the LSAT, applying to schools, etc). Another way it helped me is to never stop thinking outside of the box. In my Political Science classes, I always remember having to think creatively in in coming up with theses and research. In the law, you can sometimes feel limited because you are restricted by statutes and case law, but I think it is important to keep an open mind and get creative with your arguments and how the law applies to each case, which is what I really love about practicing law.”

We were lucky enough to see Kelsey this past weekend at Homecoming and were delighted to hear about all of her accomplishments! Want to talk to Kelsey? You can reach her at burazk11@gmail.com or find her on LinkedIn.

PHOTO: Kelsey in front of a portrait of The Honorable Vel Phillips, for whom the building Kelsey works in is named.