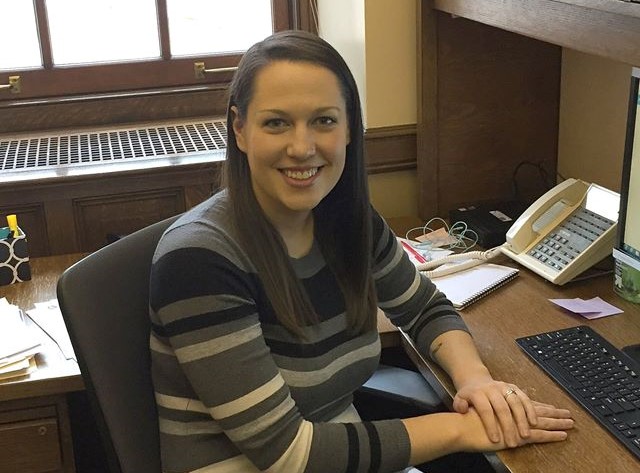 Erin (Clark) Mellon graduated with a major in Political Science in 2013. Like many of our graduates who want an active career in politics, Erin excelled in the classroom but also found opportunities to hone her skills outside of it. “I credit my internships in college as being a huge reason I was able to get into this field, especially the internship I had working in a legislative office,” she writes. That internship helped her to build a professional network so she could hit the ground running after graduation. “I was lucky to get my first job in the Wisconsin Legislature as a Legislative Assistant for a now-retired State Representative just a few months after graduating. I knew I wanted to work in a legislative office, and moved to Madison specifically to accomplish that goal. Networking is incredibly important in this job, so putting myself in a position to meet other legislative staffers was a huge asset.”

Erin’s first job after graduation was as a Legislative Assistant, where she was the first point of contact for anyone who called or emailed the office. She recently was offered a new position as a Research Assistant (RA), a position she really enjoys. “As an RA, my job revolves around policy, which I find to be much more exciting. When my boss is interested in introducing a bill, I do the research, sit down with groups and individuals who might be affected by the legislation, and work with a drafting attorney to make sure the language of the bill is right,” she says. “I’m responsible for helping my boss to take each bill from the first step where it’s just an idea, through committee, the floor vote, and to the Governor’s desk. My boss’s legislative priorities typically revolve around transportation and public safety, so most of the bills he introduces fall into those areas. As the RA, I’m also the clerk of the committee my boss chairs. For the 2017-2018 session he chairs the Criminal Justice Committee, which I’m really excited about!”

Erin also credits her major in Political Science with giving her the necessary skills to excel in her job. “None of the classes I took in college were specifically geared toward state government, yet the workload and environment in each of the classes I took has been incredibly relevant in my job now. This job involves a ton of research and a ton of writing, both of which, as you well know, make up a significant amount of the workload in the Political Science major. The open dialogue in all the classes I took also really prepared me for this role because you learn to articulately express a viewpoint, as well as consider issues from multiple points of view,” she writes. “Overall, I think my major has allowed me to approach this job with a much more open mind, which has certainly been an asset.”

How can you have a career like Erin’s? “Start early with internships and volunteer work,” she notes. “Visit the local party offices and get involved in State Assembly and State Senate campaigns. Find a legislative office to intern for, whether at the state or federal level. Meet as many people in the industry as you can.”

Erin also says something we think is particularly apt as our current students are spending long hours on final research papers: “I will also say the ability to write well is a huge asset in this job, and you’ll spend a ton of time doing so, whether it be letters to constituents, press releases, email newsletters, or memos to other legislative offices.” (See? There’s a method to our madness here in the department!)

We’re so proud of Erin and the work she’s doing in Madison! If you want to contact her, take a peek at her LinkedIn profile (see comments) or we’ll be happy to give you her Assembly email address. How lucky are we to have such amazing alums? And how lucky are YOU, current students, to have these same great alums as resources?

Note: The Political Science Department sends out offers for internships and work from politicians, political parties, and candidates for office as a service to our students. In this space, we will feature our alums from all across the political spectrum. We do so regardless of their political affiliation. No endorsement of the individuals or party is intended.