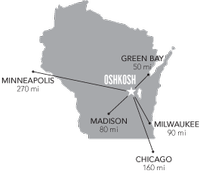 History of the Department of Public Administration

The Master of Public Administration (MPA) program at the University of Wisconsin (UW) Oshkosh has grown and progressed since its inception in 1972. The MPA program was established to meet the needs of employees in public, non-for-profit, and health care agencies interested in enhancing their administrative knowledge and skills. It was housed in the Department of Political Science from 1972 to 1983. In 1983 the MPA program became part of the Department of Public Affairs, which also contained undergraduate programs in Criminal Justice and Urban and Regional Studies. A significant addition to the MPA program was the Graduate Certificate in Health Care Management, which admitted its first students in Spring 2004. This interdisciplinary program was developed in recognition of the fact that the need for trained managers in the health care field was expanding rapidly.

In July 2011 the MPA program was removed from the Department of Public Affairs. A separate Department of Public Administration was established that continued offering both the MPA program and the Graduate Certificate in Healthcare Management. Beginning in spring 2017, the department started offering the MPA program 100 percent online in addition to its traditional classroom format. On June 9th, 2020, the Degree Assembly Board of Governors voted to accredit MPA with Fire and Emergency Administration and Management (FEAM) emphasis. This initial accreditation for the MPA with FEAM emphasis is for a period of 5 years.

Over the years the MPA program at the UW Oshkosh has been recognized for providing a top-notch education and training in managing public, nonprofit and health care organizations in Wisconsin and beyond. Nowadays the Department of Public Administration continues to expand its strong commitment to academic excellence and public service that began 49 years ago. The UW Oshkosh MPA program is unique with its comprehensive, career-oriented curriculum that includes four different professional emphases in general public administration, nonprofit management and leadership, health agency administration and fire and emergency administration and management.  All department programs are based on a strong culture of student-centered teaching and learning. Through its collaborations with the UW Oshkosh College of Business, College of Nursing, Division of Online and Continuing Education and other university departments, as well as external institutions, such as the City of Oshkosh, the Department of Public Administration also provides its students with various networks and opportunities for learning, practical internships and career destinations. 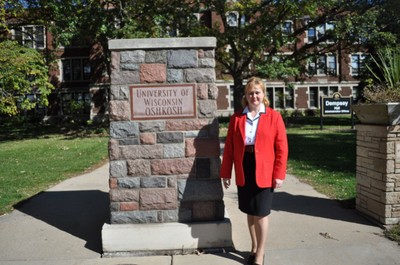 Anna Filipova was appointed to serve as Chairperson of the Department of Public Administration on June 1, 2015. She was reappointed for another three-year term, beginning on June 1, 2018 through June 2021. Filipova serves as Coordinator of the MPA program and the Graduate Healthcare Management Certificate.

Her major  accomplishments as Chairperson since her first term include:

Prior to serving as Chairperson of the Department, Filipova was instrumental in proposing and implementing revisions to the Graduate Healthcare Management Certificate curriculum and establishing collaborations with the College of Business and College of Nursing in its delivery (fall 2013); creating the department hybrid and online policy (2011), post-tenure review policy (2014), and transfer of credits policy (2013); introducing the thesis in the MPA curriculum and its guidelines (2012); and developing and continuously updating all narrative on the website and all marketing brochures (2012-Present).

Filipova has been on the UW Oshkosh faculty since 2009. She was granted early tenure in 2013, and two of the highest faculty honors – the 2016 Edward M. Penson Distinguished Teaching Award and the 2014 Edward M. Penson Faculty Award. She was also selected to the 2012-2013 Wisconsin Teaching Fellow and 2017-2018 Wisconsin Teaching Scholar by the University of Wisconsin System and UW Oshkosh. Filipova was granted professorship in September 1, 2018.

From September 2007-2009, Filipova was an Assistant Professor in the School of Public Affairs and Administration at Western Michigan University, teaching graduate and doctoral courses in public administration. She also served as Assistant Professor in the Department of Foreign Languages at the Air Force Academy in Bulgaria from 1994-2000. She taught English phraseology in radio communication to graduate cadet pilots and air traffic controllers.

She has authored research articles on health care organizational and community related issues, and has won faculty development research grants from the UW Oshkosh and the Blue Cross Blue Shield of Michigan Foundation. In 2010 she was awarded with Academy of Management Outstanding Reviewer Award.

Born in Pleven, Bulgaria, Filipova earned her master’s degree in English philology from St. Cyril and St. Methodius of Veliko Turnovo University in Bulgaria in 1994; her master’s degree in leadership in public administration from Saginaw Valley State University in 2002; and her Ph.D. in public administration in 2007, Pi Alpha Alpha in 2005, Phi Kappa Phi in 2008 from Western Michigan University. Filipova was a Fellow of the National Science Foundation Research Ethics Program.

Faculty and Staff Work As a Team

The department’s mission is carried out by dedicated and productive faculty and staff members. All faculty and staff work as a highly effective and cohesive team with emphasis on strong communication and collaboration, trust and commitment, leadership, and diversity of skills, talents and personalities. All faculty and staff are inspired by the common goal of providing quality educational experiences to all students and seeing UW Oshkosh graduates as effective leaders who serve responsibly their communities and contribute to the public good.