Reserving An Appearance by Clash

Clash, the official mascot of UW-Oshkosh Athletics, is available to entertain fans of all ages. Clash’s appearances are on first-come, first-served basis and completion of a request form does not guarantee a visit.

Clash loves to socialize, although he does not speak, and is always ready to have their picture taken with fans. They often attend a variety of events on the UW Oshkosh campus and in the Oshkosh Community.

Reserve Clash for your event 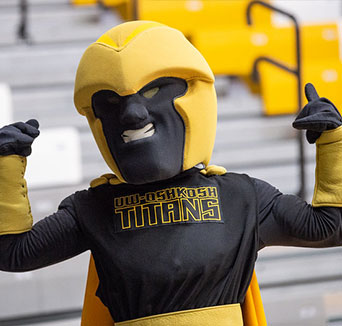 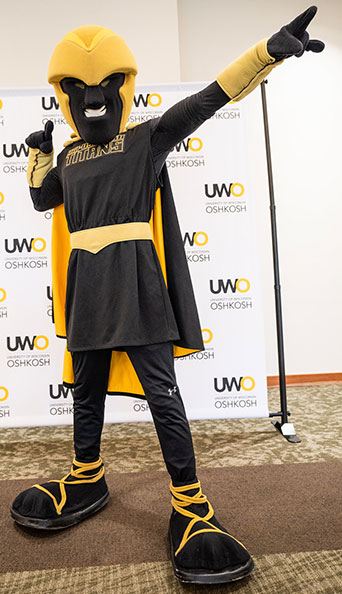 How The Name of Clash Was Selected

The UW Oshkosh administration turned to its students, faculty and staff and the citizens of Oshkosh for recommendations on the new name for the mascot of the school’s athletic teams.

Through an online survey, the campus community submitted suggestions, which then were whittled down to the top four. Then, in order to engage the Oshkosh community, polls of the final four choices were conducted. Polls were placed on both the University and The Oshkosh Northwestern websites so that anyone could vote for a mascot name that would enhance UW-Oshkosh’s sub-branding efforts and regional partnerships.

After the voting period ended, Clash proved to be the most popular choice. Clash was born and given the name by Chancellor Richard Wells at UW-Oshkosh’s homecoming football game against UW-Stevens Point on Oct. 17, 2009.

“Clash complements the experience at UW Oshkosh sporting events through characterization and energetic performances”, said UW Oshkosh sports information director Kennan Timm. Mascots like Clash draw attention to the brand they represent. In this case, the brand is UW-Oshkosh and the 21 teams affiliated with the school’s athletic department. Our goal is to have Clash create attention, boost team and community spirit and build a lasting connection between UW Oshkosh and children, our future Titans.

With the name in place, Clash has now cemented itself as the face of UW-Oshkosh Athletics.

Requesting An Appearance by Clash

Clash is very busy, and requests must be made at least two weeks prior to the event. Keep in mind that Clash might not be available during academic breaks, exam weeks, or on days that there is a game (especially football and basketball).

Clash can be reserved by submitting the request form at the bottom of this page. A representative from the Reeve Union will contact you regarding your request and Clash’s availability for your event.

Approval of Clash’s request will be based on the event’s compliance with the appearance guidelines (listed below) and mascot availability.

Reserve Clash for your event

Clash may participate in the following activities:

The following convenience must be provided

Clash will not appear at any events that may be construed as advancing a political agenda or the commercial interest of a business entity that is a competitor of UW Oshkosh’s sponsors and partners. All publicity for the event (photos, videos, etc.), whether in advance, during or afterwards which mentions an appearance by Clash or uses university marks (logos) must be approved by Reeve Union before use. For approval, please contact Reeve Office Manager at (920) 424-2346.

Please fill out this form and we will let you know if Clash is available.