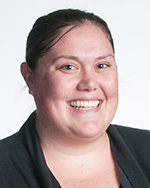 Beth Hubbard received her MFA in Film Production from Chapman University in 2012.  She has been an editor, sound designer, mixer, and/or  foley artist on films that have won dozens of national and international awards, including a nomination for Best International Sound Design at the Hollywood North Film Awards and her short film Alex & The Firefly is now streaming on Amazon Video. Her passion for quality sound design and Foley work has led to the addition of a Foley stage and 7.1 surround sound mixing studio in the Radio TV Film department.