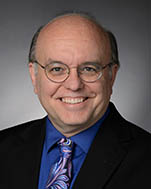 Randall Davidson was the Director of Radio Services at the University of Wisconsin Oshkosh from August 2008 until his retirement in September 2020. Before joining UWO he spent 18 years with Wisconsin Public Radio in Madison, where he was a news producer and the network’s afternoon newscaster. He also was the network’s chief announcer, training new announcers and filling in on music programs where needed, most often on Simply Folk, the network’s weekly folk music program. In addition to his on air work, Davidson also served as the unofficial historian of WPR, answering listener questions about the early years and keeping track of historical artifacts and collections relating to the network’s history. His book on the topic, “9XM Talking: WHA Radio and the Wisconsin Idea” was published by the University of Wisconsin Press in 2006. It was honored by the Wisconsin State Historical Society as the best book on Wisconsin history published that year.

Davidson began his radio career at UW Oshkosh’s station WRST-FM. While in college, he worked as a disk jockey at Appleton commercial station WHBY-AM and while in graduate school in Madison, he reported for United Press International. He is a native of Neenah, Wisconsin.