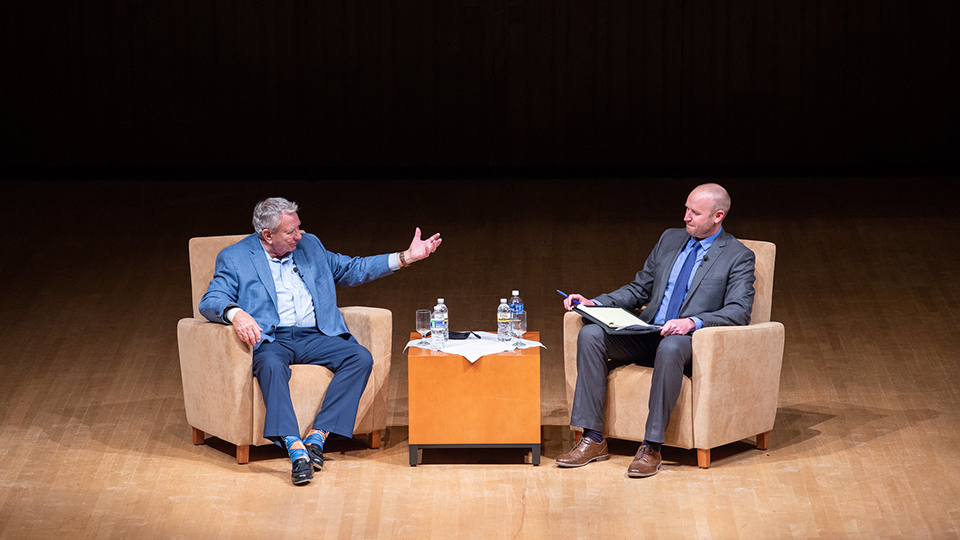 University of Wisconsin System Interim President Tommy Thompson shared stories and insights into his decades of public service during an on-stage conversation with the UW Oshkosh community Wednesday evening.

The wide-ranging conversation hosted by Michael Ford, director of UWO’s new Whitburn Center for Governance and Policy Research, took place in the Music Hall of the Arts and Communication Center on the Oshkosh campus. The event took place on the eve of the UW System Board of Regents October meeting that runs Thursday and Friday. 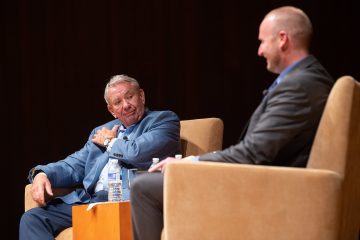 President Thompson has earned distinction as Wisconsin’s longest-serving governor, a former U.S. Health and Human Services Secretary under President George W. Bush and, currently, leader of  the university system. He was first elected to the Wisconsin State Assembly at the age of 23.

As a “people person,” Thompson said he has always been fascinated by the “give and take” of politics. He believes good public sector leaders require four characteristics: knowing what you want to accomplish, believing in yourself, exuding confidence and the ability to make a decision.

Some of the decisions that he is most proud of from his time as Wisconsin’s governor relate to the environment, welfare reform and school choice.

“I don’t believe in the status quo,” he said. “If you are not living on the edge, you are just taking up space.”

In his latest interim role, Thompson is committed to “bragging” about the accomplishments of the state’s public university, following a decade of rough years for the UW System.

“There should be no more sitting back and letting people criticize us,” he said. “We need to stand up for the Wisconsin Idea and the vitality and vigor of the UW System.”