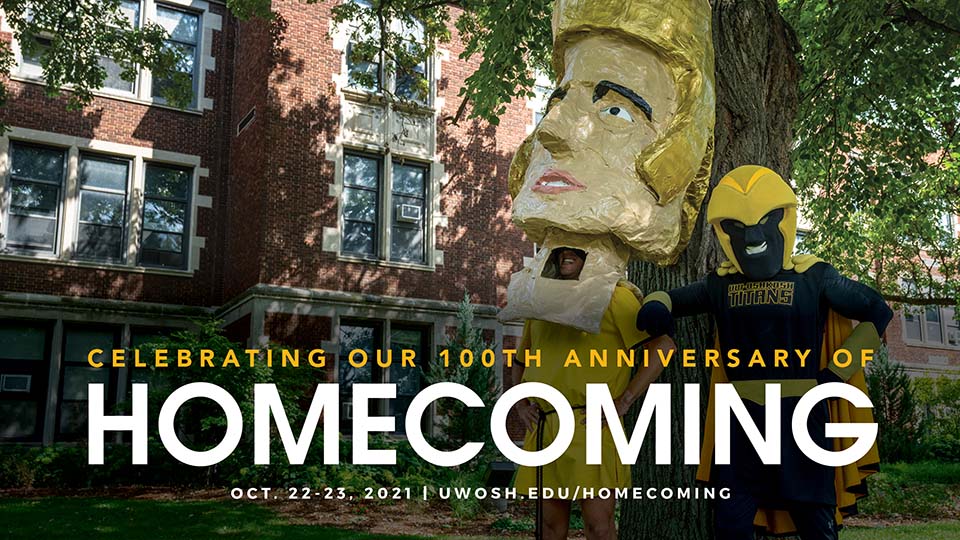 A University of Wisconsin Oshkosh alumnus said it was exciting to be on a large college campus and to spend a couple of years playing the part of the original Tommy Titan mascot.

Gary Ferron ’74, of Cottage Grove, grew up in the small town of Algoma before venturing to UW Oshkosh, where he would complete degrees in urban and regional studies and sociology—the first in his family to go to college. 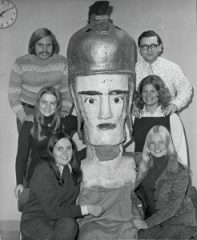 An early Tommy Titan mascot at UW Oshkosh was a hit with students.

“Coming from Algoma, a lot of kids went to Oshkosh,” Ferron said, adding that the campus was “just far enough” from home.

Ferron loved his time at UWO. The campus was filled with potential new friends and he made many in the dorms and in the Delta Sigma Phi fraternity. He remains connected to a group of college friends to this date.

“UWO was the best four years of my life,” Ferron said.

He lived in Fletcher Hall and then Donner Hall, before moving to a fraternity house.

In the early 1970s, the idea of Ferron donning the Tommy Titan mascot seems to have arisen from a toga party the night before a football game.

“Many of us (at the toga party) were going to the football game,” he recalled.

Ferron wanted to see if he could go into the game and obtained what he called the “toga head.”

“I went to the stadium and put it on,” he said. “The very first game—I guess I was a sensation.”

Ferron went into the crowd and eventually onto the football field by the cheerleaders. He was careful not to get in the way of football players.

“They (cheerleaders) couldn’t believe it,” he said. Ferron had gym shorts under a toga but all that people could see were legs. 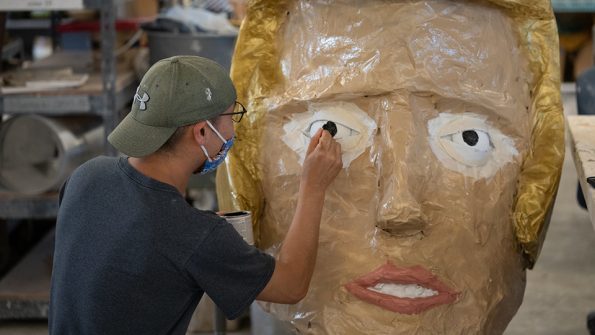 Arimasa Imaizumi ’21, works on a recreation of the Tommy Titan mascot from UW Oshkosh’s past.

Ferron served as Tommy Titan during the football games during his sophomore and junior years. Someone else took on the role after that.

The mascot costume debuted at the Oct. 21, 1967 Homecoming football game against St. Norbert College. Created by art students and alumni, the outfit with a four-foot Titan head, sported a Greek mythology-inspired look with a golden helmet and sword. It was intended to be worn by a student at sporting events.

The costume is not seen in photos after the early 1970s.

It is anybody’s guess what happened to the original Tommy Titan head. It’s possible its condition deteriorated from activity at sporting events. Another theory is that a cheerleader took it, others believe it was burned in a bonfire. Rath said a former athletic director told him Tommy was “deep in the bowels of Kolf Sports Center and would never resurface.”

The mascot was not replaced until Clash the Titan debuted in 2009.

A large Tommy Titan head was re-created this year and is expected to be on display Homecoming weekend in Reeve Union.

Ferron, now 70, is retired after a career of various roles with the state of Wisconsin. He had hoped to attend Homecoming festivities to see the recreated Tommy Titan, but said it will not happen this year.

Ferron’s fraternity brothers, John Close ’76, and Jim Rath ’75, intend to be part of an upcoming epic fraternity reunion—expected to be the largest reunion in the history of Delta Sigma Phi/Epsilon Beta―the UWO chapter of the social fraternity.

“As a group, we have been burning up the phone wires reaching out to brothers that we have not seen for days, weeks, months, years―up to and including 50 years,” Rath said. 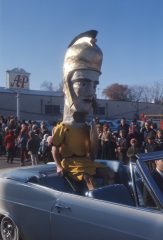 Tommy Titan was a presence at sporting events and other campus activities in the 1960s and ’70s.

In honor of the fraternity reunion, national executive director Phil Rodriguez is expected to attend several Delta Sigma Phi/Epsilon Beta events during the 100th Homecoming weekend, including the alumni banquet.

He also will attend the Delta Sigma Phi/Epsilon Beta Committee Board/Active Chapter meeting the morning of Oct. 23 at Clow Science Center and then head to Terry’s Bar and Grill in Oshkosh, where the fraternity will host a private party in the afternoon. Many alumni also are expected to attend the football game at Titan Stadium.

Rath credited Rodriguez with leading the fraternity through the pandemic and said he is proud to join him as a member of Delta Sigma Phi’s elite 1899 Society.

“Yes, we are looking to see a lot of old familiar faces and remember those who have passed away as well as those who will be unable to join us for health or other reasons,” Rath said about the UWO reunion, adding that additional gatherings of fraternity alumni are being considered beyond Homecoming weekend.

Close, a radio TV film major, plans to spend part of Oct. 22 in his college department, as well as speaking to a Learning in Retirement class and attending the alumni banquet.

The possibility of a reunion to re-connect with old friends was discussed by Close and Rath after they attended the funeral for a Delta Sigma Phi brother. They say about 750 men have been part of Delta Sigma Phi at UWO since 1965―many they are hoping will return to Oshkosh.

Close will be traveling to Oshkosh from his home in Charlotte, North Carolina; Rath will come from Fort Myers, Florida.

The two encourage students, alumni and families to take in Homecoming, with all the festivities and social interaction.

“During our time in the early 1970s, the football games were a total social experience for all of campus,” Close said. “There was a procession from campus to the stadium (and) the place was packed.”