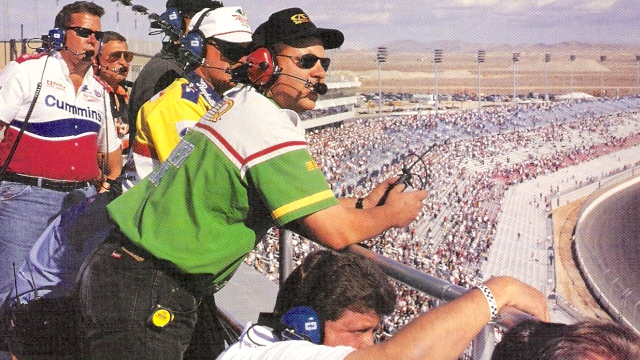 University of Wisconsin Oshkosh alumnus and NASCAR expert John Close ’76, reunited with classmates Homecoming weekend and led a talk on the way his college degree propelled his career.

Close, who traveled to Oshkosh from his home in Charlotte, North Carolina, led a Learning in Retirement session that was attended by about 50 former and current students, faculty and staff. Close graduated with a degree in radio TV film and the writing skills he learned were the backbone of his working life.

“Everything I landed (in his career) always came back to my UWO training,” he said. “I knew how to write. That always got us through.” 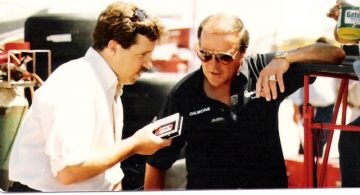 For more than 40 years, he worked in a variety of roles and for a number of employers. He retired in 2019 after publishing the biography, Barnyard to Brickyard, the Rich Bickle Story.

With a UWO degree, Close worked a couple of jobs before he connected with a college classmate at the Capital Times newspaper in Madison.  He was considered for sports writing, but when they learned his real passion was motorsports he became their racing expert and covered 70-75 races a summer. Close, who grew up around racing with his father, wrote about the skilled crop of drivers who traveled the short tracks in Wisconsin and the region. 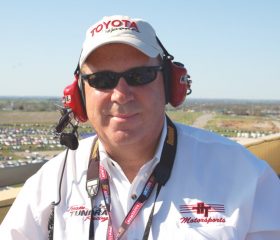 John Close worked as a “spotter,” in 2007, talking to a NASCAR driver at Kansas Speedway.

Life in the fast lane

Close, friends with Wisconsin’s star drivers, moved south to NASCAR’s hub in North Carolina. In the 1990s, he was working with icons in the sport including Bill Elliott, Rusty Wallace and Dale Earnhardt Sr.

He related stories about the volatile racing industry and the way teams and drivers changed due to the ebb and flow of sponsorship dollars―as well as personality differences or performance issues.

An inherently dangerous sport, Close told the group at UWO how a driver for a team he represented, Neil Bonnett, died in a crash during a practice session Feb. 11, 1994, at Daytona International Speedway. It was Close’s first day on the job.

The experience provided intense on-the-job training in crisis management and Close said he instantly went from a “nobody” to someone everybody knew.

Close spoke about his work handling public relations for race tracks as well as countless other stars of the sport.

After working in radio, newspapers, public relations, books and marketing, Close had an unexpected and abrupt career shift when driver Rich Bickle and his spotter had a major argument. The spotter walked out and Bickle told Close he would be his spotter—responsible for talking to drivers on a two-way radio as they maneuver through traffic during a race. The spotter keeps a driver calm, alerts him to crashes ahead or issues with his own car including tires going flat. He tells the driver when to enter the pits for service and how many laps are remaining in a race, tells him who is fast and which driver is the leader, among many other communications.

“It was a tremendous amount of responsibility,” Close said of his role over 13 years, “but I never felt nervous.”

Close had the opportunity to write books related to NASCAR and its drivers, “always going back to that writing,” he said. 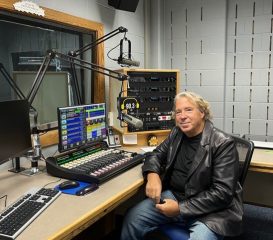 Looking back, he said, “none of this would have been possible if I hadn’t gone to school here,” he said.

“It’s hard to believe it was 50 years ago, in the fall of ’71, I was a freshman,” he said, a picture of his UWO student ID showing up on the large projection screen at the front of a lecture room at Sage Hall.

No one in his Close’s family had graduated from college. His father, who died before realizing the success his son would find in the motorsports industry, told Close to believe in himself and never be afraid to take a chance.

“It kind of cool I get to come here today,” Close said, his voice breaking with emotion. “It was 45 years ago today that (his father) passed away.”

One person in the audience asked how Close’s wife handled his life on the road, at races, and the numerous positions he’s held over the years.

Close said his wife, Gail, was supportive, had her own professional career and held down duties on the home front. 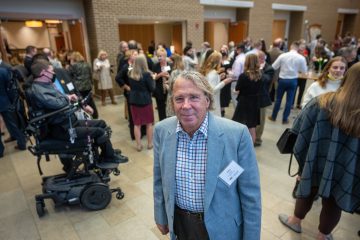 John Close attended the Distinguished Alumni Awards Dinner where a couple of his fraternity brothers were honored.

Several former fraternity brothers embraced Close after the talk. A large reunion of the Sigma Delta Phi fraternity at UWO coincided with Homecoming.

Beth Hubbard, assistant professor in the UWO radio TV film department admitted she has a recently found interest in the work of NASCAR “spotters.”

“He (Close) just loves this place so much,” she said. “I hope he can come back on a regular basis.”

Top photo: John Close working as a spotter in 1996.