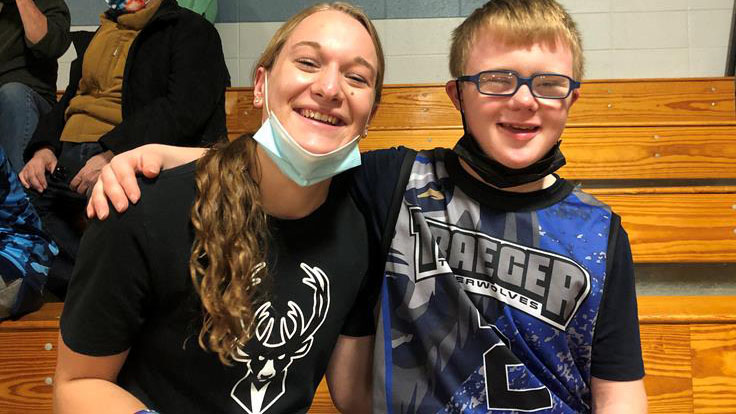 A love of all things sporty inspired new University of Wisconsin Oshkosh physical education graduate Jordan Miller, of Marinette, to help an eighth grader with Down syndrome find success on the basketball court.

Miller jumped at the chance to provide support to 14-year-old Levi Kiefer, a member of the Carl Traeger Middle School basketball team in Oshkosh.

The opportunity served as a required field experience for her Physical Education and Sports for Individuals with Developmental Disabilities class taught by Chris Stratton, a human kinetics and health education lecturer at UW Oshkosh.

“I am extremely passionate about the sport of basketball, and I knew that it would be an incredible experience to share my love of the game with a student and to make it more equitable for him,” Miller said. 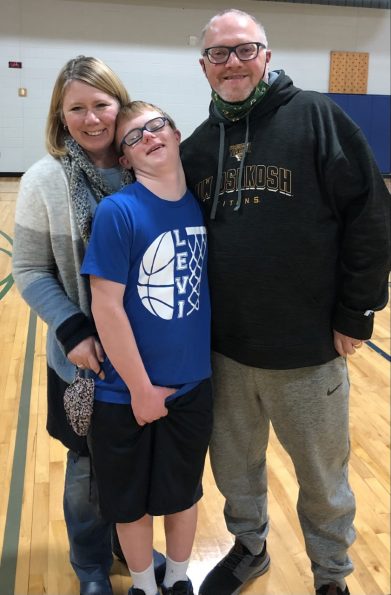 Levi at the final game of the season with his parents Julie and John Kiefer.

Levi’s mom, Julie Kiefer, a UWO outreach program manager with Online and Continuing Education, is grateful for Miller’s commitment to assisting her son at every practice and game from mid-October until the first week in December.

“It was very important to us that Levi participate just like every other student. We didn’t want practice taking place on one side of the gym and Levi practicing with Jordan separately. That isn’t inclusion. Jordan took an active role in coaching the whole team, so that Levi was not singled out,” she said.

When practice drills got hard, Miller found alternatives for Levi.

“The goal was to get him to participate fully at practice, which he worked up to. Jordan was very intuitive in knowing when to assist Levi and when to step back and let his peers encourage him, which is a huge motivator for him,” Kiefer explained.

At games, Miller advocated for Levi with the referees and opposing coaches.

“She asked the refs not to call him for double dribble or traveling, which he tends to do. He participated fully in games. Everyone got equal playing time, including Levi. He scored four times in games and the entire gym erupted in cheers for him, including the opposing teams’ players and fans,” Kiefer said.

Miller took note of Levi’s growth over the season.

“He went from sitting out for over three quarters of the practice and skipping drills to participating in 100% of the practice activities. He scored baskets in multiple games this season, and the entire crowd cheered each time. I don’t know who was more excited … me, Levi, his teammates or the crowd? The atmosphere was incredible,” she said. 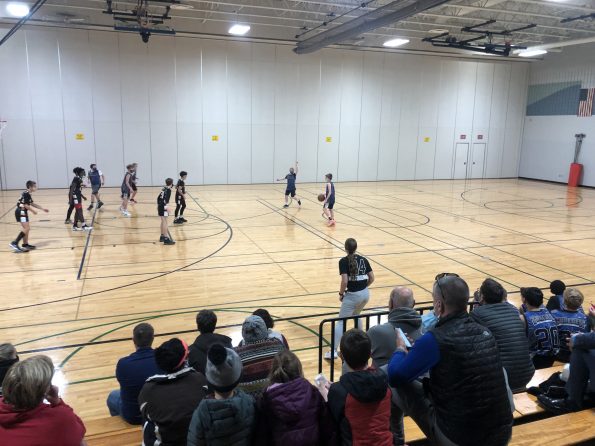 The student becomes the teacher

Miller said Levi taught her that progress is not always linear. Their relationship started off slowly. They moved forward and then hit some bumps in the road.

“I learned that the ups and downs of the journey didn’t really matter. It was the outcome and the fact that Levi had fun that mattered,” she said.

When one game in particular did not go their way, Miller said she felt frustrated. “I don’t think Levi knew if he won or lost, but he knew that he had a good time playing. I let go of my disappointment and took a moment to appreciate Levi’s outlook on life,” she said.

Fast break to a teaching career

As Miller was finishing up her field experience and the rest of her coursework this fall, she learned of a physical education position in her hometown. She applied and was offered the job even though she was not expecting to graduate until May 2022.

Instead, Miller wrapped up her UWO physical education degree from UWO in December, with additional licensure in adapted physical education, health education and coaching. She applied for an emergency teaching license, so she quickly could start at Garfield and Park elementary schools in Marinette.

She will swap out a semester of student teaching for an on-the-job placement and apply for a regular license at the end of the school year.

The journey has truly come full circle for Miller.

“When I was in middle school and high school in Marinette, I loved sports, being active and everything to do with the capabilities of the human body. In addition to my interests, I had many amazing teachers who inspired me to become a physical educator,” she said.

Miller’s college career began at UW-Green Bay, Marinette Campus, where she played basketball and volleyball and earned an associate degree. She then picked UWO to continue her education.

“I had heard many great things about the physical education program here, and my experiences have lived up to those recommendations,” she said. “My professors went above and beyond to make sure I got the most out of the program to become a quality physical educator.”