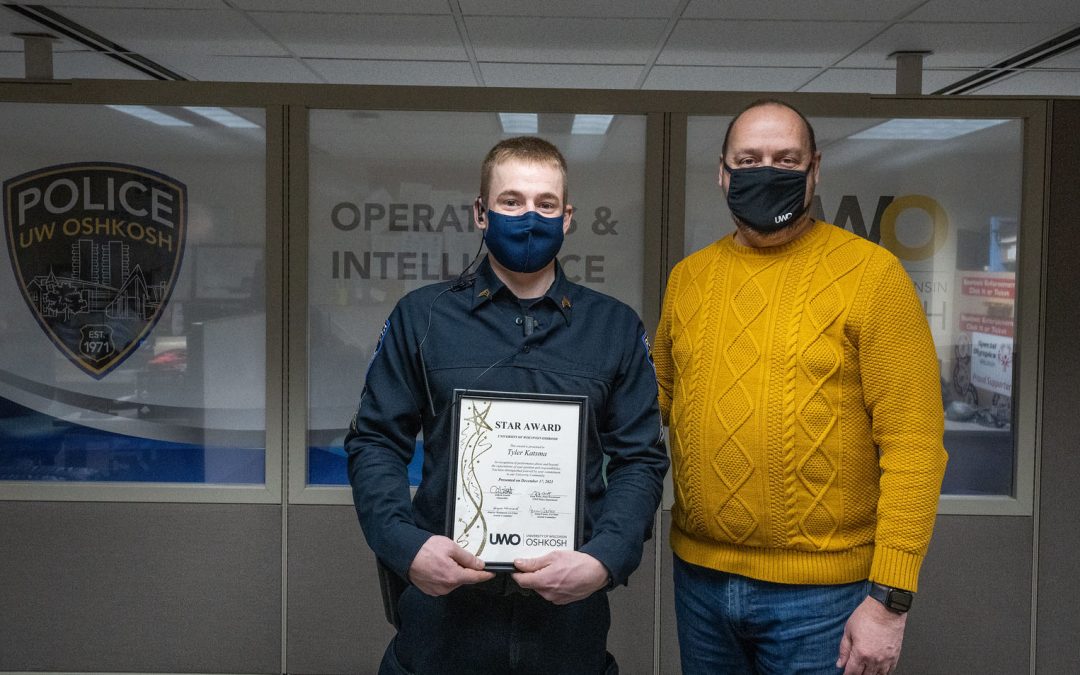 Tyler Katsma, a sergeant with the University of Wisconsin Oshkosh Police Department, has been named the recipient of the January 2022 STAR Award.

He was nominated by Lisa Mick, supervisor of grounds and automotive with Facilities Management at UW Oshkosh.

“Tyler reached out to me spring 2020 and asked if he and a CSO, Austin Wunnickee, could have garden space behind the auto shop in the community garden. We had no available raised beds, and I offered him a ground space that was weed-filled and overgrown. The two worked hard to make it what they needed and then offered to help in other areas of the community garden. In the time they had been helping this past year, they built 13 new raised beds and filled them with soil and horse manure. The work they put in was a multiple-day commitment and has allowed for more garden members.

“This fall Tyler reached out and asked if they could clean up the space so that in the spring it would be easier for me to treat for weeds. This allows us to have an easier growing season in 2021. Tyler and the CSO spent several hours cutting down and hauling all the plant material out of the garden area and then did repairs to the fence where the rabbits were sneaking through. His help and the recruiting of the CSO was invaluable this year for the community garden.

“And then the snow season came. I truly believed I could not think more highly of Tyler and then snowfall on Dec. 29 hit. Due to budget cuts the snow removal crew is unable to clear campus without the assistance of other departments. The structural and HVAC crews have always helped, but due to the holidays most of the staff were on vacation. While texting to see if I could say “hi” during my 2 a.m. start, I found out he had off. He, I believed, jokingly offered to help with plowing. After a couple more texts it was determined that he sincerely wanted to help and filled the remaining opening in my snow crew. Tyler joined us at 2 a.m. on Dec. 30  and worked for four hours clearing 4.5 parking lots. He felt it wasn’t a big deal, but it was the difference between my two mechanics working 13-hour days versus 15-hour days. Tyler has been a blessing to me in this past year of frustrations. He has gone outside his typical job duties and made my life easier.”