The University of Wisconsin Oshkosh has announced Kimberly Rivers will serve as the interim director of the University Studies Program effective Jan. 31. 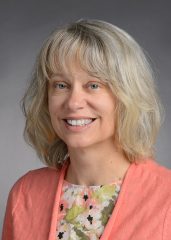 Rivers was appointed interim dean of the College of Letters and Science (COLS) in August 2020. She earned a doctorate in medieval studies from the University of Toronto. She joined the history department at UW Oshkosh in 1995 and was promoted to professor in 2010. Rivers previously served as an associate dean in COLS and two terms as history department chair.

Her research interests include late-medieval intellectual history and memory and mnemonics in late-medieval preaching and religious devotion. In 2016 Rivers was named a John McNaughton Rosebush Professor for excellence in teaching, professional achievement and public service. She received a UWO Distinguished Teaching Award in 2006.

The University Studies Program is the general studies program at UWO. It is intentionally designed to support high-impact practices and inclusive excellence. Some of its unique features are small, first-year-experience classes, a community engagement experience for second-year students, and the three signature questions—around matters of civic learning, intercultural knowledge and sustainability—that are woven throughout the program’s courses.