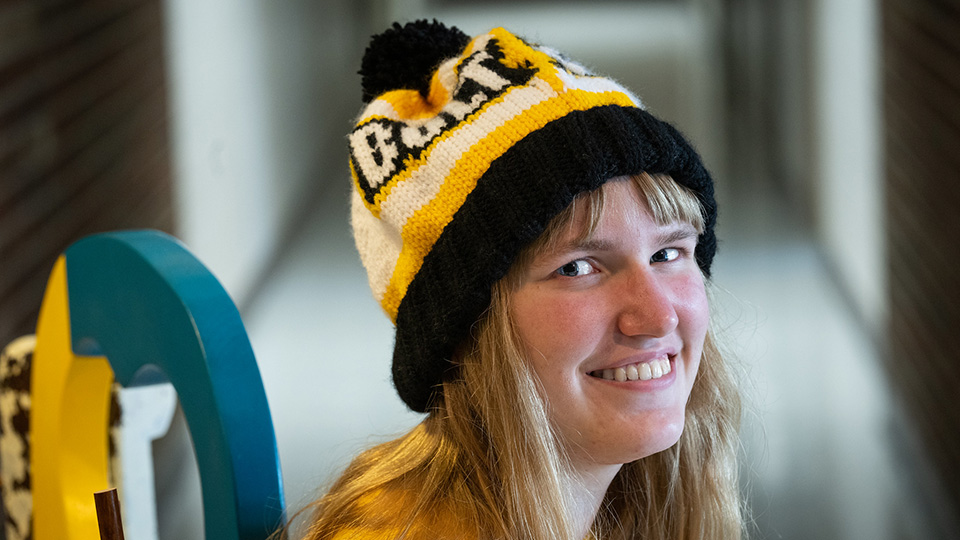 University of Wisconsin Oshkosh second year fine arts major Sarah Vandersee has a colorful one-of-a-kind hat to promote the newly organized pep ensemble, the Bolt Band, which she is a member of. Not only can she play a cool saxophone, she whipped up her own band swag in a stretch of about four days―one spent designing and three for knitting.

Vandersee said she learned to knit when the COVID-19 pandemic took hold. She first learned crocheting as a way to keep busy. It soon propelled her interest in learning to knit.

When she had the basics of knitting down, Vandersee started making some of her own creations, including the Bolt Band hat.

“Sarah arrived at our first performance wearing that hat,” said Joe Scheivert, director of athletic bands at UW Oshkosh. “She created that on her own over the winter break; it’s really impressive!”

Vandersee said she learned to do the most common stitches by watching YouTube videos, then read from patterns to learn how to apply them.

She said the hat was challenging to design.

“When doing color work, the design has to be broken down into a grid to lay out the individual stitches,” she said. “The difficulty in that was remaking the logo without it looking too pixilated so you can still recognize the lightning bolt and the letters―while making sure it all fits on the hat.”

Her first go at it, the design was so big the hat covered her eyes.

Vandersee’s fine arts major has a 3D studio emphasis. She has a passion for fiber arts; and she took a class in woodworking over interim. Her career goals are not yet set, but she’d at least like a side business that involves weaving, knitting, crocheting and spinning yarn. 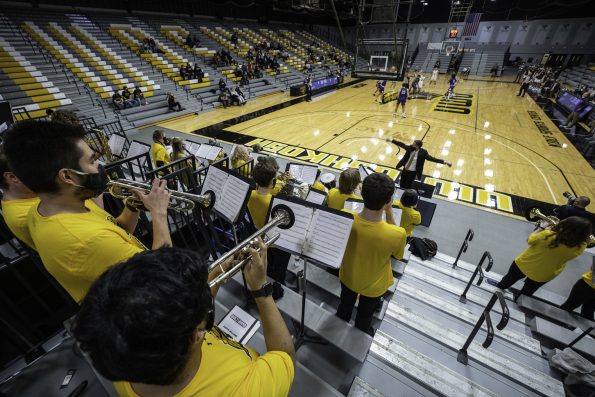 The Bolt Band performs at a Titans basketball game earlier this month.

“I was actually a bit nervous about joining the band since I hadn’t played much for the past two years and I thought all the music majors that would join would leave me in the dust,” Vandersee said. “However, Dr. Scheivert was really encouraging and I convinced myself it was worth a try. I am definitely not the best alto sax player out there and I’ll admit I have a long way to go in learning the music. But one thing I did notice is that no one was upset by that and just encouraged me to try my best and have fun.”

Vandersee has played alto sax for seven years, including in the Omro High School marching band, concert band and pep band. She hopes to join the Titan Thunder Marching Band if she has a lighter semester load of classes. She intends to continue with the Bolt Band for as long as possible.

Scheivert said pep band members are having a great time, though they’ve had limited basketball game performances so far. He hopes cancelations due to COVID-19 are behind them.

“They sound like they’ve been doing this for years,” Scheivert said. “My favorite part of the experience has actually been to watch and listen to the students as fans of the game. Even in the brief time so far, they’ve grown to be very energetic and vocal, developing some of their own cheers and traditions. It’s exactly the type of experience we were hoping to provide for them when starting this ensemble.”

Among their songs are Hey Baby; the new fight song, Go Mighty Titans; its victory song, the Beer Barrel Polka; and other popular classics.

Vandersee said while she is working to improve with the band as they expand their song lineup, she figured she could add to band spirit by doing something she was already good at.

And her gold, white and black knitted creation is doing just that.