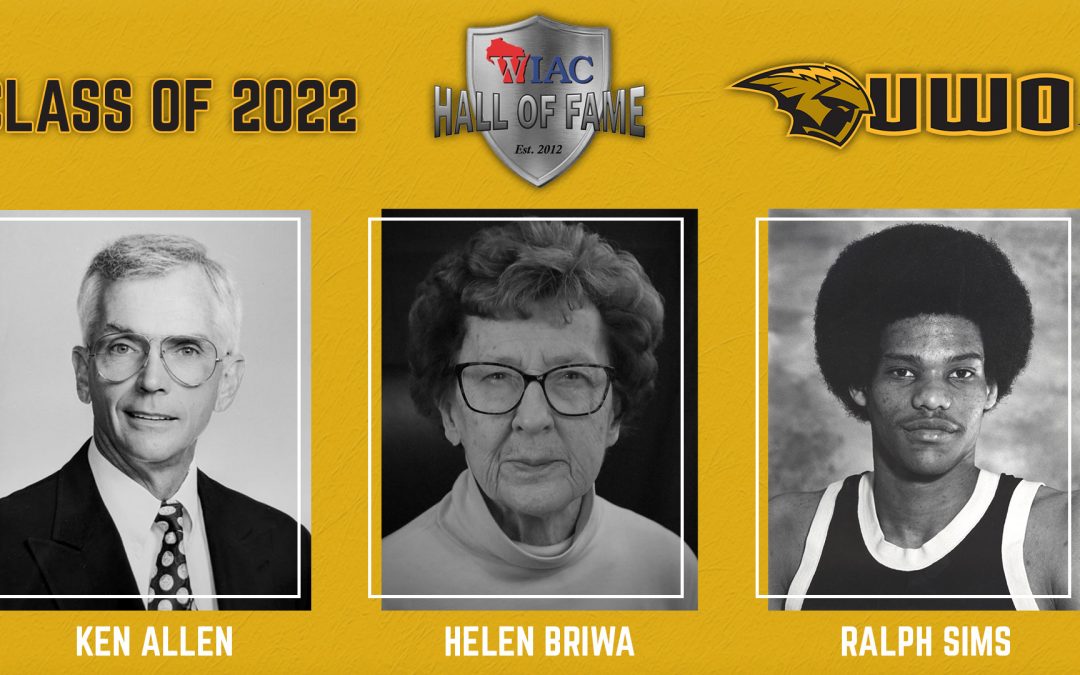 Ken Allen, Helen Briwa and Ralph Sims—three legendary personalities in the history of University of Wisconsin Oshkosh athletics—will be inducted into the Wisconsin Intercollegiate Athletic Conference (WIAC) Hall of Fame July 23 at SentryWorld in Stevens Point.

The 27-member 2022 class will join a prestigious conference Hall of Fame that includes 87 members.

In announcing the new class, WIAC Commissioner Danielle Harris noted how difficult the selection process is given the 109-year history and incomparable success of the conference.

“The selection process is always challenging given the success of this conference over its history,” Harris said. “It remains our intention to continue to induct future Hall of Fame classes every three years with the goal of recognizing those student-athletes, coaches, administrators, officials and others whose contributions and achievements have solidified the WIAC’s status as the most accomplished Division III conference in NCAA history.”

Allen served as UW Oshkosh’s head men’s gymnastics coach from 1969-82 and 1984-92, leading the Titans to seven NAIA championships and three NCAA Division II titles. UWO also won a pair of conference titles and Allen received NCAA Division II Coach of the Year honors three times and NAIA Coach of the Year recognition on five occasions. He coached athletes to 47 NAIA event titles and 23 NCAA Division II event first place finishes. Allen was an assistant coach for the USA men’s gymnastics team at the World University Games in 1977, the head coach for the East Team at the National Sports Festival in 1978 and the head coach for the USA men’s gymnastics team in 1979. In 1983, Allen was an assistant coach for the Switzerland National Team. In 2012, he was selected the WIAC Men’s Gymnastics All-Time Coach in conjunction with the conference’s Centennial Celebration. The Jersey City, New Jersey native was inducted into the National Gymnastics Judges’ Hall of Fame in 1996, UWO Hall of Fame in 1999 and USA Gymnastics Hall of Fame in 2008.

Briwa is the only women’s athletics director in UWO history, holding the role from 1971-88. In 1970, she was a member of a three-person committee that drafted the Wisconsin Women’s Intercollegiate Athletic Conference (WWIAC) constitution. Briwa was the WWIAC president in 1982 and past president in 1983 and was a member of the search and screen committee that selected the first WWIAC commissioner. She helped form the Midwest Association for Intercollegiate Athletics for Women and served as organization’s commissioner from 1971-73. Briwa served as UWO’s head coach in numerous sports, including women’s badminton (1974, 1978-79), women’s field hockey (1968-92), softball (1971-72, 1976), women’s track and field (1969, 1974-77) and women’s volleyball (1968-73). In field hockey, Briwa secured WWIAC Coach of the Year honors in 1981. The Hudson, New York native received a special recognition award from the WWIAC in 1989 and was inducted into the UWO Hall of Fame in 2006.

Sims was a member of the UWO men’s basketball team from 1975-78 and collected NAIA All-America First Team honors in 1978 after earning Third Team recognition in 1977. The three-time all-conference first team selection was named the conference’s Player of the Year in 1977 and 1978. Sims finished his career with 2,303 points—the third-highest total in league history. He ranks first in the conference with 963 career field goals made, third with 1,784 career field goals attempted and fifth with a 22.3 career scoring average. In 1978, Sims was named to the NCAA Pizza Hut All-Star Game Ballot and received Academic All-America Second Team distinction from the College Sports Information Directors of America. In 2012, he was selected to the WIAC Men’s Basketball All-Time Team in conjunction with the conference’s centennial celebration. The Waukegan, Illinois native was inducted into the UWO Hall of Fame in 1990 and the NAIA District 14 Hall of Fame in 1994. Sims died in 1995.

Information on purchasing tickets for the 2022 WIAC Hall of Fame Banquet will be provided later.