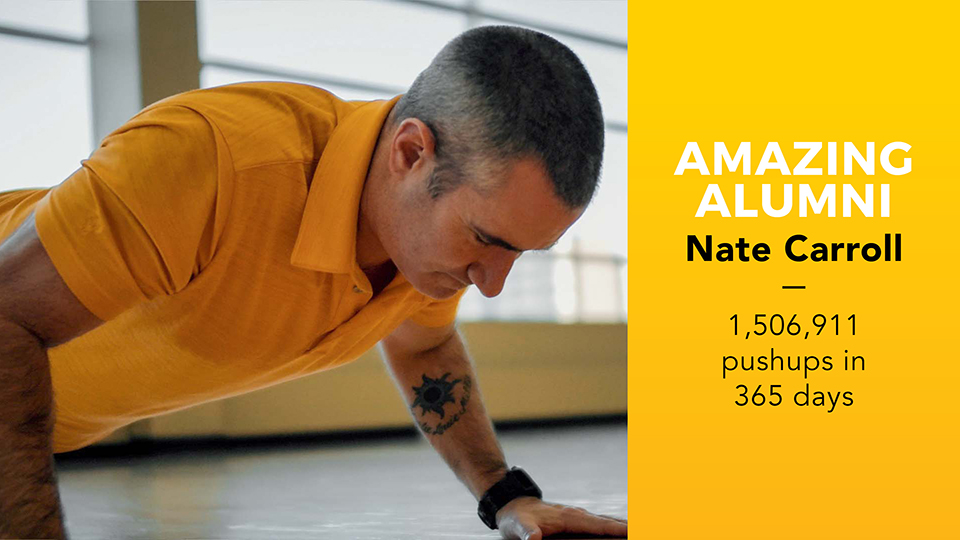 How does somebody do 1.5 million pushups in one year?

That’s the essence of the mindset it took for Nate Carroll, a Winneconne father of three and 2000 graduate of the University of Wisconsin Oshkosh, who last summer set a new world record for the most pushups in a year.

“I just focused solely on what’s the next chunk of time—what’s the next four hours? What do I have to get?” he said. “I just broke it down day by day, hour by hour.”

Carroll broke the previous record, which had stood for 32 years, on June 6, 2021 at MetLife Stadium in New Jersey. His historic effort was part of the festivities during the 48th Fun City Bowl, an annual full-pads football game between New York City firefighters and police officers. 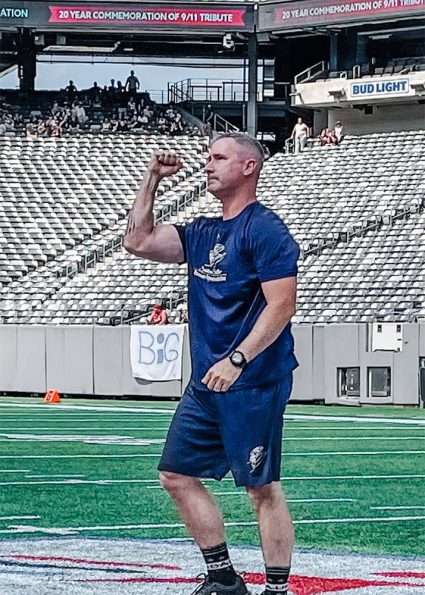 Nate Carroll pumps his fist after setting a new world record for pushups in a year at MetLife Stadium in New Jersey.

The year-long journey from June 14, 2020 to June 13, 2021 also was a fundraiser for the Tunnel to Towers Foundation, a nonprofit that provides financial support to the families of first responders who’ve died in the line of duty, Gold Star families and catastrophically injured veterans and first responders. Tunnel to Towers was established after 9/11 in honor of New York City firefighter Stephen Siller. In 2019, that foundation, started by Siller’s family, paid off the mortgage for the family of Appleton firefighter Mitch Lundgaard, who was killed that spring in a shooting.

“It’s important to me to contribute—to contribute to those who contribute to us,” Carroll said. “My sister and my sister-in-law are both police officers and just kind of being aware of what they do and that they are there for us, sometimes in our darkest hours, is important.”

Setting an example for his children—ages 14, 12 and 11—was another motivation. He wanted to show them how focus and effort can lead to success, even if the end goal seems impossible.

“I really wanted this challenge in part for them to recognize that regardless of how difficult something is or if somebody says you can’t do it, if you’re willing to put in the work and commit to something and grind through it, great things can be accomplished,” he said. “I really wanted them to see what goals that look impossible look like up close, so hopefully when they are my age and they pursue whatever passions they have they can do it with a little less hesitation than maybe I did when I was younger.”

A native of Manawa, Carroll joined the U.S. Marine Corps after high school. Now 46, he was honorably discharged around the time he earned his bachelor’s in social work from UW Oshkosh. He used that degree to become a licensed social worker and has worked for nearly two decades at the Wisconsin Resource Center.

Although he was into sports in high school, it wasn’t until his time in and after the Marines he began to dedicate a lot of time to physical fitness. (News flash: You do a few pushups in the military.) Even without the one-year pushup record, Carroll’s list of athletic accomplishments since his late 20s is medal-worthy: He’s run both marathons and ultramarathons; he’s completed two Ironman races (2.4-mile swim, 112-mile cycle and 26.2-mile run); and maybe most impressively, completed the 31-mile Glacial Trail 50 race while mixing in 5,000 pushups along the route.

As for strictly pushups, he’d always counted them during workouts and around 2010 he set and accomplished a goal of 100,000 for the year. He continued to build from there and in 2019 he hit 1 million, which then made the world record seem feasible.

“I started kind of getting that in my mind, that if I can do 2,000 pushups in a day I can probably do 3,000 in a day,” he said. “You know, you don’t just wake up one day and decide to knock something like that out. It doesn’t work that way. It’s 15 years of working, working, working and then you get to the mindset that you can do it.”

In the early days of the COVID-19 pandemic when much of society had shut down, he attracted local media attention for another incredible accomplishment: He ran laps around his house for about 17 hours and totaling 50 miles. That, too, was a way to give back. He raised a few thousand dollars for the Oshkosh Area United Way and for Winneconne area police and firefighters. 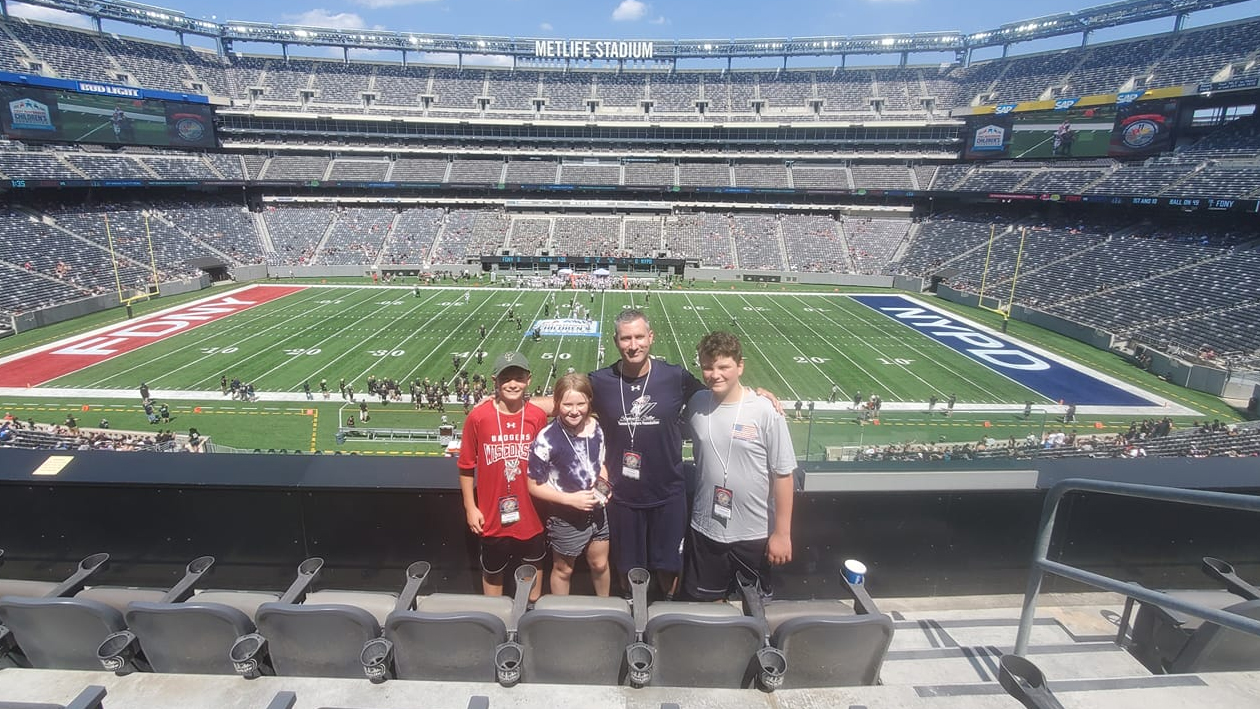 UWO alumnus Nate Carroll smiles with his children after breaking the world record for pushups in a year in New Jersey.

To get to 1.5 million pushups in a year, it helps to be a morning person.

Carroll said each day he’d wake up at 4 a.m., get in a quick bite to eat and a stretch, and then begin about a two-hour pushup routine. He’d knock out a series of sets of 25 to 35 pushups every five minutes. At the end of the session, he’d have about 2,000 in—so, half of the day’s target. The others he’d find time for, whether during down time at work or later on back at home.

When working toward a goal, especially one as outstanding as a fitness world record, life always presents “attractive excuses” to not do what you need to do, he said. So the hardest work is often mental. For Carroll, all he had to do was remind himself why he was doing what he was doing.

“I get to get up and do pushups in my pajamas in my nice warm living room,” he said. “I have the TV on, I have my coffee, I have my kids and my cats there. Life is good. For the families of these first responders who lose their mom or dad, they don’t have that luxury. My misery is just getting up doing pushups in my pajamas—you know, poor me. … Any one of these families would trade doing a few pushups in their pajamas for having their loved ones back.”

The attention from Carroll’s mission—which included coverage from Fox News, Newsweek, Men’s Health and an assortment of local and regional outlets—led to about $50,000 raised for Tunnel to Towers. When his 365-day run came to an end last June, his pushup tally finished at 1,506,911. (Notice the last three digits? Not an accident.)

In the time since, Carroll has backed off from pushups, in part because of a sore elbow. But he’s by no means taking it easy: He’s more than a month into his plan to run three miles every day in 2022.