After years of preparation, UWO wrestling’s Beau Yineman is ready for the national stage 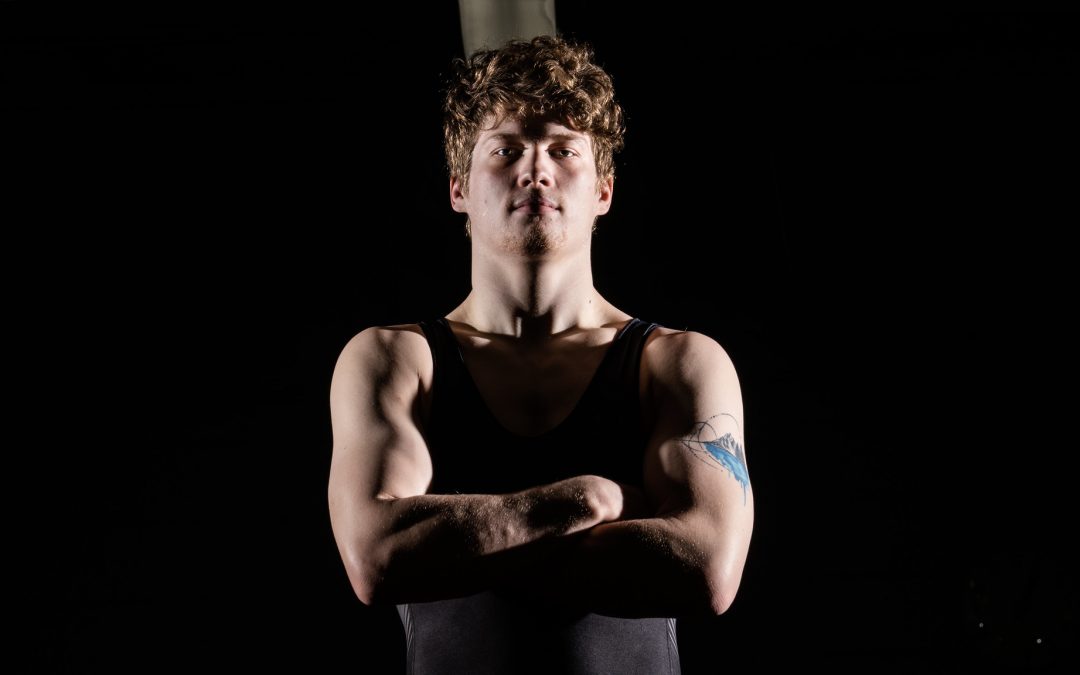 Beau Yineman has waited three years for this.

It was the weekend of Feb. 22-23, 2019 when Yineman, then a freshman University of Wisconsin Oshkosh wrestler coming off a decorated high school career in Neenah, came up one match short of qualifying for the NCAA Division III Wrestling Championship.

His fourth-place finish at 197 pounds in the regional tournament ended a trying first year of college competition. But Yineman, and those who know him, knew he’d be back—and next time there’d be no coming up short.

Yineman, now in his fourth year as a UW Oshkosh student, returned to the regional tournament late last month and three years and three days after his first and only shot at qualifying for nationals. Although he dropped a match to an opponent he’d previously defeated, he came through the losers bracket to place third.

That makes him one of three Titans—the others being senior Jordan Lemcke and sophomore Preston Morgan—who’ll compete for national titles Friday and Saturday at the Alliant Energy Powerhouse in Cedar Rapids, Iowa. 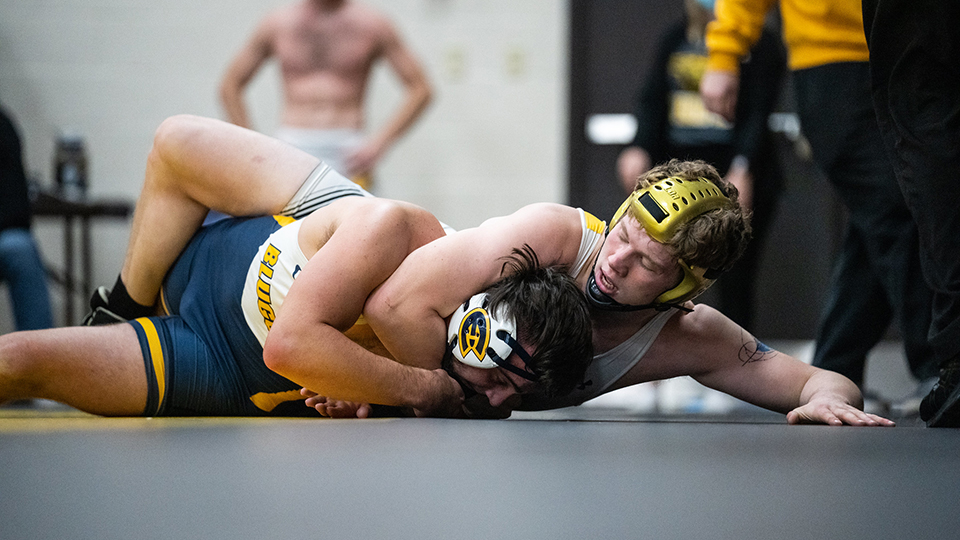 Beau Yineman, who won a wrestling state title at Neenah High School, now has a shot at the top prize in Division III.

“I did have a successful freshman season and I felt successful,” Yineman said. ” … at the same time, I have the picture of me from my freshman year on the regional podium and it’s something I look at—like, I’m not going to do that again.”

To understand why a fourth-place finish as a freshman became motivation, it helps to know where Yineman came from. Just a year prior, he capped an undefeated senior season at Neenah High School with a Division 1 state championship at 195 pounds. His record that year: 45-0.

It took three years for Yineman to get another crack at qualifying for the NCAAs because of matters both in and out of his control. When he came to UWO after high school and began to work toward a degree in physical education, he knew his college journey would be longer than four years. So to set up a senior wrestling season during his fifth academic year, he opted to take what could have been his sophomore season off. It’s a practice known as “gray-shirting.”

“Academically, I’m a phys ed major and there’s a lot of credits with phys ed,” he said. “Most people I talk to in the major are taking five years, so the plan was to gray shirt that year and then wrestle three years after that and have had a little bit of development go on (during the off year).”

While not with the UWO team, he trained on his own and competed in several open tournaments. Sometimes those tournaments included his Titan teammates. Sometimes he’d even wrestle them.

“He had an unbelievable year,” UWO head wrestling coach Efrain Ayala said of Yineman’s season away from the program. “He won multiple tournaments, I think he got over 30 matches in that year and he traveled all over the U.S.”

Yineman said he accomplished what he set out to with the gray-shirt year. He gained experience and improved, saw a lot of action and was ready to go heading into the 2020-21 season.

The plan to return in his third year of school was, of course, thrown to the mat by the pandemic. Months of uncertainty, canceled events, limited ability to practice and other circumstances led to a truncated season and no regional or national possibilities.

Still, Yineman was strong when he was able to compete and ended the improvised campaign with a Wisconsin Intercollegiate Athletic Conference (WIAC) title at 197 pounds. He entered the conference tournament as the top-ranked Division III wrestler in his weight class and left it as the first Titan to win its title since the category began in 1999.

The momentum carred into the following month, when in March 2021 he competed in the USA Wrestling Senior Nationals Freestyle Tournament, featuring some of the top college athletes in the country. He earned All-American status with an eighth-place finish.

“That’s a huge thing for a DIII athlete,” Ayala said. 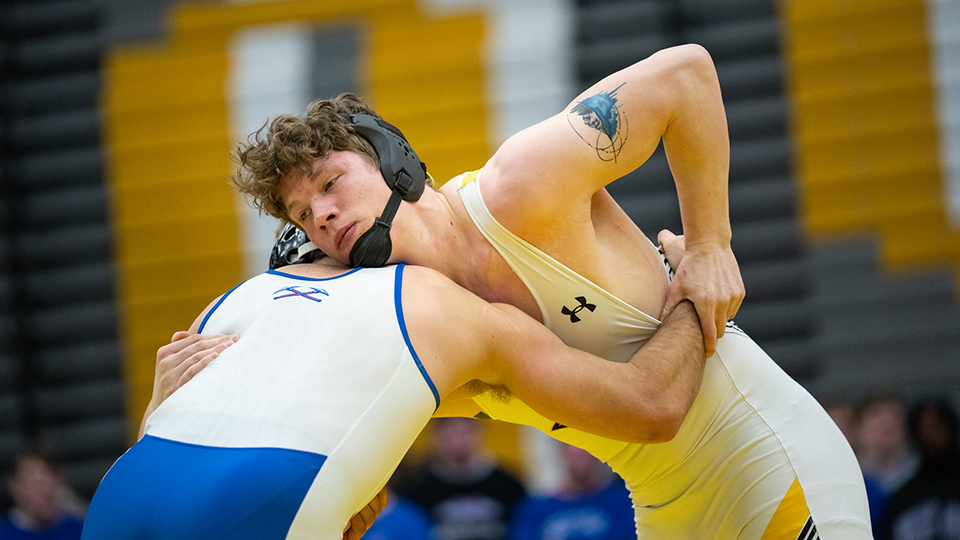 Beau Yineman, a senior physical education major, has 71 wins and nine losses in his wrestling career at UWO.

Because the pandemic-shortened season didn’t count toward athletes’ eligibility, Yineman entered 2021-22 as a sophomore wrestler while in his fourth academic year. Finally with a chance to set right what went wrong his first year, he came in older and more mature both physically and mentally.

“Wrestling-wise and life-wise, college has helped me in a lot of ways, in terms of maturity,” he said. “Out of high school I thought I understood a lot of things and sometimes you think you have it all figured out with what you believe.”

Yineman said he realized that while wrestling is important to him, it’s not all he is. He’s striving to become a teacher, and that helping people means a lot to him. He’s also a Christian and his faith is a significant part of who he is.

“I see my faith as something that gives me a lot of purpose,” he said.

“We have one goal for him and that’s to be a national champion,” Ayala said. “He has the same goal for himself. … I think just kind of remembering how he missed the national tournament his freshman year and those years in between, it was a struggle, but he was able to overcome it and now he’s ready.

“He’s probably in the best shape mentally and physically he’s ever been in,” he said. “We’re pretty excited moving forward from here.”