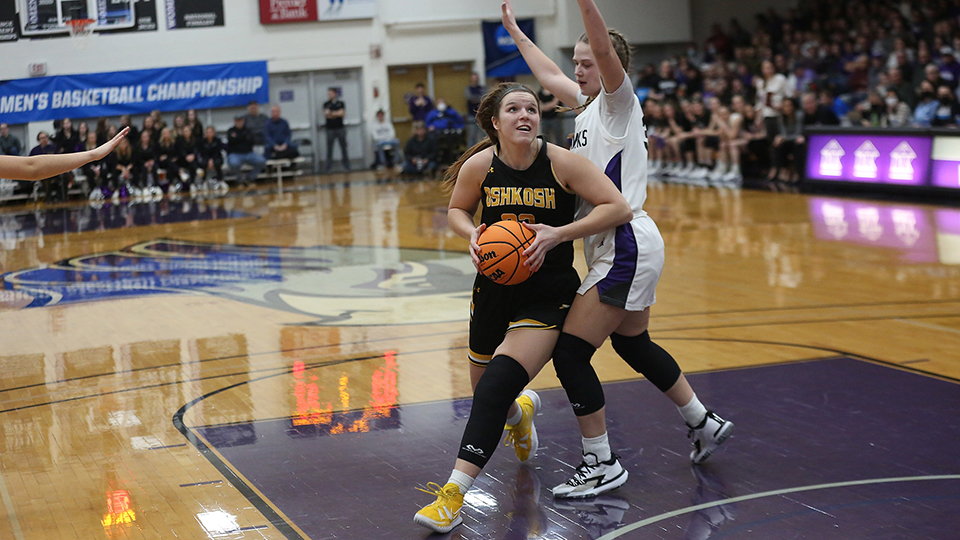 The University of Wisconsin Oshkosh women’s basketball team’s scintillating run in the NCAA Division III Championship came to an end in the Elite Eight on Saturday in Whitewater.

UW-Whitewater (27-4), ranked 12th in the country by D3hoops.com, trailed for a majority of the night until scoring the final nine points to secure a 68-62 win and clinch a spot in the Final Four during the fourth meetings between the programs this season.

UW Oshkosh (22-7), which had knocked off three straight nationally ranked teams to reach its first Elite Eight appearance since 1999, took a 62-59 advantage following a Jenna Jorgensen 3-pointer with 2:51 remaining, but the Warhawks began their comeback with an offensive rebound and layup 14 seconds later before taking the lead for good at 64-62 on a Kacie Carollo 3-pointer with 1:59 to play.

Carollo accounted for the final seven Warhawks points over the final two minutes as UW-Whitewater ended the sectional final owning the lead for just 5:36 on the night.

UWO maintained a lead for more than 20 consecutive minutes until UW-Whitewater tied the score with 7:42 left in the game.

UWO was making its sixth appearance in the Elite Eight and the first since back-to-back trips in 1998-99. The Titans, who earned one of 20 at-large berths into the 64-team NCAA field, reached the quarterfinals by knocking off 18th-ranked Wisconsin Lutheran College during the first round, fourth-ranked Simpson College in the second round and 10th-ranked Baldwin Wallace University during the sectional semifinals.

The Titans also made a national quarterfinal appearance in 1994 before finishing as the runners-up in 1995 and clinching the 1996 Division III title.

Nikki Arneson led the Titans with 21 points Saturday, shooting 7-for-13 from the field, 3-for-7 from 3-point range and 4-for-4 at the free throw line. Arneson, a 2022 All-WIAC First Team selection, caps her career ranked 18th in program history with 1,082 points.

Porath made a pair of 3-pointers on the way to upping her career point total to 1,405 points. Porath, the fourth Titan to eclipse 1,400 points, was a consensus All-American the past two seasons and a two-time WIAC Player of the Year.

Rebekah Schumacher led all players with 22 points after going 6-for-16 from 3-point range.

Aleah Grundahl, the 2022 WIAC Co-Player of the Year, and Carollo added 14 and 13 points, respectively, for UW-Whitewater while Johanna Taylor chipped in nine points, nine rebounds, six assists and three blocks.

UWO held UW-Whitewater scoreless until the 3:09 mark of the first quarter before the Warhawks rallied to take an 8-7 edge into the second period as the familiar rivals combined to shoot 6-for-26 from the field and commit eight turnovers.

Kaiser drove for a layup to pull the Titans even at 9 early in the second quarter. Porath then drilled a 3-pointer for a 12-9 lead, and another 3-pointer by Arneson with 7:50 left before intermission provided UWO a 15-12 advantage it would not relinquish until the fourth quarter.

The Titans led by as many as eight points on three occasions, including a 28-20 cushion after a Jorgensen 3-pointer with 23 seconds to go in the second quarter. UWO also matched its largest advantage at 30-22 following an Arneson layup at the 9:40 mark of the third period and again at 50-42 on Osterman’s jumper with 44 ticks to go during the third quarter.

Jorgensen made a pair of free throws to increase the Titans’ tenuous lead to 52-49 at the 8:34 mark of the final period. However, Schumacher drained a tying 3-pointer ahead of two Grundahl free throws that provided the Warhawks a 54-52 edge.

UWO reclaimed the lead two more times as Arneson scored in the paint for a 56-54 advantage and a Jorgensen 3-pointer put the Titans ahead, 62-59, with 2:51 left.

UWO and UW-Whitewater were meeting for the fourth time this season and the second time during the NCAA postseason. The home team was victorious in each of the four contests in the season series as the Warhawks won three of the matchups by a combined 12 points. UW-Whitewater also defeated the Titans during their only prior Division III Championship meeting in the third round of the 2014 tournament.

The Titans, the lone unranked team competing in the Elite Eight this season, finished the season with a 5-3 record versus opponents ranked in the top 18 in the D3hoops.com poll.