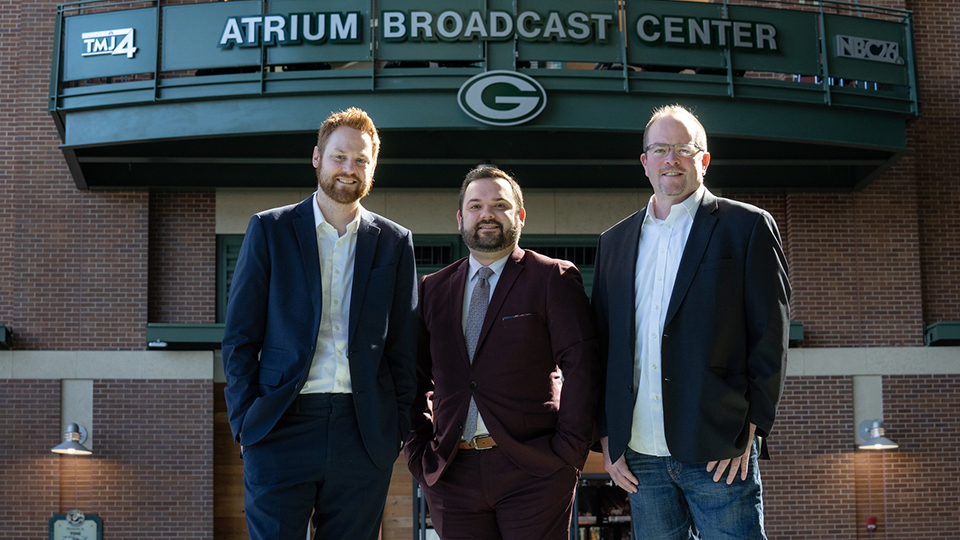 It’s hard to argue with Griffin, who earned his radio TV film (RTF) degree in 1995 and now is headed toward his third decade working in sports at WFRV.

There are days when Griffin’s out covering an event when he might look to his left and see fellow RTF grad Ryan Wing. Wing, a 2009 grad, is the sports director at WLUK. And to his right could be Brandon Kinnard, another RTF alumnus. A 2014 grad, Kinnard runs the sports department at WGBA.

There are plenty of ways to observe the power and prestige of the RTF program at UWO. The recent Teaching Excellence Award from UW System certainly is one. In northeast Wisconsin, another way is just to see who’s at the helm of the Packers or Badgers beats on the local news.

Chances are it’s a Titan.

“You can’t get too far in the Wisconsin TV industry without running into fellow Oshkosh people,” Kinnard said.

Wing agreed, saying in his newsroom it’s a “point of pride.” If there’s a new colleague with UWO on their resumé, he said, he knows they’re going to have what it takes to succeed.

Here’s more on the trio of Titans leading local sports coverage—both in front of the camera and behind it—in the Green Bay market. 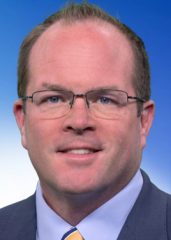 Career journey: He began a six-month news stint at WLUK days after graduation but left to do sports at WFRV that same year. He’s climbed through the ranks and now has led the sports department for 10 years.

Current responsibilities: He runs the five-person sports team and at any given moment could be serving as anchor, producer, editor, writer, photographer, you name it.

“Basically guiding the sports department to cover everything from the Green Bay Packers to college sports to high school, outdoors, recreation, fishing, hunting—if it has to do with the sports world, I’m the one in charge of giving it direction.”

During football season, he hosts three weekly half-hour shows. Green and Gold Game Day airs Sunday mornings before Packers games. Locker Room is another Packers show, this one with a player co-host and player guests. Sports Xtra is a year-round sports variety show. A high school version of Sports Xtra, which he created and ran for 20 years, was rolled into Friday night’s regular newscast when the pandemic put high school sports on pause.

While at UWO: Griffin not only covered sports while in the RTF program, he participated—he spent four years playing offensive line on the Titans football team and was a captain in 1994. When not in the trenches, he was doing play-by-play for several sports and he created a weekly SportsCenter-like show called Inside Pitch that ran for several years.

Why Oshkosh? When looking for a school that met what he was looking for both for broadcasting and football, UWO was the answer. “It had the right feel, my mom loved the head (football) coach and when I walked on campus it was the right fit,” he said.

Favorite work experiences: Highlights including covering the Packers’ three most recent Super Bowls and the Badgers’ 2015 NCAA Tournament run. In 1998, he spent 10 days in Tokyo covering a Packers preseason game as part of the American Bowl series. “That was an experience I’d have never gotten if I didn’t have this job,” he said. “I would have never been able to go to a place like that—a 14-hour flight from Los Angeles and be in the world’s biggest city by population at the time and be completely enthralled in the culture of a place that even at that time was starting to love and understand American football. To see that first-hand was pretty impressive.” 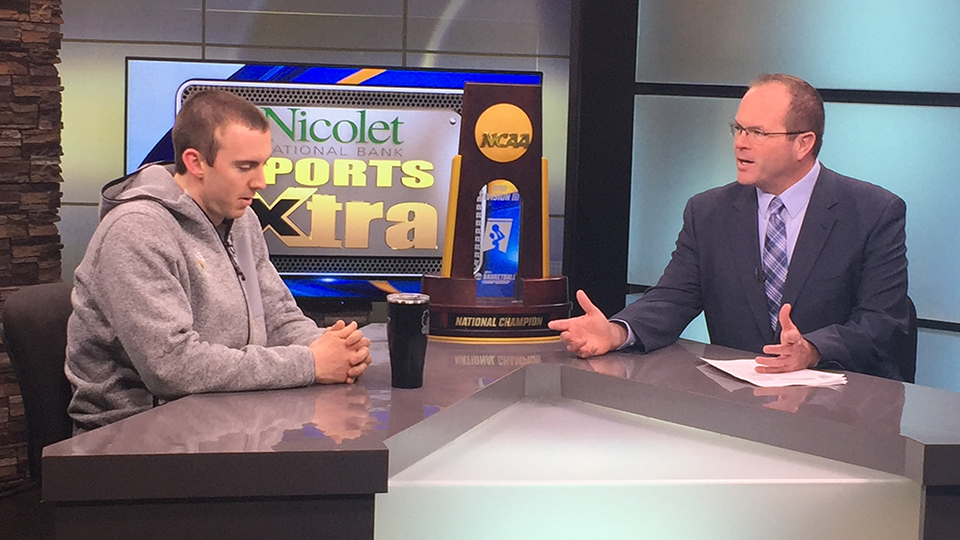 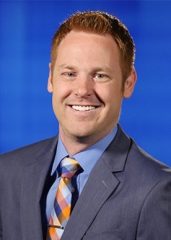 Career journey: His first job after graduation was on a morning news show in Wausau. While there he slowly moved into taking on more sports duties. After about three and a half years he took a job in Bend, Oregon. Out of the country’s more than 200 TV markets, it’s among the smallest, but it was a sports director position and he knew he’d someday get to use the experience to return to Wisconsin. About three years later he was back in his home state, first at the NBC affiliate in Madison and then with Badger Sports Report, which now airs on Bally Sports Wisconsin.

He joined WLUK as a sports anchor and reporter in 2018 and last year became sports director.

Current responsibilities: Wing leads a five-person sports department, anchors five nights a week and jumps in wherever and whenever  necessary. During the Packers season, he hosts the half-hour Inside the Huddle with a player guest each week.

While at UWO: He was a member of the National Broadcasting Society and spent as much free time as possible with Titan TV and other media projects. “I was one of the people that helped create a show called Inside the Locker Room, which was like the SportsCenter of UW Oshkosh,” he said.

“Classes are great but where I learned the most was doing the hands-on stuff. Classes teach you what you need to do but that shows you how to do it in real-life experience.

Why Oshkosh? “I toured like four or five other schools,” he remembered. “I wanted to go to Madison because I grew up a big Badgers fan … but they didn’t really have exactly what I wanted for hands-on stuff. And I knew that Oshkosh did.”

Wing knew in his first year in the RTF program he’d be able to report on games, do play-by-play and get other experience not necessarily available elsewhere.

Favorite sports broadcasters: Growing up, ESPN’s Stuart Scott was one. Gus Johnson and his high-energy play-by-play stands out today.

Favorite work experiences: His best memories include a handful of the Badgers’ NCAA Tournament runs and the 2017 Orange Bowl, where Wisconsin defeated the University of Miami. At the top of the list, he said, is probably following the University of Oregon football team in 2015 as the Ducks won the Rose Bowl and then lost to Ohio State in the first-ever College Football Playoff National Championship.

Career journey: Shortly after earning his degree, he landed a sports reporter job in Wausau. He later became the station’s sports director. He left in 2018 for North Dakota, where he worked as a play-by-play announcer in both TV and radio. In July 2019 he came back to Wisconsin and joined NBC 26.

Current responsibilities: “It’s so hard to narrow down because so many days look different,” he said. His primary job is to anchor and produce the sports segments each day. “I’m our sports director and that includes a lot of anchoring, but in my job there’s a lot of reporting too—actually getting out in the field and talking to the players and coaches and whoever it might be.”

While at UWO: Kinnard spent much of his time outside of class working either with Titan TV or WRST-FM. He had student leadership positions at both. “I wouldn’t have had time for anything else, I’ll put it that way,” he said.

Why Oshkosh? After a short stint at the University of Minnesota, Kinnard wound up enrolling at UWO because a friend urged him to do so. He was aware of the RTF program, but said he really “stumbled into it” as a 19-year-old not sure what his future held. “It was one of the best things that ever happened to me,” he said. “The program ended up being amazing. I’ve made so many good friends, I met my wife at UW Oshkosh. It was kind of by chance but it worked out so well.”

Favorite work experience: “If you would have told a 15-year-old me I was going to have an office at Lambeau Field, I would have said you were crazy,” he said. “There’s an office with my station’s name on it at Lambeau Field and I go there to work, for my job. I couldn’t have wrapped my head around that when I was 15 years old.”