‘Everything revolves around the military member’s job’: UWO students of military parents learned to adapt, be resilient 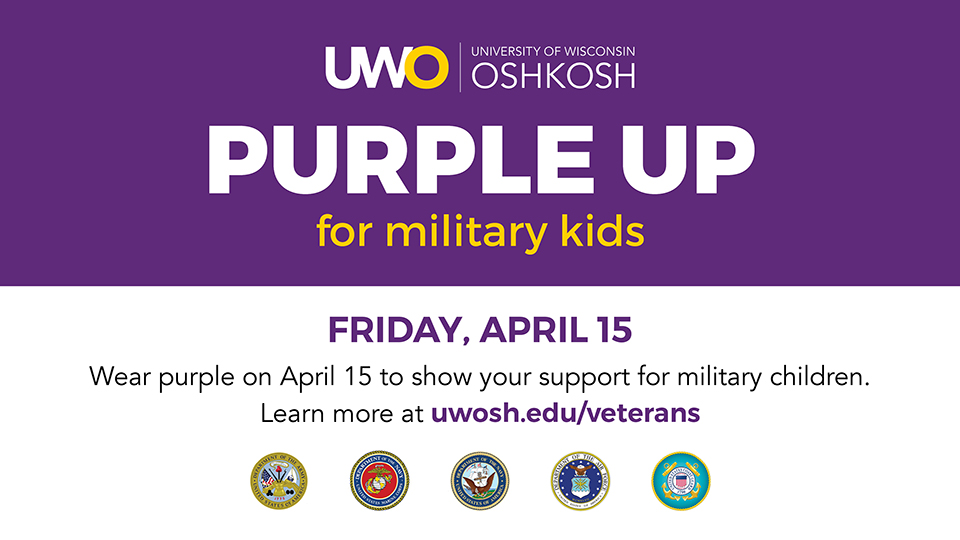 Two University of Wisconsin Oshkosh students have faced unique challenges as children of a service member and they are telling their stories as part of this month’s Military Child Appreciation Month.

“We as veterans can’t do what we do in the military without the support of the people back home—the communities, the families waiting for us to come back,” said Aaron Kloss, UW Oshkosh Veterans Resource Center coordinator, who noted that more awareness is needed on the struggles and challenges faced by children. He said estimated there are 200-250 children of service members at UWO.

Purple Up! For Military Kids Day is Friday, April 15. People are encouraged to wear purple to show their support. 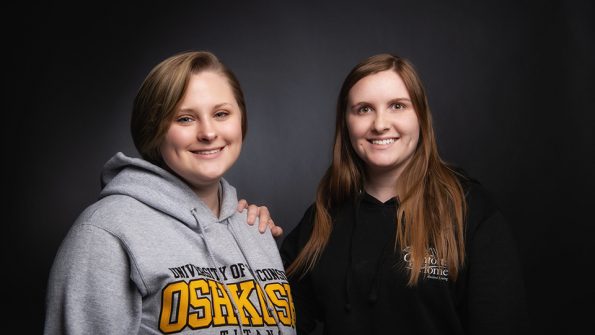 UW Oshkosh students Haley Olson, left, and Corrie Gifford know what it’s like to be the child of a service member. Olson’s father and Gifford’s stepfather both served long careers in the U.S. Army.

UWO student Haley Olson is working toward a social work degree so she can help military veterans and their families.

Olson, a junior who was born in Salt Lake City, Utah, said she considered serving in the military, just like her father, grandfather, great-grandfather and several uncles. Asthma and an allergy to wheat put a lid on her ideas of serving, but she vows to still be part of it.

“The call to serve runs deep in my family and I am no exception,” she said. “I have just chosen another path.”

Her father served 32 years in the Army and retired as a colonel when she was in high school. Her parents decided to make Wisconsin their home as it would allow her to finish high school in one place—at Sparta.

“I grew up always moving around and having to deal with new experiences in the process,” she said. “I have lived at 11 addresses so far in my life because of my family moving from place to place.”

She remembers her father being gone a lot—getting up early and working long into the night. He also left for weeks or months at a time, so responsibilities of child-rearing and running a household would fall on her mother.

Olson has a twin brother, and they relied on each other while growing up.

“Sometimes I found my father being gone did leave me with some resentment and sadness while it was happening,” she said, “because I missed him and wanted him to be around for celebrations like my birthday.”

When her family moved, Olson and her brother would lose all their friends. The siblings became even closer since they would not know anyone else.

“There is a type of lifestyle that comes with being a child of a parent who is in the military because everything revolves around the military member’s job,” she said.

The moves affected Olson’s schooling. She said there were some subjects she missed by moving to a new school if they were past that lesson or topic.

Despite the challenges, Olson said she would not trade them because they allowed her to see a variety of cultures, meet new people, adapt and be more independent. She believes living in a dorm was easier as she was introduced to new experiences and environments since she was little.

“I carry a lot of pride because my family served,” she said, adding she will be connected forever to the military.

Corrie Gifford, a senior student from Menomonie in the College of Nursing, said her stepfather, a petroleum supply specialist in the Army, served three tours of duty before he was medically discharged with a diagnosis of post-traumatic stress disorder (PTSD).

Gifford said she recalled being 10 or 11 and her mom making lots of Skype calls and texts when her stepfather was deployed.

“I know that it was hard on my mom because that year for Christmas she didn’t even want to put up the tree as our family was separated,” she recalled. “So my sister and I decorated the tree ourselves. I feel like when one parent leaves the eldest kid does have to step up in a way, because being a single parent is hard.”

When her stepdad returned, it would be tough getting things back to normal. She became so used to caring for her sister and taking on more chores around the house that when he returned, she was scolded for excluding her stepdad from parenting and other duties. Her mother, too, had gotten into the habit of asking her to do things.

“I know when veterans return there is a program for transitioning back to civilian life, but I feel like there should be additional resources for families as well,” Gifford said.

The aspiring nurse said she believes she picks up more tasks at home than typical students―especially with her stepfather’s PTSD diagnosis.

“There are days where you are walking on eggshells … or you must call your mom home from work so she can talk to him because you cannot,” Gifford said, adding there is a lot that changes with military parents. “I know I didn’t realize how different my upbringing was until I started talking about my life in high school and college.”