The University of Wisconsin Oshkosh Dance Team continues to celebrate after capturing its first-ever national championship―winning Division III Pom at the Collegiate Cheer and Dance Championships at Daytona Beach, Florida. 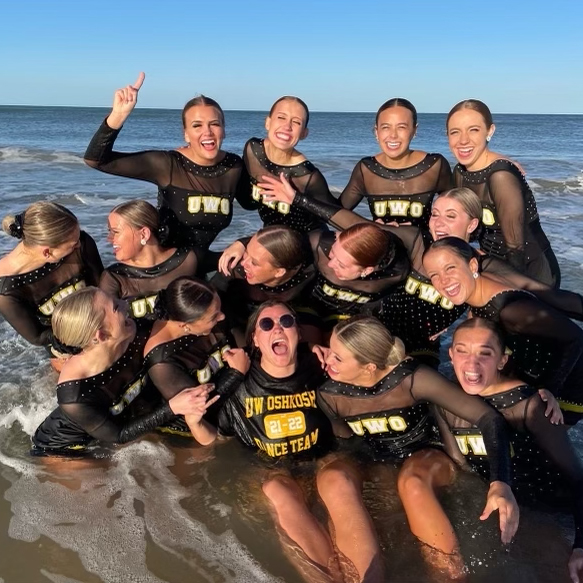 The UWO Dance Team meets three nights a week for 2.5-hour practices. They also work out to keep up their strength and stamina.

The 15-student UW Oshkosh team walked away as best in the country—much to the delight of a large Titan fan base that traveled to the national competition.

“UWO was one of 100-plus teams from all over the United States that were there to compete and that’s just for dance teams,” said Molly Wandersee, team adviser who works as an academic adviser at UWO. “They had to qualify for nationals by completing a tryout camp and worked hard that weekend to make it to the big stage. The energy there is contagious and they brought their best.”

UWO competed April 7 and made the cut to the next day’s final round. In addition to their championship in Pom, they made the podium placing third for Division III Jazz.

Wandersee said the team had practiced since September and performed at football games, local dance competitions and basketball games since November.

Leeah Justman, a junior from West Bend majoring in special education and elementary education, was pom captain, tasked with choreographing the routine.

Justman said performing and competing after losing much of two seasons to COVID (they were denied the chance to compete at nationals in 2020 and missed the entire 2021 season), made this year extra special.

Themes were chosen that were unique and related to the pandemic. The jazz song was World Gone Mad—about how crazy the world can get and how hard people try to escape the crazy world around them. Pom had a mix of songs that had the word “runaway” in them—signifying running away from a sad time (pandemic) and running to a more positive time.

“Our songs related to getting away and persevering through those tough times and coming out on the other side,” Justman said.

Jenna Riche, a senior from West Allis, will graduate with degrees in elementary education and special education, said she joined as a freshman because she loved to dance and knew she could build lifelong friendships. Riche served as president of the dance team club.

“I knew that being on a team would surround me with like-minded individuals who had the same passion that I do. Winning the competition felt like a dream,” Riche said, adding that the pure joy from each dancer as they won was “unreal” after working so hard to get to the national stage and earn a title. 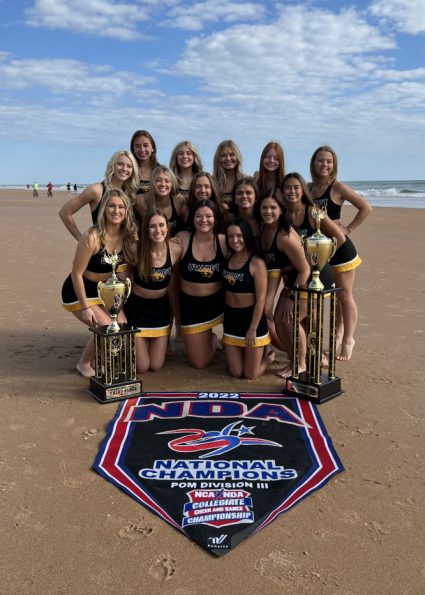 Kayla Juds, a senior nursing major from New Berlin who is graduating next month, said the championship culminated her 19 years of dance and perfectly capped her time with the UWO team.

“I knew this going into nationals and all I really wanted to do was have an amazing performance with this past years’ team I have grown so close to. My last performance was our pom routine, and I can say for myself and most of the team would agree, we really put our whole heart and effort into it. Stepping off stage I was an emotional disaster but was just so happy that I got to leave dance with that last performance.”

Juds said when UWO was announced, she was “beyond excited and honored to be a part of this team.”

The women said they felt the win also honored past members who, because of COVID, didn’t get to finish out their last year dancing at Daytona. One such alumna, Lauren Labrasca ’20, came back and helped this year’s team with choreography and ensuring it was at a top collegiate level.

Justman said when UW Oshkosh was called for first place, they jumped up to grab their big trophy and hugged each other as friends and family cheered and yelled from the front row.