by Shane Nyman | May 2, 2022 | Education and Human Services, Features, Fine and Performing Arts 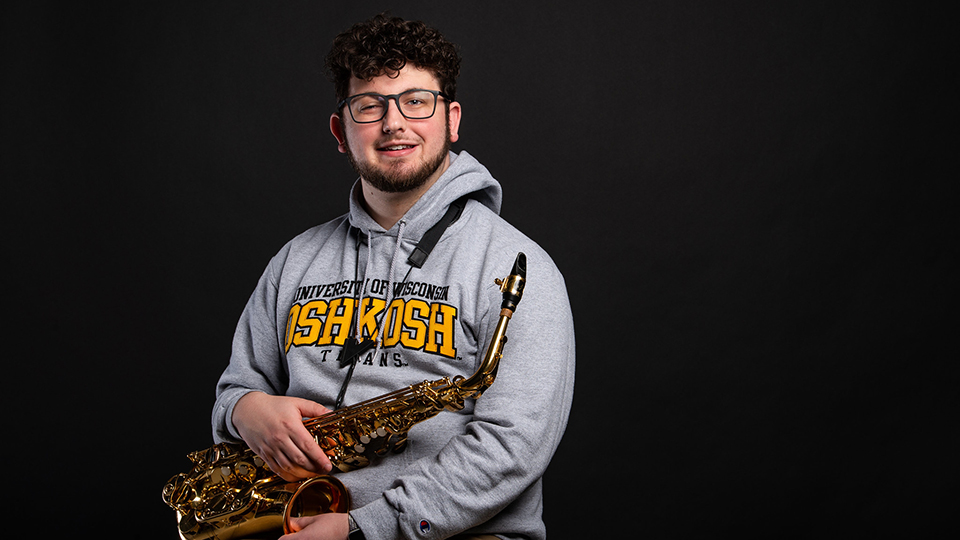 He may always have a smile on his face, but it’s been a trying two and a half years for Eddie Stuczynski.

And not for the reasons you’d think for a northeast Wisconsin college student. Sure, the Neenah native began his pursuit of a music education degree at the University of Wisconsin Oshkosh in fall 2019 and that transitional time can be difficult for anyone. He also was just in his second semester—and first living on campus—when the pandemic hit, pushing all UW Oshkosh classes online and disrupting daily life across the world.

But on top of the everyday obstacles facing an 18-year-old and the fear and uncertainty we dealt with in 2020, Stuczynski began to notice a recurring tingling sensation in his face that spring. Soon after came erratic behavior of his right eye. These were the kinds of symptoms that, even in the early weeks of the COVID-19 crisis, were worth heading to a hospital to get checked out.

What was hoped to just be a pinched nerve or some other benign occurrence turned out to be much worse. An MRI in late April revealed a mass in his skull measuring more than 3 inches in diameter.

Eddie Stuczynski, sporting a Karen meme shirt, gives a thumbs up after his last radiation treatment at Mayo Clinic.

“I named my tumor Karen, after the Karen meme,” Stuczynski said. “It was about the size of a medium Cutie or tangerine. It started at the base of my skull and grew up into my skull, kind of pressing up against my brain stem and my optical nerve and my facial nerves, so that’s what caused the facial tingling.

“After we found the tumor it was like 10 days and I was in my first surgery.”

It would be the first of three craniotomies—the surgery that includes opening of the skull—to beat back what was diagnosed as myxoid chondrosarcoma, a slow-growing bone cancer.

Now back at UW Oshkosh after about nearly a year-long hiatus, the cancer is not in remission but parts have been removed, parts have been blasted with radiation and what remains isn’t growing.

Life goes on, Karen and all.

Which, in a way, is how it’s always been.

“(Doctors) said that it has probably been in my head since utero,” he said. “It was probably a lesion at the time but it’s one of those things, it’s bone cancer, it grows extremely slow. And this type of cancer grows even slower. … It was definitely there for 18 years and we didn’t notice anything until that face tingling.”

To honor his journey and to inspire others, Stuczynski has been chosen as the honorary survivor for the upcoming American Cancer Society Sole Burner 5K Run/Walk in Appleton. The 40th anniversary edition of the annual event is May 7.

The spotlight is special for many reasons, but maybe tops among them is Stuczynski’s personal history with the event. Now 21, he’s taken part in the Sole Burner most years since he was about 7 years old. The run/walk became a yearly tradition because of a neighbor and close family friend who for years lived with breast cancer. He was part of a team of participants that included another family friend who died more recently from testicular cancer. 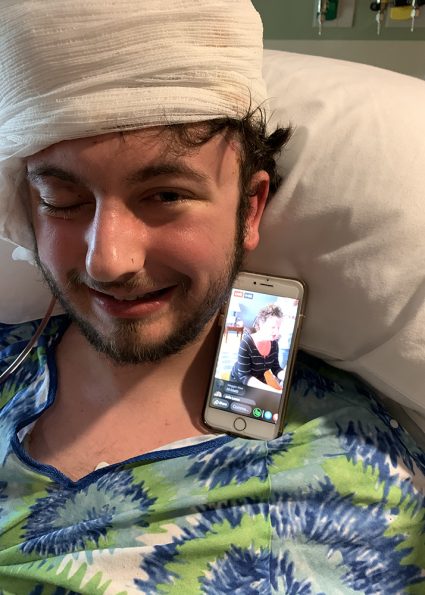 Eddie Stuczynski, shortly after his first craniotomy and early in the pandemic, listens to a friend’s virtual piano performance.

“I am so happy that they thought of me,” he said. “I love to share my story. I love to share it because I can show that no matter what you’re going through, you can get through it.”

Stuczynski has done that—gotten through these past two years—with a remarkable attitude given the circumstances.

Few people on campus know him like associate music professor Drew Whiting, his academic adviser and saxophone instructor. And Whiting, who taught saxophone lessons to Stuczynski beginning in high school, knows that along with the optimism, sense of humor and smiles is a lot of hard work and discipline.

“Over the course of the last year I’ve seen him have this wonderful attitude but also deal with some very real challenges,” Whiting said. “I think sometimes we who know Eddie, we think of him as this cheery, amazing person—and he is that at his core—but there also are these moments where he really has to fight.

“It’s not just the bright and happy person. There’s a warrior under there.”

The nightmarish whirlwind of a brain tumor diagnosis put an end to his spring semester and the series of surgeries that followed kept him away from UWO for about a year. He had to take either incompletes or a failing grade in his classes, depending on a variety of circumstances, and then either finish or retake those courses when he returned in fall 2021.

Stuczynski credits the dean of students office for helping him every step of the way. Specifically, he said, UWO Associate Dean of Students Houa Xiong made sure he had a clear path forward. It’s going to take time, but he’s now likely to graduate in 2024 or 2025 if all goes as planned.

“Honestly, if it wasn’t for them and (Xiong), I probably wouldn’t still be enrolled in college,” said Stuczynski, who now works the front desk in the dean of students office. “She still meets with me on a monthly basis to make sure things are going well. She met with me that often if not more throughout my surgeries.”

He knows the goal of earning a degree is still reachable, it just will take more time to get there than he’d imagined when he first came to Oshkosh. Stuczynski said he’s fine with that and the silver lining is he’ll be older and wiser when he does start his career. He’ll be a better teacher if he takes his time, puts in the work instead of trying to race to the finish.

“His maturity is beyond his age,” Xiong said. “He’s respectful, humble and has a pure heart of gold. I’m impressed by how, no matter what happens, he has the ability to stay positive, strong and continues to focus on his academic, wellness and personal goals.”

Stuczynski said through it all he’s allowed himself to have a down moment here or a bad day there, but he keeps his mind on all the good in his life now and up ahead. It’s that mindset that makes him the kind of person the Sole Burner organizers would want to give a platform to.

“I’ve always been a very naturally optimistic person. … That has always been such a big help getting through this—of course I let myself have that bad day because I deserve it at this point,” he said with a laugh, “but I don’t try and look at the negatives, I don’t look at the bad things that might have happened that day, I try and look at how can I grow from here.”

Eddie Stuczynski (front and center) is a member of both the jazz ensemble (pictured) and symphonic band.