Military Spouse Appreciation Day: A salute to those critical to service members’ success

Jennifer Bonack (front) is proud of her military family. From left: sons Cole and Tyler, and husband, Robert, who all served in the U.S. Air Force.

University of Wisconsin Oshkosh Associate Registrar Jennifer Bonack ’21, knows about the fortitude needed to be a military spouse. She lived 22 years married to an active duty airman and lived in three states, a foreign country and moved at least seven times during those years.

“I don’t think people always realize that it takes a great deal of strength to be a military spouse,” she said. “Military spouses may not put on the uniform every day, but we serve and sacrifice in many ways. There are many challenges that our service men and women face and the military spouse faces those challenges with their service member every step of the way.” 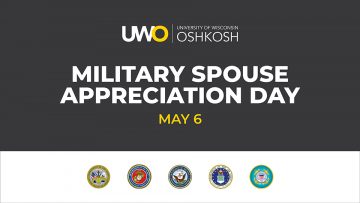 Military Spouse Appreciation Day is May 6—the Friday before Mother’s Day—and recognizes spouses who have great impact on service members and serve the nation in a support role.

Bonack said she and her husband, retired Master Sgt. Robert Bonack, started their journey in 1990 at age 18. He served as an electronic warfare technician and battle management operator in the U.S. Air Force. They now live in Appleton.

“As the spouse of a military member, I was often left to manage the many obligations at home because he was away at training, deployments, etc. … I was the one who had to facilitate moves and all the logistics in a foreign country with two small children. The rental house we lived in was flooded due to frozen pipes, and my husband was half a world away,” she recalled.

Bonack has a lot of pride for her husband’s service as well as the service of both of her sons, her father, her father-in-law and sister-in-law. She feels “blessed” for the life they were given as a military family.

Some spouses have the unfortunate reality of dealing with returning service members who suffer long-term consequences—physical and/or mental—as a result of their service.

Emily Liesch and Michael Taylor, UW Oshkosh social work majors who work in the Veterans Resource Center, noticed the number of dependents, either children or spouses of service members is increasing on campus.

“Many times, the challenges of being a spouse are not heard as the focus is on the veteran or service member,” Liesch said. “The day is meant to acknowledge spouses who are so important to the success of the service member.”

The UWO Veterans Resource Center is dedicated to providing support for military personnel, including active duty veterans, guard members, reservists and dependents of veterans on all three campuses.

The month of May also is host to several other military holidays, including Military Appreciation Month, established in 1999; Victory in Europe (VE) Day, commemorating the end of WWII in Europe on May 8, 1945; and Armed Forces Day, designated in 1949 and taking place the third Saturday in May. Those currently serving will be honored this year on May 21.

Memorial Day, an official federal holiday, is celebrated the last Monday of the month. This year’s holiday is May 30.