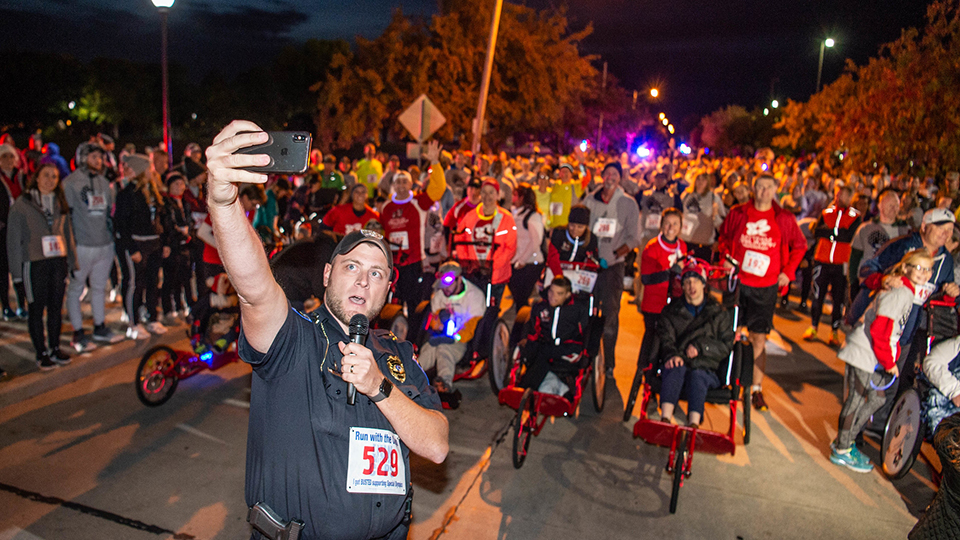 UW Oshkosh Police Capt. Chris Tarmann takes a selfie with participants during the 2018 Run With the Cops event on the Oshkosh campus.

University of Wisconsin Oshkosh Police Capt. Chris Tarmann will represent Wisconsin next month in the final leg of the Law Enforcement Torch Run before the Special Olympics USA Games in Orlando.

He’s one of 50 law enforcement officers chosen—one from each state—to participate in a series of runs and events leading up to the annual competition set for June 5-12. He’s also the officer with the honor of running the final leg before the games get underway. 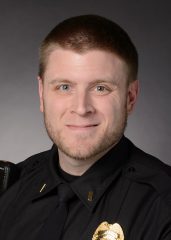 Though he’s not sure who nominated him or why he was ultimately selected as Wisconsin’s representative in the Law Enforcement Torch Run (LETR), Tarmann’s more than a decade of involvement in Special Olympics fundraising is a likely factor. Eight years ago he helped create the annual Run With the Cops event on the UW Oshkosh campus. Held each year in the fall, the Special Olympics fundraiser has collected more than $350,000 since its launch. He’s also volunteered at numerous other fundraisers, including Polar Plunge and Cop on a Rooftop events in recent years.

Special Olympics is a cause he’s grown to love over the years. He said it’s the positivity of the events that has made such an impact.

“It’s interesting because for me, people always ask why do you do so much for Special Olympics? I just kind of think athletes are a pure representation of how we as humans should act and treat each other,” Tarmann said. “I really think if you watch an athlete, they celebrate each other regardless of their place—there’s no judgement about character or flaws and they really show love and kindness unconditionally.

“When you work in law enforcement you do a lot for a community, but not often do you hear the positive feedback. But when I work with Special Olympics it’s always positive. I’m always getting this thought of ‘Why can’t we always act like this as humans?’ It’s so good.”

The LETR is the largest grassroots fundraiser for Special Olympics and includes torch runs, Polar Plunges and other events. Since its inception in 1981, more than 100,000 law enforcement officers around the world have carried what’s dubbed the Flame of Hope.

Tarmann said events like torch runs and Run With the Cops at UWO do more good than just raise money for an important organization. They also can help connect members of law enforcement with the communities they live and work in—something that’s especially important today.

“(The events are) bringing a whole bunch of community members together, where they get to see and interact with law enforcement at a human level,” he said. “It’s a real opportunity to create relationships between community and our law enforcement officials.”