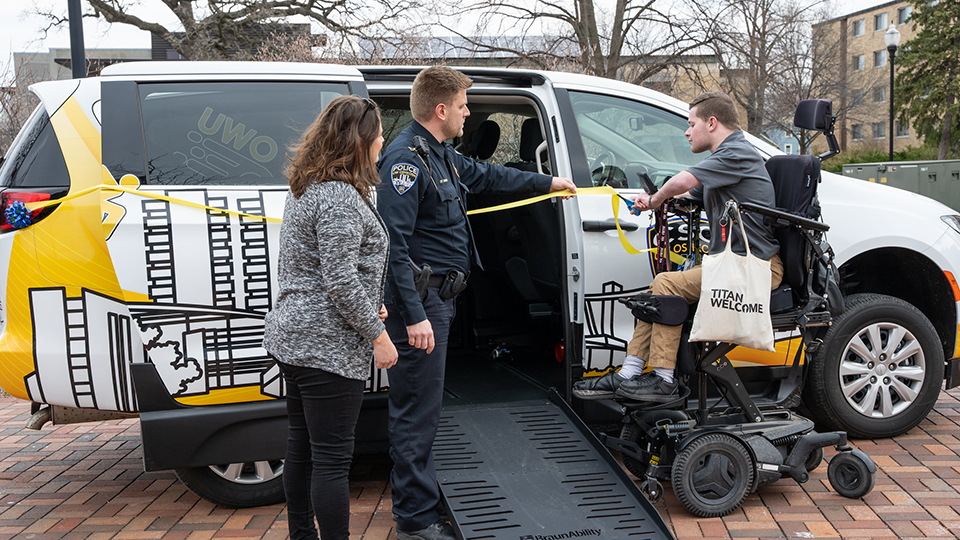 The University of Wisconsin Oshkosh has unveiled a new accessible van, enhancing its ride service with a free transportation option for people using wheelchairs, scooters or other mobility aids.

The van is part of the legacy left by graduating senior Kev Kollman, who uses a motorized chair to travel about. Kollmann said he was involved in discussions about the need for an accessible van prior to the pandemic. The University’s first UWO Go van was put in service Nov. 1, 2019, however it did not offer accessibility for anyone using a wheelchair.

Kollmann, a theater arts major from Fond du Lac, said the efforts of the Accessibility Center, the Oshkosh Student Association (OSA), a very generous donor and others helped make the van a reality. Kollmann has been a member of OSA for three years and he considers the van the final project he’s been a part of.

“When I came here, I was told the administration cares and it shows,” he said.

Kollmann thanked everyone for their support and said he’ll continue his education at Northern Illinois University, where he’ll attend grad school to prepare for a career working in higher education.

Kiersten Karlsen, who is associate dean of students and oversees the Accessibility Center, was pleased to see the van put in service on the Oshkosh campus.

She credited Kollmann for the “emotional labor” he’s exerted to advocate for things that many people take for granted.

“He’s taken on the extra burden and is always the champion for this kind of work,” she said.

Other campus accessibility projects over the past few years include an action track chair that allows travel across rough terrain, adult changing tables in various buildings on campus and a more accessible tour of campus.

University Police Capt. Chris Tarmann said most accessible rides in the community must be requested a day or two in advance.

“We’re going to try to pull it off in less than two hours—maybe in one hour,” Tarmann said.

Titan Stadium, Lot 39, a number of locations on Main Street, a Walgreens and a Pick ‘n Save are all within the service boundary.

More information on the UWO Go boundaries and rules is available on the UWO police department website.