‘Those two are definitely going to make a difference’: Graduating brothers to step right into hometown law enforcement

They started college at different times, they took vastly different routes to get their degrees and they’ll soon start their professional careers at different departments, but the Schlosser brothers remain in step on their greater goal of serving their home community.

The two progressed through the criminal justice program with intentions of entering law enforcement at a tumultuous moment in history. The pandemic interrupted and altered much of their time at UW Oshkosh, and policing in America has come under increased scrutiny in recent years. The two kept working hard, meeting their commitments knowing in the end they could serve the greater good.

“You figure, when they started college, George Floyd was still alive,” said Richie, who served as an academic adviser to both brothers. “They’ve made it through and realize that policing is a different job and that they have to be better. I think that drive to be better, to be an example for not only how law enforcement officers operate but also how we as community members operate, is so different in their heads. It’s like, ‘I have a responsibility as a citizen to help,’ and they’ve turned that into careers.”

Steven graduated high school a year before Ryan and started on the Oshkosh campus with intentions from Day 1 to study criminal justice. He also began a four-year commitment with the Fox Valley Reserve Officer Training Corps (ROTC). After graduation he will serve with the Wisconsin Army National Guard, assigned to the 1157th Transportation Company at Oshkosh.

Just before the start of his first semester on campus he was hired by the UWO police department, and last month he worked his last shift as a community service officer (CSO).

If that wasn’t enough, this past year he served as Vice President-Pro Tempore in the Oshkosh Student Association. It was something he did not necessarily need to bolster his resume, but because there was a void in student leadership at the time, he stepped up. Part of his personal philosophy is simply that: If I don’t step in to help, who will?

“I think I left a good impression on campus and I hope that what I did in my different involvements left things better than when I started,” he said. “I’m going to miss campus. I definitely changed myself over the last four years and it’s going to be kind of sad to leave.” 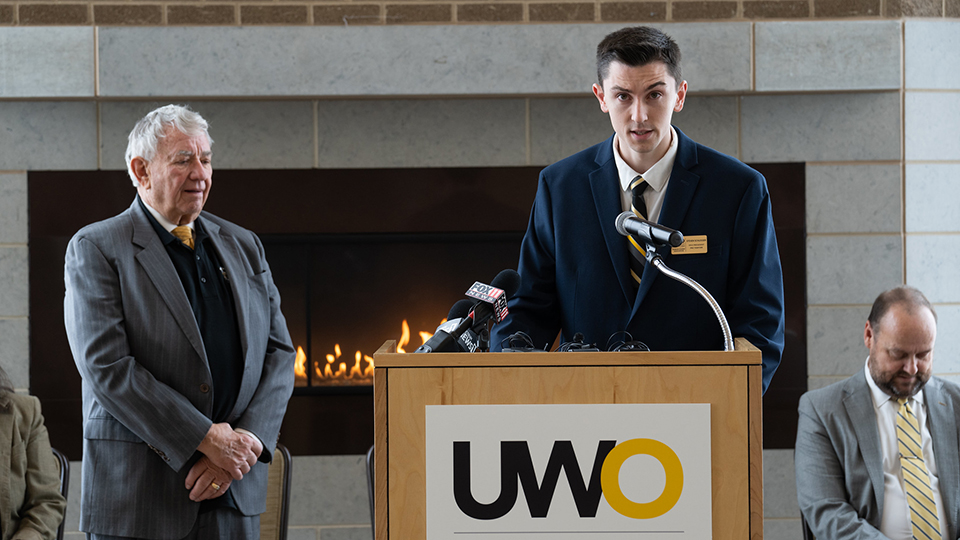 Ryan, meanwhile, got his college career started at UWO’s Fond du Lac campus, earning an associate degree before coming to Oshkosh. With credits earned through the Cooperative Academic Partnership Program while in high school and a steady diet of online courses—including those offered outside the typical fall and spring semesters—he managed to finish the criminal justice program in just three years.

His final semester this spring is dedicated to the 19-week police academy, which the University classifies as an internship. That means, as Richie put it, “he’s ready to work as he’s walking across the commencement stage.”

“I’m definitely proud I was able to graduate early,” Ryan said, “and also I was able to use the resources available to stay out of debt—the different scholarships, working during school—and maintaining good grades.”

From as far back as his sophomore year of high school to the start of the spring semester, Ryan worked as a cook at a Fond du Lac restaurant. He also spent 2021 working as a CSO for the city of Fond du Lac—a role he described as “a good way to get your foot in the door and find out if the career is really for you.”

Policing is for him—and with the academy behind him, Ryan is able to start right away in his new role as patrol deputy with the Fond du Lac County Sheriff’s Department. Steven’s start with the city police will begin with his four months in the academy. (Steven’s ROTC commitments kept the academy off the to-do list while still in school.)

Both started applying for jobs well ahead of finishing their degrees, something they both said would be good advice for future graduates. Both brothers had accepted job offers by the end of January.

“I think with UW Oshkosh, it’s really been more impactful than I’ll know,” Steven said. “Having the degree and everything, being able to be involved in all these opportunities, it’s all because of my time at UWO. … When I think of all these groups, there’s always been advisers, people who’ve been in my shoes, professionals in the industry, whatever it may be. There always seemed to be people looking out for my best interest.”

Richie is just one example of the people who have played a supporting role in helping the Schlossers go from first-year teenagers to adults ready to help make the greater Fond du Lac area a better place.

“The two of them are incredible. … To line up their academic careers to hit all the milestones, to either get done early and go through the academy or balance the requirements of ROTC? They’re a different breed,” Richie said. “It was good to see both of them get hired right out of college, to sort of be the example we look for in students.

“Those two are definitely going to make a difference. And it’s going to be cool to see where they go in their careers.”