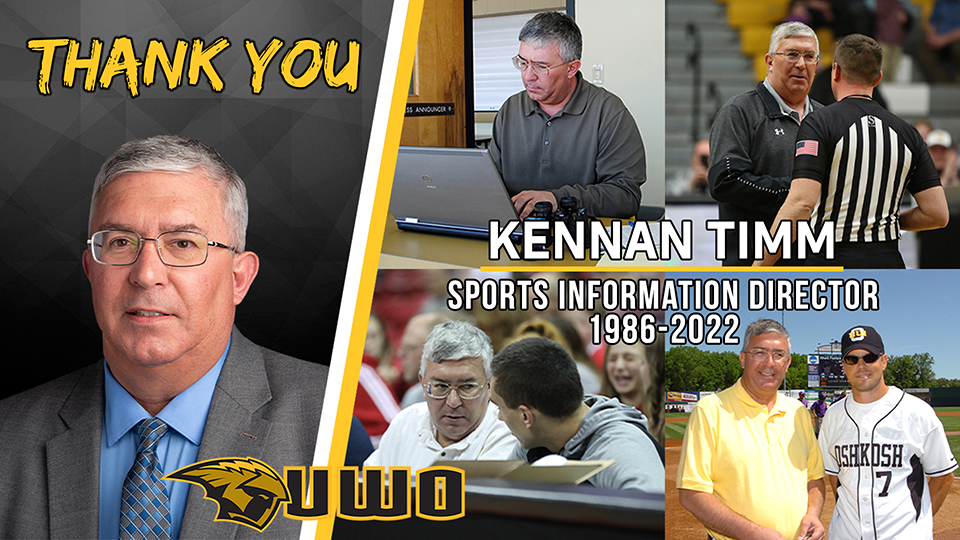 Kennan Timm, who has been the sports information director and human encyclopedia for University of Wisconsin Oshkosh Athletics the past 37 years, announced Thursday he is retiring, effective June 30.

Since arriving on the UW Oshkosh campus in August 1985, Timm has overseen publicizing one of the most successful athletics programs in NCAA Division III history. UWO has captured 35 national and 120 conference titles during Timm’s tenure.

“It’s truly been an honor to play a part, although small, in helping make the UWO Athletics program something special,” Timm said. “I’ve had a tremendous run in the sports information profession and been totally blessed to have had the opportunity to work alongside a fantastic group of administrators, coaches, support staff, student-athletes, community members and alumni throughout the years. My career brought me friendships, passion, laughter and opportunities, and memories that will last the remainder of my lifetime.”

Timm’s 40-year association with the Wisconsin Intercollegiate Athletic Conference from UWO and UW-La Crosse is one of the longest durations in league history.

“On behalf of the Wisconsin Intercollegiate Athletic Conference (WIAC), we are extremely appreciative of Kennan’s 40 years as sports information director with the conference,” WIAC Commissioner Danielle Harris said. “Serving three years at UW-La Crosse prior to his 37 at UWO is an accomplishment that puts him among the most recognizable faces in the history of our conference. His countless hours of providing publicity and service for the student-athletes, coaches and administrators were unmatched.”

In addition to coordinating publicity, keeping statistics, managing the website and producing publications for UWO’s 19-sport athletics program, Timm organized and chaired three major fundraising activities during his time at the University, including the Titan Extravaganza Party which raised nearly $300,000 for the athletics department from 1992-2019.

“Over the last 37 years, so many UW Oshkosh student-athletes and teams reached remarkable heights in competition and classrooms, and Kennan was there to amplify and chronicle their every achievement,” UWO Director of Athletics Darryl Sims said. “Kennan is a master of his craft and a true guardian of the UW Oshkosh Athletics story. He has been dedicated to his profession, performing his duties with precision, enthusiasm and kindness. And, today, he is celebrated by all of Titan Nation and his many peers. I share the gratitude of UW Oshkosh for his nearly four decades of outstanding service to our athletics department and this institution.”

Timm also served as the host media relations director for the finals of 31 Division III Championships as well as nearly 50 Division III regional tournaments. In 2007, Timm became the first sports information director in Division III history to host two different national championships during the same weekend when UWO hosted the finals for both baseball and men’s and women’s outdoor track & field. UWO and Timm also duplicated the task in 2008.

Following the retirement of UWO Director of Athletics Allen Ackerman in 2010, Timm became the local committee chair for the Division III Baseball Championship that was held at Fox Cities Stadium in Grand Chute from 2000-18.

“When you think of the consummate SID, Kennan is at the top of the class,” Ackerman said. “He was a tireless worker who always promoted the student-athletes and coaches to receive the utmost recognition. Kennan will be missed, but not forgotten, for all he has done at U Oshkosh. I congratulate him on a great job.”

Lynn King, the UW Oshkosh’s Director of Athletics from 1988-90 and who has since been at Division I Drake University (Iowa) and the University of Pacific (California), said, “Kennan is at the top of the list of SIDs that I’ve ever worked with.” He was “unstoppable,” recalled King. “He covered me, and the background information he provided made me look really good.” Two other traits that characterize Timm, King says, are his professionalism and his loyalty. “He cares deeply for the UW Oshkosh athletics program,” King said.

“I couldn’t work the hours each week without the support of my family,” Timm said. “My wife, Janis; daughter, Jennifer; and son, Cory; have all played a role during my tenure at UW Oshkosh and I can’t thank them enough for allowing me to follow my passion.

“I also want to thank UW Oshkosh assistant sports information director Ricky Nelson for his outstanding work the past six years and all the students who have worked under me, including the most recent in Becca Baier, Drew Litrenta, Nicole Seidl and my son, Cory.”

Timm, an Oshkosh West High School graduate, was a member of the wrestling media relations staff at the 1984 Summer Olympics in Los Angeles and worked as a radio/television spotter in the press box for Green Bay Packers preseason and regular season football games from 1993-97. Timm was the official statistician for the Wisconsin High School All-Star Football Classic at J. J. Keller Field at Titan Stadium from 1985-2021 and the official scorer the Wisconsin Interscholastic Athletic Association State Baseball Tournament in Appleton from 1998-2020.

“I want to thank the administration at UW Oshkosh for selecting me as its sports information director in 1985,” Timm said.

“My sincere appreciation goes to men’s athletics director Jim Flood, women’s athletics director Helen Briwa, and search committee chair Gary Coll for believing in me and providing me an opportunity that has lasted 37 years. I also want to thank current Athletics Director Darryl Sims and former Athletics Directors Lynn King, Russ Tiedemann, David Weidemann and Allen Ackerman for providing me an outstanding environment to work in.”

Timm, a 1990 graduate of UW-La Crosse, was inducted into the College Sports Information Directors of America Hall of Fame in 2012 and the UW Oshkosh Athletics Hall of Fame in 2021. He was also named the winner of CoSIDA’s prestigious Warren Berg Award in 2009.

“I came to UW Oshkosh nine years ago, and Kennan was the first person to speak to me on my interview and first to welcome me when I started my position,” UWO head baseball coach Kevin Tomasiewcz said. “He has always been a great asset to not only the baseball program but the entire UW Oshkosh Athletics Department. His attention to detail and passion for athletics is unmatched in his field.

“As a former player who participated in the baseball championship in 2004 and 2005, I cannot thank him enough for making my two appearances in Appleton some of the best baseball experiences of my life. Now as a colleague, I cannot thank him enough for his support and work within our athletics department. He undoubtedly leaves a legacy and standard that will be hard to match. To simply put it … Kennan Timm is a Titan!”