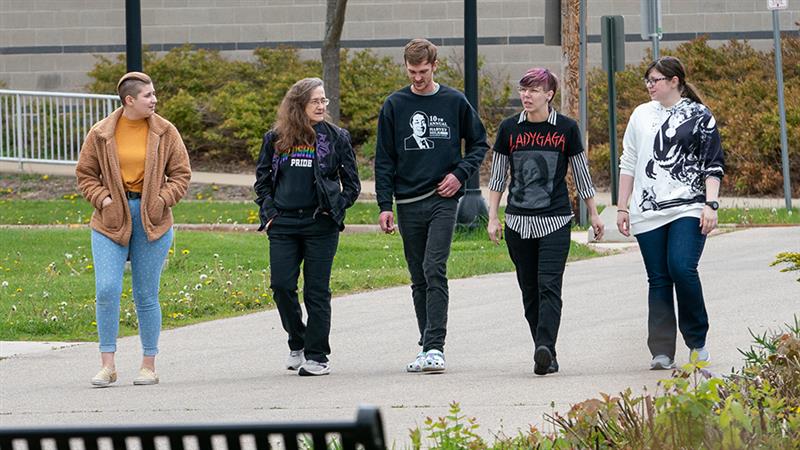 Liz Cannon’s work at the University of Wisconsin Oshkosh began without much fanfare in fall 1997. That semester, ey taught just one introduction to women’s studies class. 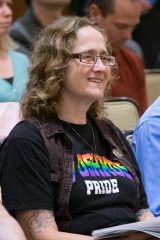 The next semester, Cannon took on a women’s studies senior seminar and a gay and lesbian literature class—the first LGBTQ course ever offered at UWO. In 1998, Cannon was hired to fill a full-time instructional academic staff position in the English department.

Year by year, class by class, Cannon built a career and a more inclusive campus climate at UW Oshkosh.

Ey served three stints as acting director of Women’s Studies. From 2003 to 2006, Cannon started and directed the Women’s Center. From 2009 to 2012, ey directed the Social Justice Program. Since the 2008 opening of the UWO’s LGBTQ+ Resource Center, ey has served as the director. Then in 2014, Cannon started the LGBTQ studies certificate, which ey has coordinated ever since.

After 25 years of teaching, mentoring and advocating at UWO, Cannon retires June 30. Here are eir reflections on a career well lived.

How would you describe the campus culture/climate when you first arrived?

I was pleasantly surprised. I was out from the beginning and was strongly supported by the English department. I also was asked to join the two ad hoc committees on campus that focused primarily on lesbian and gay needs: one that planned the Coming Out week programs and the other that coordinated SAFE trainings. The following year those two committees combined to form the GLBT Awareness Committee, which is now the LGBTQIA+ Education and Advocacy Council, and I was asked to be one of the two co-chairs. 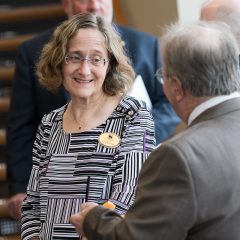 Cannon takes part in Opening Day activities at UWO in 2017.

From a student’s perspective, change was just beginning. There was an organization for students, Silent Legacy, and all you need to know is in the name. They were not University recognized. Two students in my gay and lesbian literature class decided it was time to form an Oshkosh Student Association recognized student organization, which suggested to me that the climate had changed enough for them to do so. They asked me to be the adviser of their new organization, H.O.P.E or Helping Others Perceive Equality.  Again, the name shows they were not ready to be completely out. They put the meetings on Monday nights from 9 to 10 p.m., wanting to make sure there would be no class conflicts, no programming conflicts and fewer work conflicts for students wanting to come. This was the only safe space completely for LGBTQ students on campus (which does not mean there were no individual faculty and staff members who were supporting LGBTQ students. There were!)

Only a few years later the group decided to change the name to Rainbow Alliance for H.O.P.E.  The discussion wasn’t about a more accepting climate but about wanting a name that other LGBTQ students would recognize. In the beginning years, most of the students who came to H.O.P.E. were gay, lesbian and allies; suggesting that trans students not only didn’t feel comfortable in the group but also didn’t feel safe on campus. My guess is that bi students mostly stayed hidden as the gay and lesbian communities in general were not welcoming to bi people. (I do think that started to change when I came out as bi rather than lesbian and added education about bisexuality to educational initiatives, in campus programming and in SAFE training.) 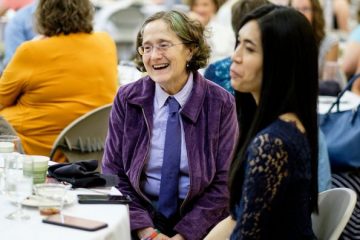 Cannon visits with Stevie Tran at the Harvey Milk Scholarship Dinner in 2017.

How have things changed on campus over your time at UWO?

I wish I could say microaggressions are a thing of the past. Campus climate, however, is going to follow the trends of aggressions in the nation. For example, the significant increase in bias incidents on campus during the 2006 elections when the marriage ban was voted into the Wisconsin constitution was the impetus to create an LGBTQ+ Resource Center at UWO.

Currently, with the language to speak of more genders and sexualities comes new forms of micro and macroaggressions. Nationally, transgender people have specifically come under attack with bills limiting restroom usage to cisgender people, targeting trans athletes and physicians who provide trans healthcare. In general, bills are being introduced to restrict public school teachers from teaching about sexual orientation or gender identity in kindergarten through third grade. Additionally, the violence against trans people, especially transgender women and transgender people of color, continues to increase. While our University’s stance is in opposition to these bills and this violence, they still affect climate on campus.

However, I have seen so much change for the good on this campus. I do honestly believe that SAFE trainings have made a significant difference to the climate on our campus. In my time here, I have seen the number of trainings increase from two to 36 per semester. While I know many are required to attend by their professor, department or division, so many on this campus see that education about the LGBTQIA+ community and how to ally with LGBTQIA+ students is crucial to working with all UWO students. There are so many more supportive students, staff, faculty and administrators on this campus than there were in 1997.

Since 1998 when gay and lesbian literature was the first course to focus completely on LGBTQ+ material, many faculty and instructional academic staff members have seen the importance of teaching this material. I did a survey in 2009 to identify courses that consistently included such content, taught at least two weeks of LGBTQ+ content, or at least taught some LGBTQ+ content, and the number of courses that included at least two weeks of content pleasantly surprised me. By 2013, we had enough courses with either consistent content or significant content to propose the LGBTQ Studies Certificate.

I still think too many people on campus associate LGBTQIA+ students with white students.  Since the resource center opened, we have focused our programming on intersections. With the hiring of Zayn Croft, the coordinator for racially and ethnically minoritized LGBTQ+ students, the institution has recognized the importance of serving an often invisible population. But we must remember it is the responsibility of all of us to serve all students in all their intersections and to never assume certain identities always intersect.

I have the Campus Climate Index Task Force to thank for other changes we’ve accomplished on this campus. Here are some of them:

You have been at the forefront of many efforts to support women and the LGBTQ community on campus, what are you most proud of?

I am especially proud of the LGBTQ+ Resource Center’s internship program because of the amazing students I have had the honor to work with and all that they have accomplished.

What are the top priorities/efforts that you hope UWO carries out in the future that would extend the legacy of your work here?

The amount of institutional support the center has had has been amazing. There is still a need for more financial support to help expand what so many people have helped me build in directions that I can’t even think of, but I know Maddie Wiles, the new interim director, and Zayn Croft will!

Here are some things I would like to see happen:

I cannot thank enough the number of people who have been on this journey with me. None of this would have happened without you!