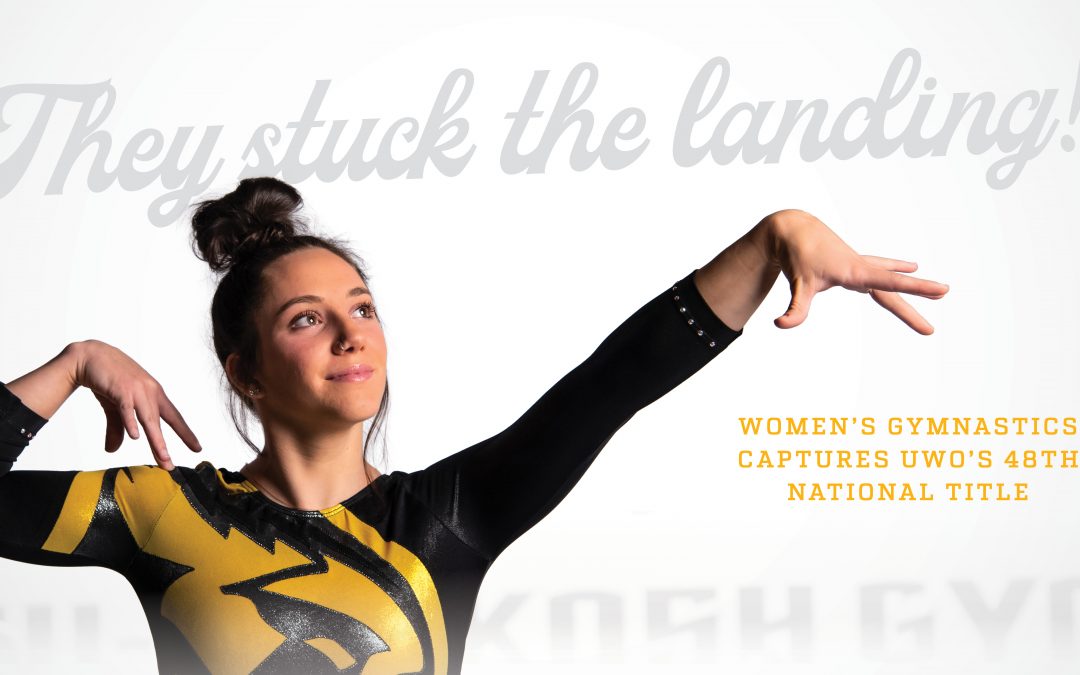 The afterglow of an undefeated season and national championship continues for the University of Wisconsin Oshkosh women’s gymnastics team.

“A national championship isn’t something that you get to experience often so I am incredibly grateful I had this amazing experience with this amazing team—they really are the epitome of what it means to be a champion through their hard work and dedication in the gym, in the classroom and in their high quality character,” said head coach Lauren Karnitz ’06 and ’12 MSE.

Beyond the team medals and trophy, a sparkling new “48” has been placed in Kolf Sports Center, signifying the 48th national title in UW Oshkosh history. It was the first for the gymnastics program since 2007 and its fifth since 1980.

The Titans had an undefeated season against Division III competition and a stellar, record-setting performance March 26 at the National Collegiate Gymnastics Association (NCGA) Championship in Ithaca, New York.

Emily Buffington, a sophomore journalism major from Huntersville, North Carolina, returned with an individual medal for her first-place finish on the uneven bars. Buffington was rock-solid all season and earned the title of Wisconsin Intercollegiate Athletic Conference 2022 Gymnast of the Year. 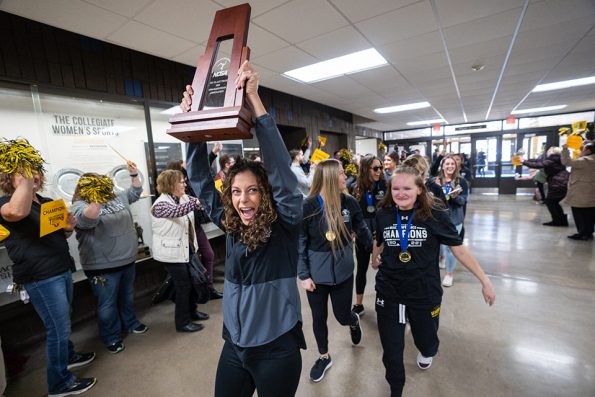 Chancellor Andy Leavitt said the gymnasts will remember the season and the national championship for the rest of their lives. He was incredibly proud the team boasted seven seniors named to the NCGA All-America In Academics Team—most in all of Division III.

Following a rousing celebration for the team’s arrival back to the Oshkosh campus, athletics director Darryl Sims reflected on the success of the gymnastics national championship.

“It never gets old,” he said, adding that the team is in elite company and that he “couldn’t be more proud.” Not many, he said, get to experience what the Titans did.

Karnitz said it will be tough to follow up on their undefeated record next season, but they will be up for the challenge.

“We are losing eight of our 24 starters, however we have a lot of talent returning and a lot of talent coming in so I believe we will just continue to be the hardest working team in the gym, day by day, and see if that’s good enough at the end of the season,” she said. “In the end someone has to win nationals, so why not have it be us? That’s what we will be working toward.”