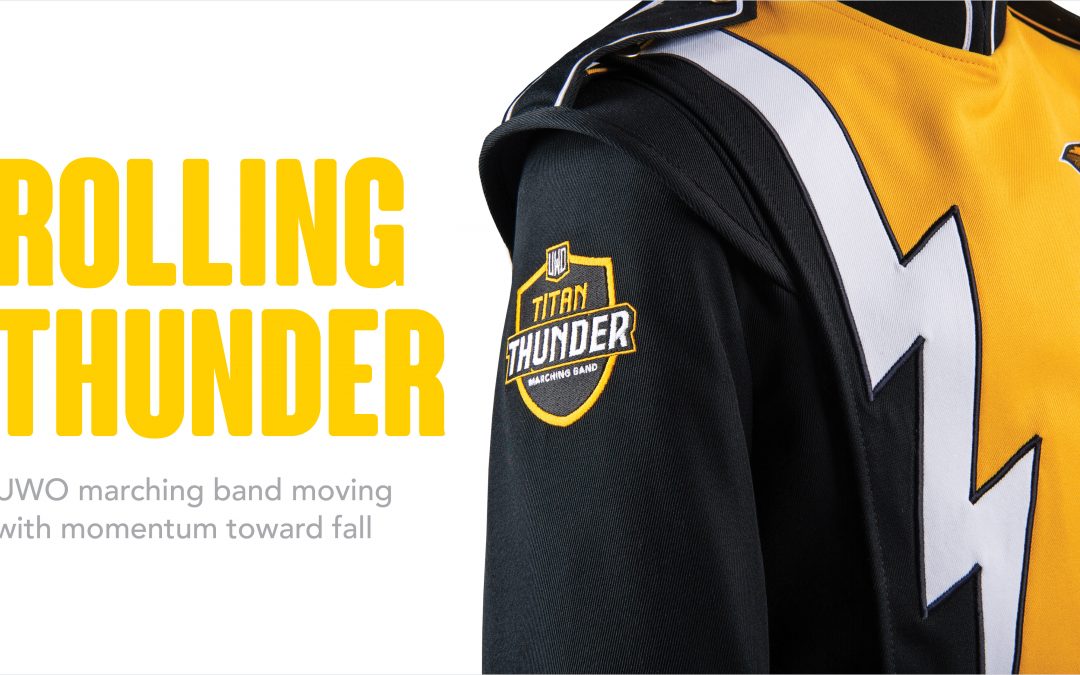 Without having played a public note, the University of Wisconsin Oshkosh is already feeling the reverberations of the Titan Thunder Marching Band.

The soon-to-be staple of Titan game days—in the works for more than a year—is expected to become a powerful recruiting tool. UW Oshkosh Chancellor Andy Leavitt has said a marching band has long been atop the list of most sought-after extracurriculars among prospective students and as the Titan Thunder’s inaugural year approaches, the benefits are apparent.

Take Elise Williams, for instance. The spring graduate of Southwest High School in Green Bay is headed to Oshkosh in the fall to study music education. Before learning about the Titan Thunder, she considered going to two other Wisconsin schools with marching bands but decided they were too far from home. It seemed, then, her best course would be to stay in her hometown and study nearby.

But before making a commitment, she did one last look for northeast Wisconsin schools with marching bands—and that’s when she found UWO.

Curious, she attended a virtual session with Joe Scheivert, director of athletic bands, to learn more about the opportunities available.

“I remember the first meeting I was sitting in. I didn’t know anyone because I was the only incoming freshman and everyone else knew each other, but I just felt like I belonged,” Williams said.

“They were asking me questions and having a great time—having fun while also giving the information on the marching band and I just felt like I belonged. And I thought, ‘This is what I want to do.'”

Helping seal the deal, Williams learned UWO has a strong education program. She now plans to live on campus beginning in the fall and be a part of the new color guard. She’s one of a few dozen students already with a spot penciled in with the Titan Thunder.

To say Scheivert has been busy since joining the University last June would be an understatement. Building a marching band program from the ground up is a colossal undertaking and the anticipation will only build as the summer progresses.

“There is certainly a lot of momentum heading into our first season,” Scheivert said. “Our orders for instruments, uniforms and equipment are coming in. Student leaders are discussing how to make it a memorable experience. And we’re in the critical phase of recruiting when first-year students are on campus for Titan Takeoff.” 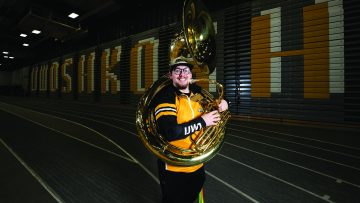 Beyond just recruiting students—whether still in high school, enrolled for a first time in the fall or already at UWO  Scheivert selected more than a dozen Titan Thunder members to be student leaders. The group includes Chandler Sumner-Gehrig, a senior music education major from Wauwatosa, who was named drum major.

The drum major serves as the leader and chief student liaison connecting the band’s members and staff, and will help with key components of the student experience, including preseason communication, band camp, social events, outreach and an annual banquet.

Sumner-Gehrig was drum major at Wauwatosa West High School and for two years he marched with the Colts Drum and Bugle Corps. This year he played sousaphone in the Bolt Band, the new pep band that played at home basketball games for the first time beginning in January.

“The spring brought so many fun activities and an entire new set of friends and relationships, and during our Bolt Band season we brought the school spirit to a whole other level,” he said. “We have been able to support many of the Titan teams. In the fall I hope to continue to support our school and our teams through fantastic seasons.”

Beyond the students taking on responsibilities, educators from both inside and outside the University were announced in the spring as part of Scheivert’s athletic bands staff. UWO’s Leigh-Ann Lethco, a music education lecturer, is assistant director of athletic bands; and Hakeem Davidson, a lecturer in the music department who teaches clarinet and music business, will serve as color guard instructor.

Benjamin Baertschy, currently a performer and arranger for the Green Bay Packers’s Tundraline, joined the Titan Thunder staff as percussion coordinator; and Whittney Seckar-Anderson, who teaches and is co-director at Julie’s Touch of Silver Dance Studio in Oshkosh, is the twirling instructor. Lisa Lewis, a 2008 graduate, is the administrative assistant.

The Titan Thunder’s big debut is Saturday, Sept. 3, when the Titans football team hosts East Texas Baptist University at J. J. Keller Field at Titan Stadium. The game also will be the first for the Titans under head coach Peter Jennings, who was hired in March.

Another key date is Aug. 19, when a first wave of students, including student leaders and members of the drumline and color guard, descend on Oshkosh for preseason band camp. The remaining students arrive Aug. 21 and the camp will run through Labor Day weekend.

“I’m really excited for band camp,” said Williams, who will move in on the Oshkosh campus at the end of August. “At my high school, band camp week is a lot of work in the sun, but it’s so much fun—just spending hours with these kids, learning new things, new routines and having a great time.”

Scheivert is inviting all members of the UWO community to take part in a special performance during Homecoming weekend. The Oct. 22 halftime show will be a celebration of 100 years of bands at the University and all faculty and staff, students and alumni are welcome to take the field with the Titan Thunder Marching Band. Consider it a tribute to the history—and future—of UWO bands.