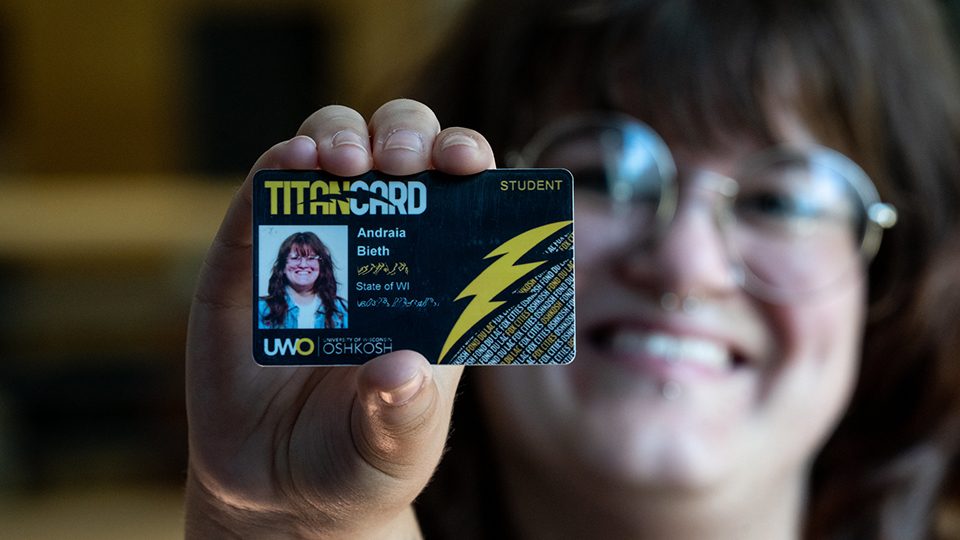 Andraia “Draia” Bieth said she was “over the moon” when she learned judges picked her design for an updated TitanCard that will be in the hands of University of Wisconsin Oshkosh students at its campuses in Fond du Lac, Fox Cities and Oshkosh.

The senior graphic design student said she still can’t wrap her head around the fact that so many people are going to be carrying something she designed in their wallets or on their lanyards. She said it definitely is one of the biggest accomplishments she’s had in her time as a student at UWO—something she said she’ll never forget.

Colin Wylie, who recently departed from his position as communications manager at Reeve Union, said the card is redesigned every 10-15 years but for this update, the redesign committee wanted student input in the process.

Shirin Skifstad, Titan Central manager and co-leader of the design committee with Jackie Connell-Chair who is the new student event manager at the Fox Cities campus, said the redesigned card needed to reflect the University’s updated lettermark “look” and needed to be inclusive of all three campuses. An 11-member committee, which included an art professor, University art director and several student representatives, collected data from all three campuses on what they felt the card should encompass. They also created surveys to allow for voting on designs and compiled information for campus leadership to review.

Skifstad said Bieth’s design incorporated the school colors of gold, black and white and listed all three campus names in a creative and visually appealing way.

“The survey, with over 800 responses, showed that the majority of our campus community preferred Andraia’s design,” Skifstad said.

Bieth, a graduate of New London High School, had experience creating promotional materials for campus events through her student job at Reeve Union. Wylie, who had been her supervisor, called her a “phenomenal” student-designer. 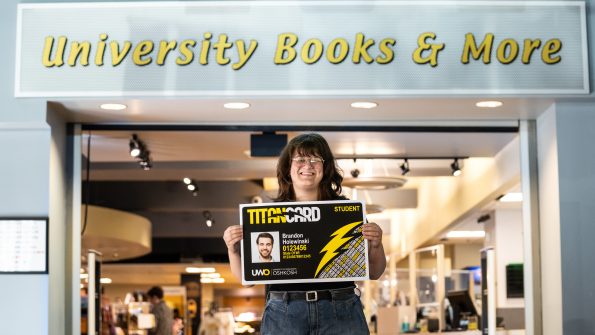 The culture and feel of UWO

“Something I wanted to accomplish with this design was to incorporate elements of the amazing TitanCard logo that we already have,” she said. “I ended up taking that lightning bolt you see in the middle of that (Titan) logo and tried different ways of implementing it in my design. Some of my other goals were to boldly use the UWO colors, including the names of each individual campus, but still keep the design clean and not too busy.”

All incoming students for the fall 2022 semester will receive the newly designed card, as well as new employees and anyone who needs a replacement. It is expected the old-design cards will be phased out over the next three to five years.

Bieth, who is entering her final year at UWO, said following graduation, she aspires to work as a graphic designer with a brand design firm or to create movie posters or album covers.