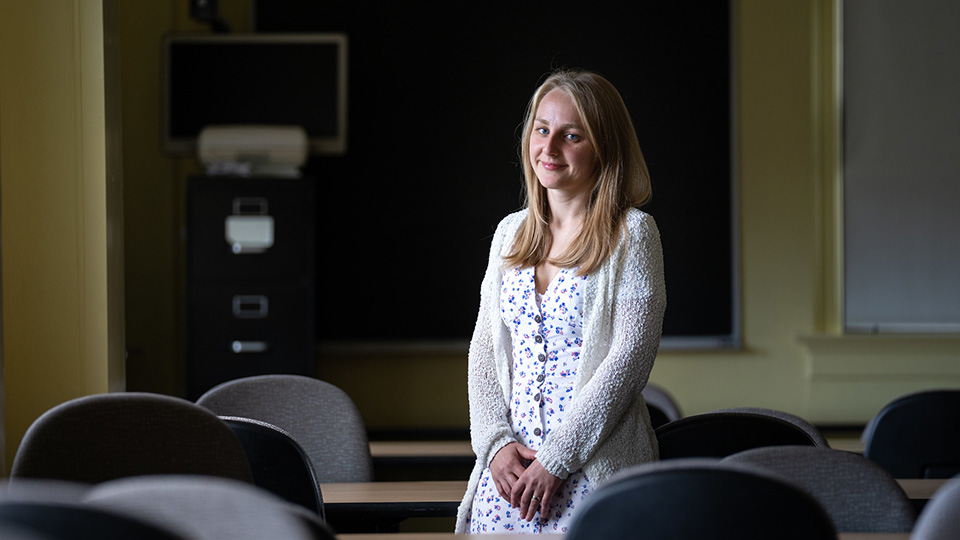 Oksana Katsanivska is one of several faculty and staff newcomers to the University of Wisconsin Oshkosh this fall. Katsanivska, who has joined UW Oshkosh as a lecturer in the anthropology, global religions and cultures, English and international studies departments, came to the United States this summer from Europe after fleeing her home in Iziaslav, Ukraine.

Katsanivska is teaching four courses this fall: Food Anthropology, Comparative Linguistics, Modern Ukrainian Literature, and Russo-Ukrainian Conflict. As the semester begins, we checked in to learn about her background, her experience living in a country under attack and how she went from fleeing her home country to teaching in Oshkosh.

How did you end up coming to work at UW Oshkosh of all places?

I’ve heard many great stories about UW Oshkosh while translating for Dr. Jordan Karsten during his archeological excavations in Verteba, Ukraine. Both him and his students described UWO as a perfect place for acquiring new knowledge and growing professionally. So, when the war broke out and Jordan suggested that I come to work at UW Oshkosh, I willingly agreed.

Can you fill us in a bit on your background—your education and career so far?

To start with, it’s my second time in the USA. In 2008-09 I studied at New Brockton High School in Alabama as a participant of the Future Leaders Exchange Program, organized by the American government. After coming back to Ukraine, I entered Chernivtsi National University and received both my bachelor’s and master’s degrees in philology there. After graduating in 2014 I decided I wanted to learn another foreign language while helping other people somehow. So, I became a European Service Volunteer, went to Italy and worked at the youth center and kindergarten there for one year. In 2016 I came back home and started working as a freelance translator of nonfiction books and a private tutor of English language.

How did your life change when Ukraine was invaded in February?

Drastically is the word.

On the morning of Feb. 24 all Ukrainians woke up in the new reality … and not a good one. My husband had gone abroad just two days before the war started. My son was 33 months old at that moment and my daughter was only 10 months old, and I remember constantly feeling scared for them. I would not wish anyone to experience that feeling.

Luckily my native town was far from the front line of fighting, but massive bombings made it impossible to feel completely safe anywhere in the country. So, at the beginning of March I decided to take my kids and flee. Leaving home wasn’t an easy decision to make. I love traveling but this is not traveling. It’s leaving behind your whole life, your family, your friends, your house, and your pets. It’s fleeing your country with one stroller, one suitcase and one backpack for the three of you. My son crossed the border, carrying his own tiny backpack filled with cars and books. It was heartbreaking to watch.

What have the months since been like for you and your family?

We reunited with my husband, who had come to the Hungarian border to pick us up, and went to Sardinia. We were lucky enough to have friends, who supported us and helped us settle in there. These past months went by extremely fast and extremely slow at the same time. They consisted of news reports, phone calls and texts from the family and feeling worried for everyone back in Ukraine.

My husband and I were trying (and we still are) to make these changes the least traumatic for our kids. But they do miss their home, their grandparents and their friends. We do, too.

How does it feel to now be in Oshkosh and hopefully settled in?

We honestly love it here! Oshkosh seems to be a wonderful city. And people are just amazing! We were deeply touched by everyone’s friendliness and willingness to help. And we are eternally grateful for everything that the University community has done for us.

What are you most excited for in the new school year?

I am most excited about meeting my students, helping them learn something new and learning something from them. Judging from my experience, students sometimes can be great teachers themselves. Actually, that’s the reason I love this job.