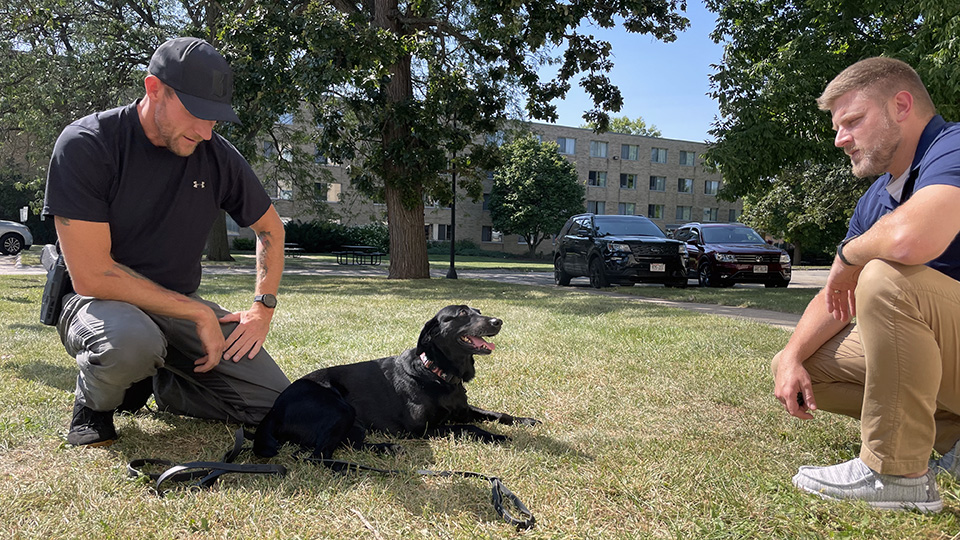 After more than four years and hundreds of deployments, a popular member of the University of Wisconsin Oshkosh Police Department has moved on to another agency.

Skylar, the detection dog sworn in as a member of UW Oshkosh police in late 2018, is joining the Winnebago County Sheriff’s Department.

The move comes after the K-9’s most recent police department handler opted to leave law enforcement. Chris Tarmann, acting police chief at UWO, said the small University force is without any other officers with the training or capacity to take on such a role, and the sheriff’s department was interested in acquiring a detection dog.

“Winnebago County has many more resources, they have several handlers who have really strong experience doing stuff like this, and ultimately it’s way easier for their program to turn around and pick up a dog who is very strong in her skills and keep the program running,” Tarmann said. 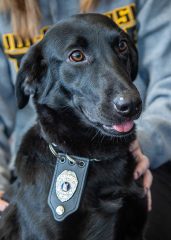 Skylar is trained to sniff out explosives, track individuals and find evidence at crime scenes. She also can help provide a sense of calmness and deescalate certain types of stressful situations.

The 5-year-old lab will still be a frequent visitor to the Oshkosh campus, as the sheriff’s department will continue to use her for sweeps for major University events. She’ll also continue to do sweeps at the Oshkosh Arena before Wisconsin Herd games, as she’s done the last several years.

Skylar’s new handler is Bob Zill, a patrol deputy with past experience with a police dog. Zill, who also owns a pet pug, came to campus Friday afternoon to pick up Skylar. He was very much looking forward to bringing her home.

“I’ve always been an animal lover,” Zill said. “I’m very excited about it.”

In her time at UWO, Skylar had nearly 50 official deployments, most of which were sweeps before large events on and off campus. Tarmann said she also went on many wellness checks and generally was helpful for proactive community policing.

“She would go on calls for mental health checks,” he said. “People feel better with a dog. Even though I don’t have data, she did hundreds of those—where she was having positive contacts with the community that let us grow relationships organically with community members.”

The county also plans to continue the detection dog program, Tarmann said, beyond Skylar’s career. So the UWO police can take pride in the fact that something they started back in 2018 and have now bridged to the sheriff’s department will keep on going.

And even though Skylar won’t be a constant presence at the Oshkosh campus, she’ll still be serving in the greater community—and will be back from time to time.