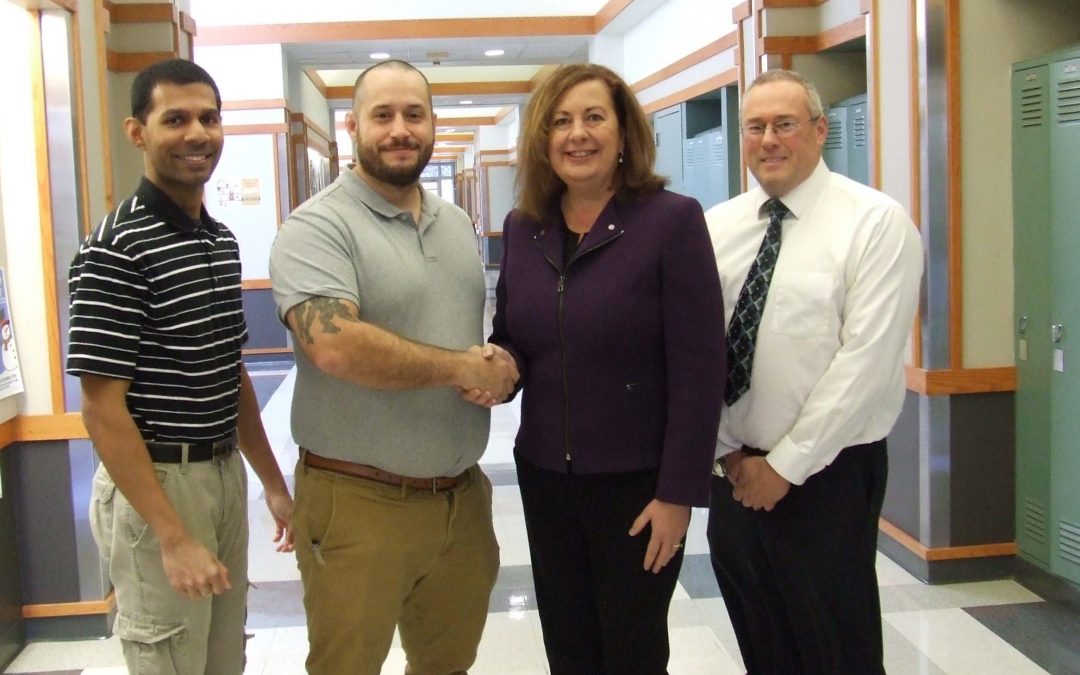 A University of Wisconsin Oshkosh, Fox Cities campus student won his own Super Bowl at Lambeau Field, when he was named No. 1 overall draft pick at the Northeast Wisconsin Manufacturing Alliance’s recent Internship Draft Day.

Samuel Dick, of Oshkosh, is a sophomore majoring in mechanical engineering. He joined more than 150 college students who were showing off interview skills as they vied for internships with area firms. Points were awarded not only on interview skills, but academic standing and extracurricular involvement, with bonus points earns for anyone awarded a company’s Most Valuable Interview.

Dick said he felt great about winning—he topped students from all around Wisconsin and northern Michigan—but said he was surprised to hear the news. He took home $1,500 in scholarship money and not surprising, nailed down multiple offers on an internship.

“Honestly, I was so focused on the interviews that I had no idea that I had won until someone emailed me about it several days later,” he said. “The idea of a scholarship (was) a nice bonus, but I really went to the event to interview and to secure an internship for next summer.”

Warren Vaz, associate engineering professor at the Fox Cities campus, said being named top overall draft pick against students from so many large campuses (including UW-Madison and UW-Milwaukee) is a “big achievement.” He believed it was just the second time ever an access campus student has beat out all competitors.

Dick said he was extremely prepared going into the Draft Day event. There was a chance to take part in up to six interviews and networking sessions with more than 50 companies.

He reviewed all the employers and scheduled the maximum number of interviews that he could. He researched the companies and ranked them by his interest in them. He noted company culture, what they make/do and their history as he prepared questions.

“I feel like having good questions to ask a potential employer is one of the most important things you can do as an interview candidate,” he said. “They show an employer that you did your homework, that you are interested in their company and shows them what matters to you … in addition to whatever information the actual answer reveals. Interviews should always be a conversation and it is always my intent to interview the employer as much as they are interviewing me.”

Dick, who grew up in Lexington, Kentucky, has made a final choice on his summer internship and plans to work for Nercon, a conveyer manufacturer with a design office in Neenah and a manufacturing facility in Oconto. His future plans are to obtain a bachelor’s degree in mechanical engineering and work in industry, preferably in automation and controls. Dick wants to specialize in design engineering in the automation space when he graduates and he believes the Nercon internship will help him towards that career.