A leader at the University of Wisconsin Oshkosh recently began a two-year term on the Association for College Unions International (ACUI) Board of Trustees. 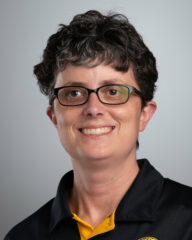 Missy Burgess, associate director for student involvement at UWO, said in a statement of candidacy that the world has changed dramatically in the last nearly three years and ACUI has the opportunity to be a thought leader on the “new normal” and to stay relevant for its membership.

“It is an honor to be selected by my peers to represent our members at this level,” Burgess said. “I am excited for the challenge and opportunity to shape our strategic future.”

Burgess said conversations of diversity and inclusion are pressing matters for the world as well as ACUI and leaders will need to look internally to make sure policies and practices create an association that is welcoming to all. Ongoing educational opportunities for members will be part of the conversation.

As a board member, Burgess will actively engage with ACUI strategies, finances and governance to further enhance the community and lead the future of ACUI and the college union field.

UWO is one of 450 institutional ACUI members from around the United States and abroad.

Burgess, who has been at UWO since October 2013,  earned a bachelor’s degree in chemistry from Southern Illinois University Edwardsville, a master’s degree in college student personnel from Kansas State University, and a doctor of philosophy in educational leadership from the University of North Dakota.