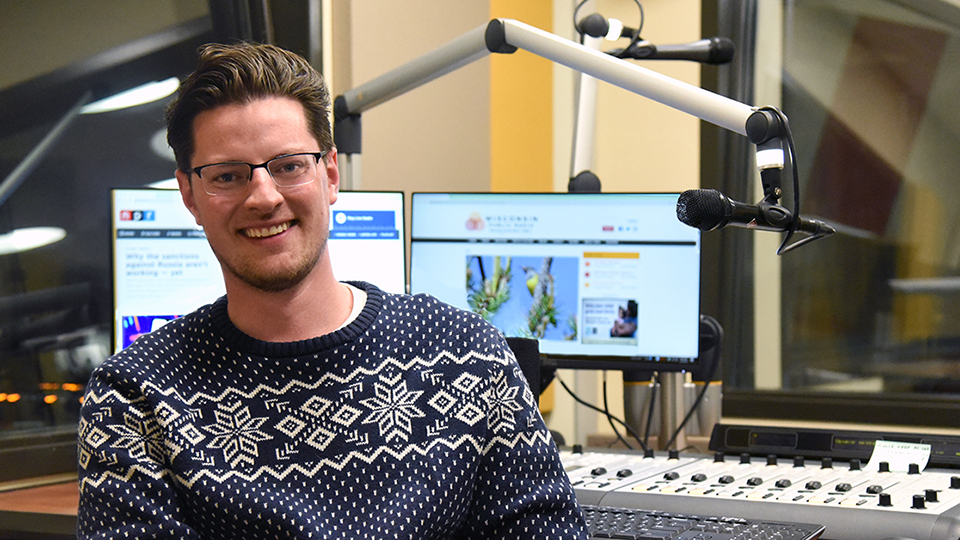 A broadcast journalist who got his start on the WRST-FM airwaves is now a daily fixture on Wisconsin Public Radio.

Alex Crowe, a 2015 graduate of the University of Wisconsin Oshkosh’s radio TV film (RTF) program, recently became WPR’s host of NPR’s Morning Edition. The show runs from 5 to 9 a.m. weekdays, blending the national broadcast with stories and features from the WPR team.

“I grew up listening to Morning Edition on my way to school. It’s a program I’ve always loved,” said the Racine native. “After having the opportunity to run a public radio station, WRST, in college, I had always thought in the back of my head it would be fun to go back to public radio because that’s where I fell in love with radio, that’s where I decided this was what I wanted to do so it really just becomes a full-circle moment for me.”

After high school, Crowe chose UW Oshkosh not because of its acclaimed RTF program, but to continue his swimming career with the Titans. In fact when he first came to Oshkosh he wasn’t sure what he’d study. His aunt, Cheri Preston, is an award-winning radio news anchor and correspondent for ABC News, so he’d thought about journalism. On his first day of classes, he stopped by the WRST table during Taste of Oshkosh—the annual opening week event now known as Titan Fest—and expressed interest in getting involved. This, a seasoned storyteller like Crowe would say, was an inciting incident—one that would kick off a media career entering a second decade.

He started with play-by-play for Titan athletics and as a program host. Through his RTF classes and at the station, he soaked up everything he could. By his junior year he’d been selected as station manager, a big responsibility that includes training the newer employees and always being on call. For his senior year, he served as program director—a step below his previous job, but still one that kept him in the mix with day-to-day operations.

“It was essentially running the station and helping to train other fellow students for about two years,” he said. “That’s when I decided this was something I wanted to do full time.”

He interned at WTMJ-AM his junior year and later worked evenings at WOSH-AM, piling up experience. By graduation, he’d also piled up a number of awards, including several first-place honors from the Midwest Broadcast Journalists Association and the Milwaukee Press Club.

Crowe credited Randall Davidson, the now-retired senior lecturer and director of radio services, as a major reason he got involved in radio and continued to explore all aspects of it. “I honestly would not be working where I am today with out him,” Crowe said. 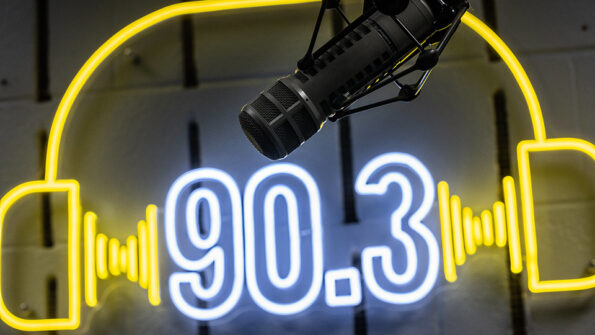 Set up for success

After graduation, Crowe made a move familiar to those in journalism: He went to a place light on population but with an opportunity for more experience.

The job was in Sisseton, South Dakota—a gig first described to him as “kind of middle of nowhere, but it’s a job and it’s full time and you get to run two radio stations by yourself”—working as the chief operator. That included creating and producing all on-air content, including a morning news show, and other managerial duties.

“It was the hands-on experience, getting to run the radio station day-to-day, working so close with Randall Davidson that really prepared me for when I graduated to be able to move out to South Dakota and take the keys, quite literally, to these two radio stations,” he said. “I had to maintain their public files, I had to communicate with the FCC—all these things that Randall had worked on with me very closely and things that I would not have known how to do if I were not at a school like Oshkosh and able to be as hands-on in a program like RTF.”

After about a year and a half he returned to Wisconsin to work as news director (and later program director) and on-air coordinator for WMDC-FM in Fond du Lac. He was again hosting the weekday morning show and in 2017 earned a Best Significant Community Impact award from the Wisconsin Broadcasters Association. By 2021, he’d returned to WTMJ, and worked there as a reporter, producer, creator and host of a weekly news magazine-style show until jumping to his new role in December.

Straight from the source

Crowe joins the WPR team that’s long linked to UWO. Before coming to Oshkosh, Davidson spent 18 years there as a news producer and afternoon newscaster. At the top of the WPR org chart sits Tom Luljak, a 1973 RTF and speech education graduate, who was named interim director in October. And not long before Crowe came on, 2021 RTF grad Joe Schulz was introduced as a reporter covering northeast Wisconsin news and statewide business, labor and economic issues.

With experience on the streets and in the studio, and both at the mic and running things behind the scenes, Crowe said he’s happy where he is at Morning Edition—feeding the day’s news to Wisconsin, maybe with their breakfast and morning commute.

“People are always going to be looking for news when there is a major headline or something but I like being the person day in and day out that people can go to and can ask what’s happening,” he said. “That’s something I take very personally and I really enjoy the opportunity to be able to play that role in people’s lives.”