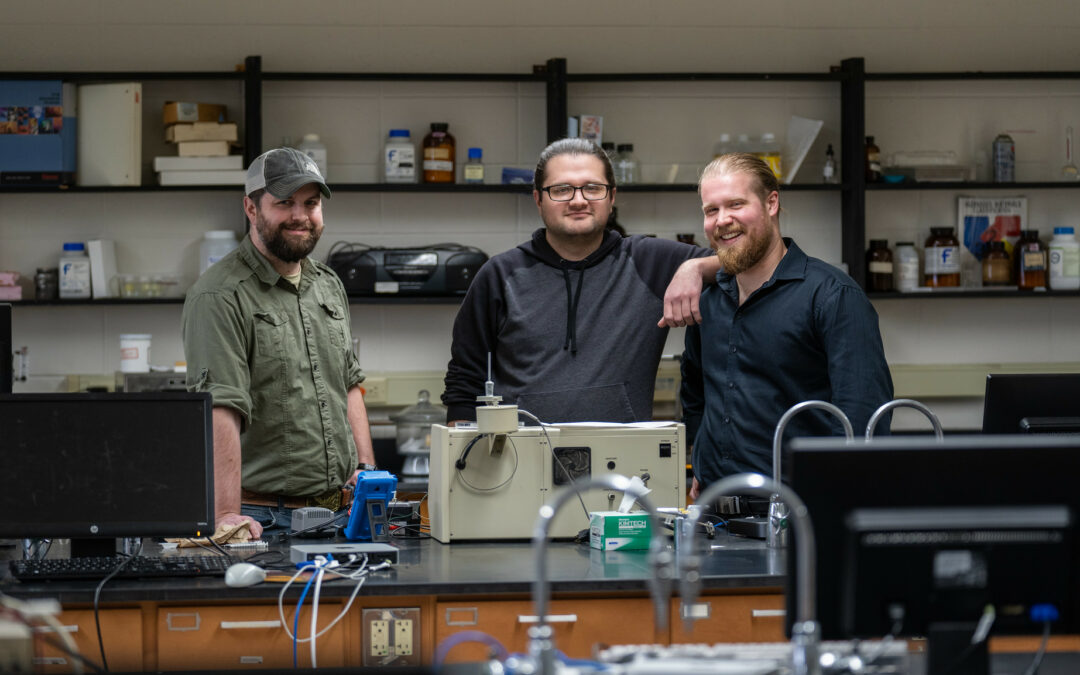 Chemistry majors Chris Rabe (left to right), Ethan Groshens and Thomas Cisler all found success at UW Oshkosh after transferring from other institutions.

Turns out there’s not just one formula for finding success as a chemistry major at the University of Wisconsin Oshkosh.

Four seniors in Jennifer Mihalick’s fall 2022 upper-level physical chemistry class took meandering paths toward earning a degree in arguably one of the toughest fields of study.

“I always have nontraditional students, but it was unusual to have so many all at once,” Mihalick said.

The four—who she noted all did “very well” in her class—included Thomas Cisler, of Appleton; Ethan Groshens, of Kaukauna; Christopher Rabe, of Fond du Lac; and Blake Schroeder, of Oshkosh.

While their higher educational journeys didn’t all start immediately after high school and most of them didn’t intend to major in chemistry at the start, they all ended up transferring to the Oshkosh campus from other institutions.

Groshens and Schroeder graduated in December, while Cisler and Rabe are on track to earn degrees in May.

Before landing on the Oshkosh campus, Groshens had several jobs in the manufacturing industry and had taken some courses at UWO’s Fox Cities campus. As part of the McNair Scholars Program at UWO, he worked in the lab with faculty mentor Brant Kedrowski on a polymer chemistry research project. He now plans to head to graduate school to earn a doctorate in chemistry.

Schroeder’s interest in chemistry began while taking classes at a Wisconsin technical college. He then transferred to UWO, where he worked as an assistant in a chemistry lab. Last summer he started a full-time job using his analytical chemistry skills on the night shift while finishing up his coursework this fall. 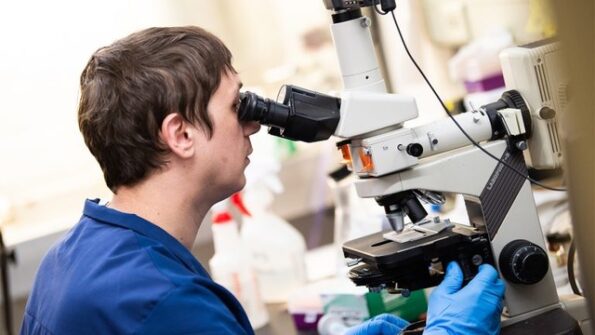 The goal is in sight

Rabe’s road to a chemistry degree is especially long and winding. It began 15 years ago when he started at Neosho County Community College in Chanute, Kansas, where he earned an associate degree in social science with the goal of becoming a lawyer.

But he soon lost interest in further studies and joined the U.S. Army, serving a four-year stint on active duty. Upon getting married and having a son, he decided to return to school because he wanted something better for his life. For two years, he worked toward a forensic chemistry degree at Missouri Western State University.

Then plans got waylaid again as he went through a divorce and dealt with financial issues. “My world had been turned upside down at that point,” Rabe said.

Four years ago, he moved in with his father in Kiel and began working at Rockline Industries in Sheboygan and whittling down his debt.

By August 2021, he was ready to give college another try.

“I chose UW Oshkosh at the recommendation of several of my coworkers,” Rabe said. “Failure this time around was not an option for me. The atmosphere here at UWO, especially in the chemistry department, is an amazing fit for me.”

Meanwhile, Cisler did get started on his college education right after high school but had trouble settling on a major and later dropped out of UW-Milwaukee.

“My original plan for college was frankly pretty simple; try to have fun and see what I can learn about myself,” he said. “I ended up dropping out for a couple of reasons. I certainly wasn’t very motivated to be there, I had failed physics and was starting to suffer from the imposter syndrome that a lot of young men deal with. I also felt like I had a lot left to learn about myself and life in general.”

Cisler turned to his passion for culinary work for several years before the pandemic hit and employment became “dicey.”

“I swallowed my pride, moved back home with the parents in Appleton, and decided I wanted to finish my degree. They both graduated from UWO so that’s where they encouraged me to attend, plus the commute is very tolerable,” he said.

A catalyst for the future

Having found success at UWO, Cisler is ready now for what’s to come following commencement in May.

“I have very little tying me down, so I plan on seeking opportunities all over the nation, and I’m trying to remain open to any and all opportunities,” he said.

Rabe said his UWO chemistry degree is the key to his future.

“This degree is everything to me. My goals after getting my degree are to pursue my life’s passion and work in a drug identification unit at a crime lab,” he said.

“This fast-paced, interesting, degree requires more time than other degrees because of the level of knowledge and the high standards of the UWO chemistry department; however, the opportunities that it opens up are boundless.”

UWO offers American Chemical Society-certified bachelor’s degrees in chemistry and biochemistry, as well as chemistry with an emphasis in biomolecular science (for those interested in medical fields), and chemistry–secondary education.