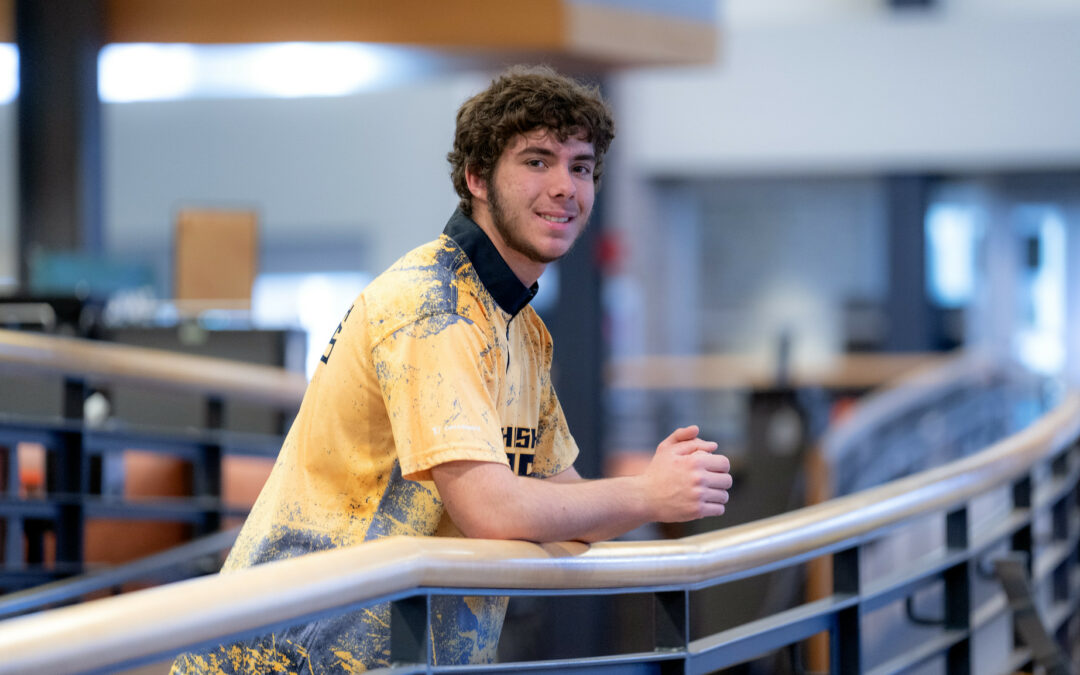 Zach Cornell found all he needed and then some at his hometown University.

While part of the Oshkosh West High School class of 2022, he explored his options for college around the state, but found the opportunities presented at UW Oshkosh—and the ability to live with his parents to save money—made it the right fit.

Now with one semester in the books, he’s settled into a number of different campus communities and finding success.

What’s helped keep him engaged? He’s one of 117 first-year students in the UWO Honors College, which gives the University’s most qualified and motivated students a unique learning community and is designed to challenge them to be critical thinkers, problem solvers and community leaders.

“It’s nice having the smaller class sizes,” Cornell said of his first semester Honors College experience, “and the professors are super awesome.”

A former high school multi-sport athlete, he’s also turned some of his past extracurriculars into activities that quickly enmeshed him in the college experience. He was part of the first-ever group of students to play in the new Titan Thunder Marching Band, which launched in the fall, and he’s also one of nine students on the men’s bowling club team. That team is working its way through the season that began in September and wraps in the spring.

The marching band came together for a first time for band camp in August, before playing a handful of football games in late summer and fall. Cornell, who plays tenor drums, said rehearsals are one of the best parts of his day. The band caught his attention when Joe Scheivert, UWO’s director of athletic bands, made a recruiting visit to Oshkosh West. Cornell said he seemed like a “really cool guy” and opted in to the program.

“Joining marching band is one of the best ways to transition to life as a college student,” said Scheivert, who joined UWO last year to launch the Titan Thunder program. “Students meet dozens of peers of all class standings and majors and make friends who have common interests before ever stepping foot in the classroom.” 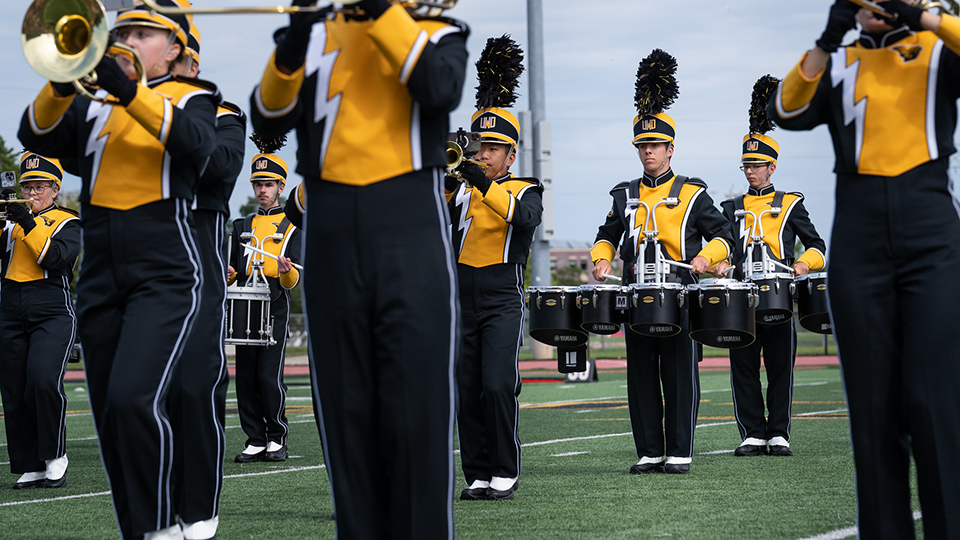 Zach Cornell plays tenor drums in the Titan Thunder Marching Band, which had its inaugural season in 2022.

The bowling club is another key piece to Cornell’s college experience. He said being on the team is “awesome” and it’s one of reasons he landed at UWO.

“The team’s just really supportive,” he said. “It’s like half upper class, half new guys, which is interesting because the guys that have been here have seen this team go from last year, where the team was only five people, to now.”

The nine-member team has nearly doubled in size and in October won a tournament for the first time in the club’s history. Matt Steffen, a sophomore radio TV film major from Sheboygan, leads the bowling club and said Cornell is a positive presence to have on the squad.

“Zach is a great teammate to have,” Steffen said. “He always finds a way to try to keep the team smiling when we are struggling, which helps a lot when tournaments get tough.”

Beyond the supportive communities he’s found, Cornell has secured another important bit of help: scholarships. He has received both the Pagelow Family Scholarship, awarded to a high-achieving first-year Honors student, and the Titans Promise Incoming Freshman Scholarship, which gives a boost to first-year students based on their high school GPA, financial needs and community involvement. The members of the Titan Thunder Marching Band also score a scholarship designed to offset the costs of participation and acknowledge the students’ efforts in service to the school.

Cornell was able to kickstart his college education with the Cooperative Academic Partnership Program (CAPP), which provides high school students an opportunity to earn high school and college credits at the same time. His CAPP work while at Oshkosh West meant by the time he came to campus for the fall semester, he had more than 30 credits. In fact, credit-wise he was already at sophomore status.

When not working on academics, at the bowling alley or playing drums, Cornell might be found working at one of two Subway locations in Oshkosh. He’s also a regular at the Student Rec and Wellness Center.

As a first-year student, Cornell still has time to plot out the next few years and where his education will take him. He opted for computer science major at the start and said working in a large commercial computing setting is where he thinks he could someday thrive.

“So many fields need someone to understand what problems they’re having and if they can be solved with computing solutions,” he said. “I feel like I can be one of those guys.”