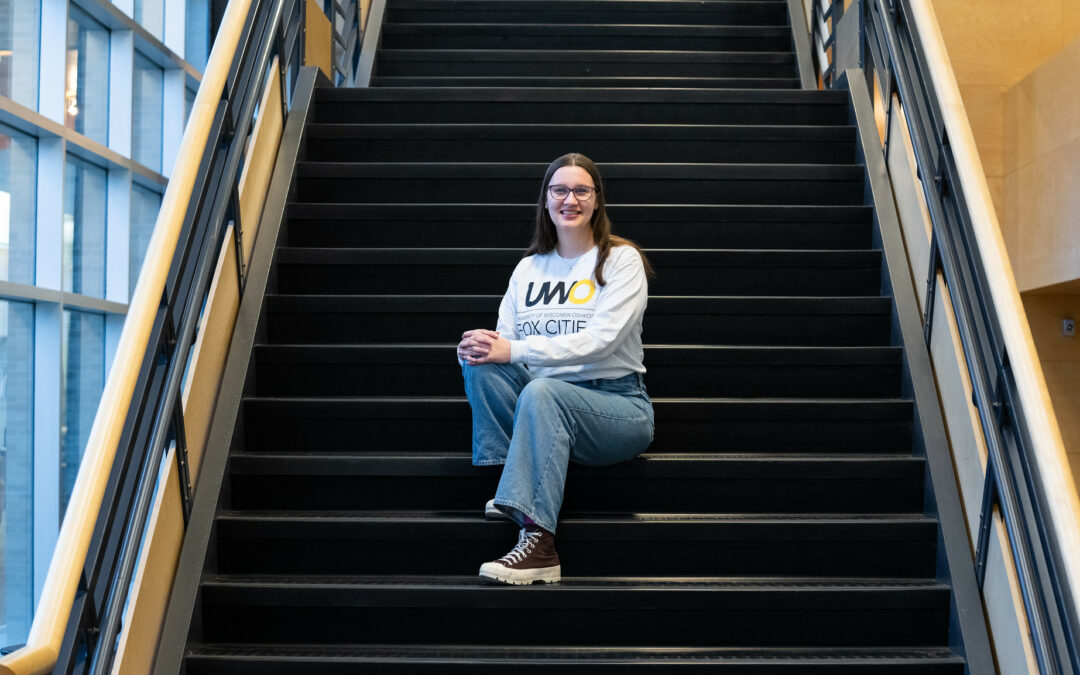 Hannah Nolte says her time at the University of Wisconsin Oshkosh, Fox Cities campus prepared her for the magical future she’s always dreamed of.

Nolte soon will be heading from her Appleton home to sunny Florida—she was accepted into the coveted Disney College Program. In late February she’ll be assigned a position as a paid intern, which has the potential to lead to a permanent opportunity.

Explaining she is a “people-person who likes to solve problems,” Nolte said her top assignment at Walt Disney World will to be to work as a concierge, in charge of the entrance at one of the resorts. She said she also would be happy being assigned as a cast member, character assistant or at a hotel, theme park or gift shop—“nearly any single job down there.”

Nolte wrapped up her studies and graduated in December with an associate degree. She even found time in her last semester to take part in a campus theatre production.

“I really enjoyed my time at Fox Cities,” she said, noting that she was attracted to the affordability and her ability to live at home. The smaller setting at UWO Fox Cities allowed her to be involved in many activities and get to know her professors.

Indeed, she was involved across campus. Nolte served as a new student orientation leader—guiding tours, taking part in panel discussions and answering questions, such as where to find tutoring or the union.

“I know where everything is on campus,” she said, adding that she recognizes the importance of students being familiar with their campus and all it affords.

Nolte said she took almost every art class offered and joined the Art Club. She was a student assistant at The Intersection, staffing the inclusive and welcoming space and collaborating on events like the Wellness Fair or creating displays for Black History Month.

Nolte credits Susan Rabideau, professor of communications and theatre arts, with her success. “I couldn’t have done it without her guiding me,” Nolte said.

Rabideau encouraged Nolte to move outside her comfort zone this fall—Nolte typically would be a stage worker—to consider a part in the play Unnecessary Farce.

Nolte said the November performances went great, and she will always treasure her time on stage playing Billie, a female cop.

Rabideau had a lot of praise for Nolte, a student she said has “flourished” on the Fox Cities campus.

“She is the kind of student you dream of,” she said. “She is dedicated, kind, smart and a leader in all things. Her work on campus has been amazing as a peer mentor, performer, costume designer, a logo creator, Art Club leader and an ambassador within The Intersection.”

Rabideau knows the Disney College Program has been a lifelong dream for Nolte, and she said Disney is lucky to enroll such an amazing student.

“I will miss her dedication and can-do attitude as she spreads her wings at Disney,” Rabideau said. 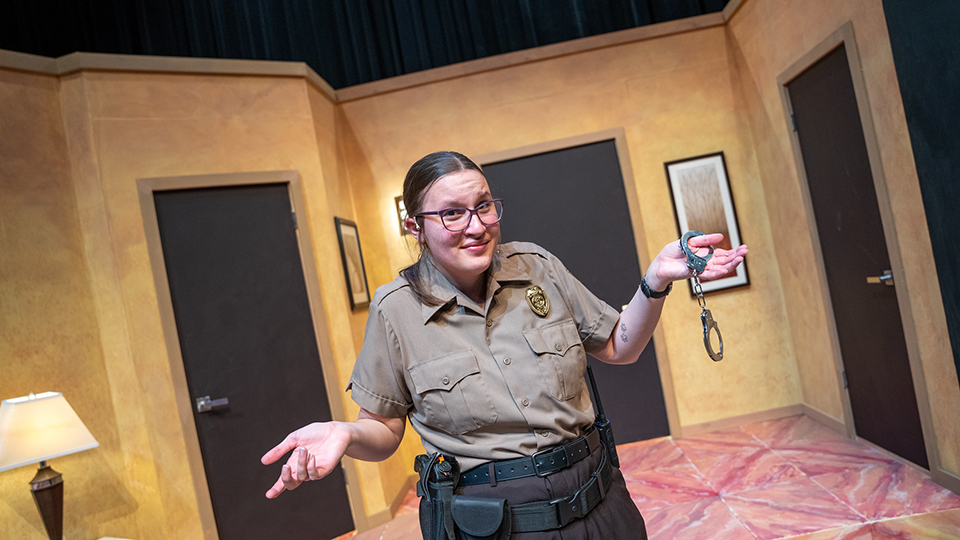 Hannah Nolte in the fall production of Unnecessary Farce.

The Disney College Program is something Nolte’s known about her whole life—her aunt, Rachel Nolte of Elkhorn, had the same opportunity nearly 20 years ago.

“Hannah will excel at the Disney internship because she is so friendly,” Rachel predicted. “Whether interacting with the park guests or meeting new cast members, she is easy to get along with, and she is a positive person to be around.”

She added the friendships her niece will make and experiences she’ll have will last a lifetime.

Another aunt, Jaimie Carlson, who is Rachel’s sister, has had a hand in teaching her niece about the travel and hospitality industries. Nolte has been interning with Carlson at her job at American Classic Tours in Manitowoc.

“I am a tour designer and she has been learning the ropes of designing and executing tours,” Carlson said. “Her behind-the-scenes activities include building timelines and passenger itineraries for our five to 12-day tours around the U.S. and Canada.”

Carlson said the internship is a great fit because Nolte is very organized, loves to learn and loves to travel.

“She’ll even be able to see a finished product when she comes with me in February while I’m leading the Hawaii tour,” Carlson said of the trip before her niece departs for Orlando.

Nolte will be a great fit for the Disney program, Carlson said, since she loves all things Disney, has great customer service skills and is excited to share her ideas on making a magical experience.

“When you’re talking about something you love, it doesn’t feel like work at all,” Carlson said.