‘Playing for each other’: Depth and trust helped UWO volleyball soar in ’22 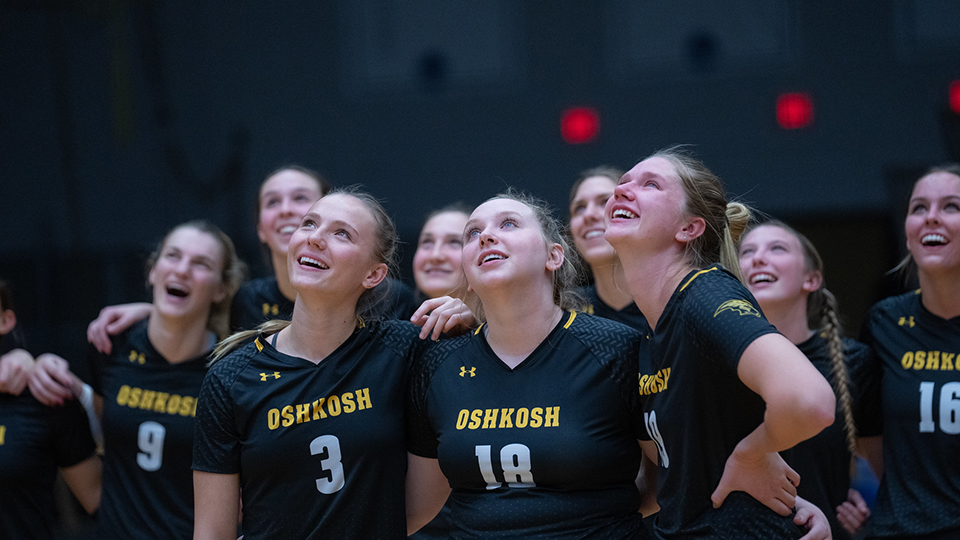 Somewhere in the woods of Green Lake, the University of Wisconsin Oshkosh women’s volleyball team laid the foundation for one of the program’s most successful seasons in years.

The 2022 campaign that included a 19-game regular season win streak and the first NCAA tournament victory in 13 years began, in a sense, with the Titans heading out on a three-day getaway in late summer, shortly after tryouts. Sixth-year head coach Jon Ellmann ’12 and ’14 MSE, and his staff, took the group on the rural retreat in hopes the 21 student-athletes—11 of them freshmen—would not just get to know each other, but connect in ways that would carry over onto the court.

The experience included team-building exercises, intense workouts and a lot of down time for the players to get to know each other. They watched scary movies, played games, shared stories and worked out with professional trainers who emphasize leadership and trust. And, maybe most importantly, they surrendered their phones at the outset.

“We had 11 incoming freshman and 10 returners—that’s not common in a recruiting class,” Ellmann said. “A lot of energy goes into onboarding and making sure everybody coming in is aware of what the cultural standards and expectations are, but in a way that’s not top down. It’s in an empowering and inclusive fashion.” 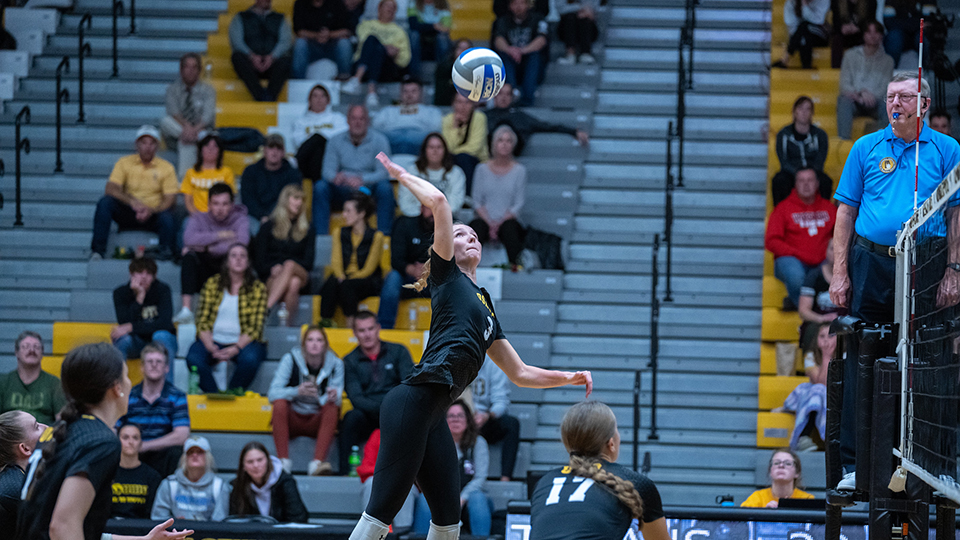 For the retreat’s emotional pinnacle, the players were each given a Walkman-style cassette recorder and a tape and asked to privately, one by one, record a message for their teammates—what they admired, what impressed them, what makes them special. That way by the end of the exercise each player had their own tape of 20 messages of affirmation from their teammates.

“We had known each other not even for like two weeks at the time,” said senior pin Carissa Sundholm, an education major from Muskego. “All 21 of us talked about each other and named something super amazing about one another. It led to tears because so many people were so vulnerable in that moment.

“That was such a good start to our season because even before playing a match we were able to really connect with each other and just show appreciation for each other. I think that was a really good foundation for our season.”

Learning to play ‘loose and colorful’

When out of the woods and back in the gym, the team found success early and often. Led either statistically or spiritually—and sometimes both—by seniors Sundholm; Kate Nottoli, a science education major from Palatine, Illinois; and Claire Bresser, an education major from Waupun, UW Oshkosh finished the opening month of September with a 17-4 record. And after a defeat at Ohio Northern University on Sept. 17, they wouldn’t lose again until the conference tournament semifinal Nov. 3. Their 19-game win streak to close the regular season stretched over more than six weeks.

Ellmann, who passed the 100-win mark during that stretch and later earned regional and conference coach of the year honors, said it was during that undefeated run things clicked. When it came to handling on-court adversity, the team went up a level. It was much needed for a “meat-grinder of a season,” as he put it.

“We understood that we played really, really well when we were loose and colorful—that’s the phrase the players coined,” Ellmann said. 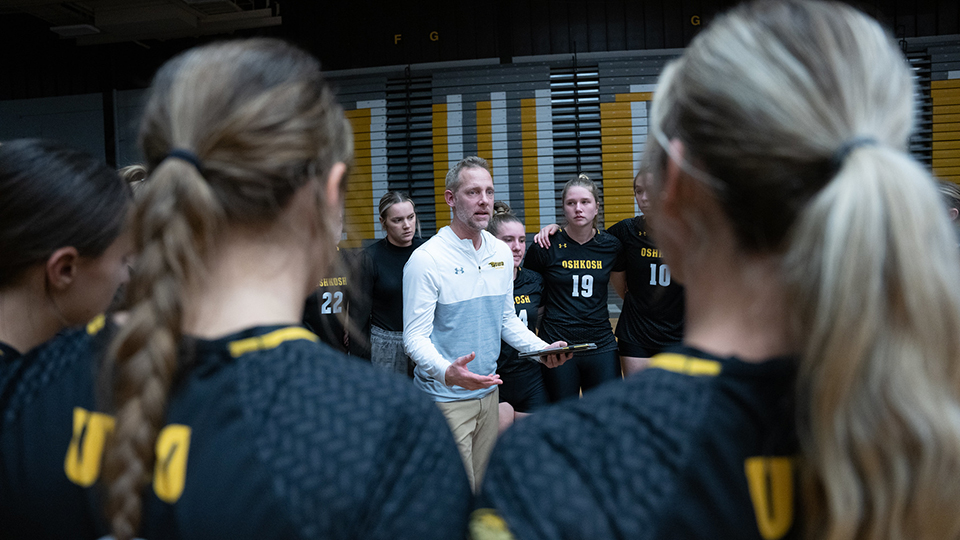 Head coach Jon Ellmann earned win No. 100 with a victory over UW-Eau Claire in October.

With the pregame routine of listening to the cassettes full of positive messages and endless energy emanating from its leaders—including Nottoli, who despite a reduced role her coach called “the core of our energy”—the Titans earned an at-large bid in the NCAA tournament following a second-round exit from the Wisconsin Intercollegiate Athletic Conference (WIAC) tournament.

They advanced to the round of 32, winning their first NCAA tourney match since 2009 with a gut-check 3-2 victory over Otterbein University. The season ended with a loss to Calvin University, cementing the season record at 31-6.

“I feel like I’ve never had a team that’s been this close and truly every time we stepped on the court we were out there playing for each other,” said Sundholm, who reached the 1,000 career kill milestone in her third and final season with the Titans. “We were always looking to each other and playing for the person next to us. That’s something I’ll never forget.”

‘Any night somebody could tee off’

“I think a really defining thing for the team this year is how much chemistry and team camaraderie we had,” said Fregein. “You can see it on the court when we play. You can have a team full of really talented people but if they don’t get along off the court it never really works when you’re playing.” 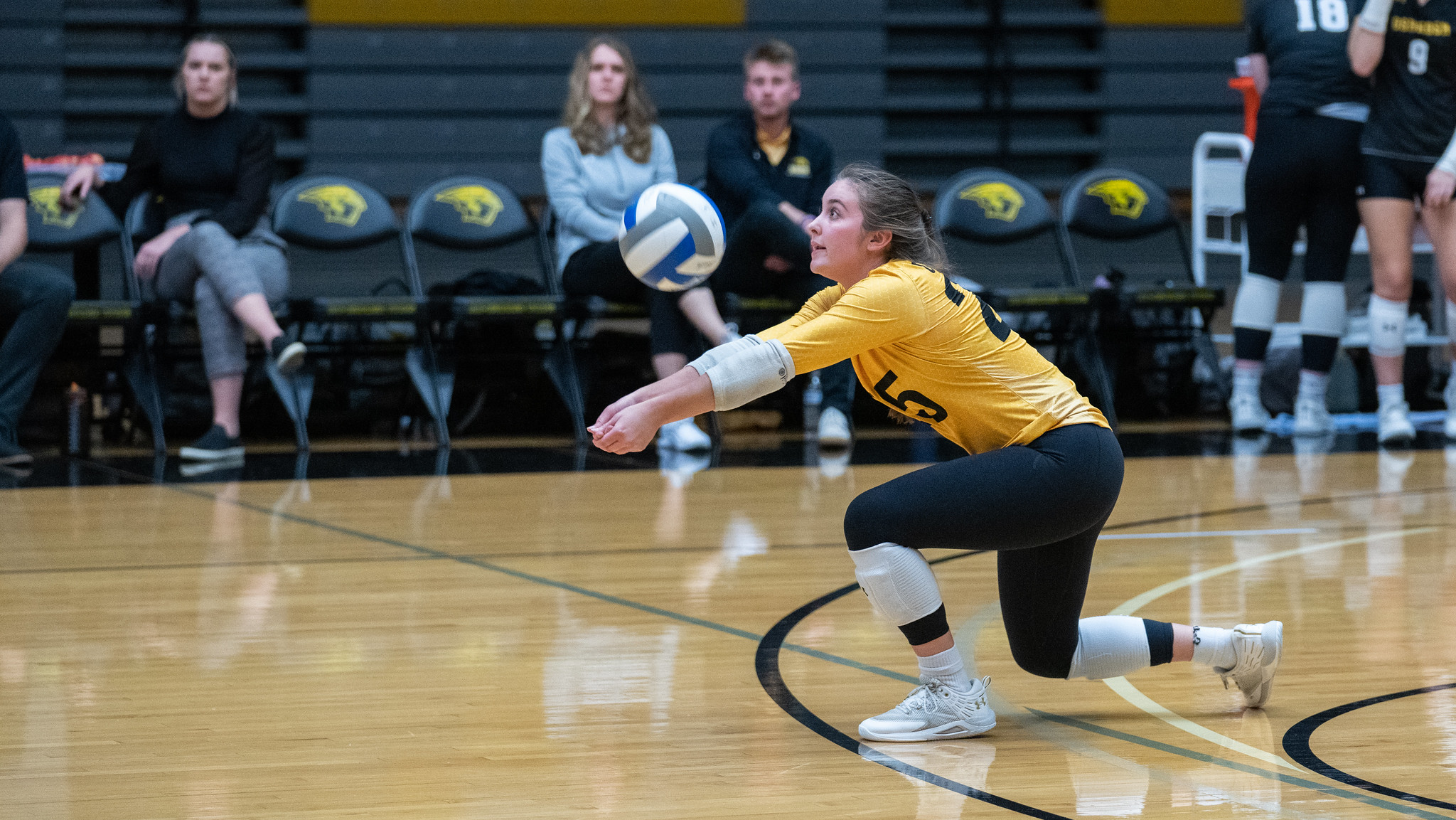 Sophomore Abby Fregein was named to the WIAC All-Defensive team, among other honors.

Ellmann said no group under his leadership has had depth like the 2022 squad. Starting lineups could be shuffled, roles could be redefined—and everyone stuck together.

“We had some players who stood out statistically as top scorers or top defenders but really our success in big matches wasn’t always because of those players, it was somebody else had a great night,” he said. “To see where that was going to come from and know that any night somebody could tee off and help us win, that’s really fun and it gives you a lot of confidence going into matches, understanding there are multiple ways to win.”

From the season-opening tournament in Virginia where they’d meet the eventual national champion Juniata College through their season-ending tournament loss, the Titans battled together.

The practice gym was their “lab,” Ellmann said, where they found solutions for whatever might come next. And from the time they left Green Lake to the end of their season in Grand Rapids, they were able to solve just about anything that came their way.

“As seniors with a big class coming in, we had a goal of making them all feel welcomed and a part of this team but to also let them know what standards we hold on the team in the gym, academically, and with each other,” Nottoli said. “Meaning there is a certain level of respect for your teammates that needs to be a given. Establishing that from an early time allowed us to blossom. It truly was like being surrounded by your best friends day in and day out.”