Dan Brosman, director of the University of Wisconsin Oshkosh’s Small Business Development Center and Center for Entrepreneurship and Innovation, received the Propel Young Professional of the Year Award from the Oshkosh Chamber of Commerce. 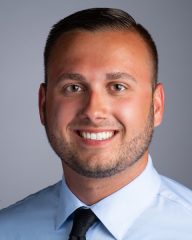 Some background: Brosman earned a business administration bachelor’s degree in 2015 and master’s in 2021, both from UW Oshkosh. Along with his work at the University, he’s been a significant contributor to the Propel group and is an entrepreneur himself, having recently launched the Oshkosh Pedal Trolley.

What he said: “I am humbled and grateful to be recognized as the Young Professional of the Year,” Brosman said. “It’s an honor to connect and grow with other like-minded individuals through Propel, as well as be a part of such a vibrant community.”