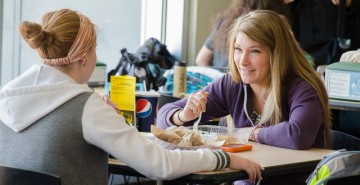 Students dine at Reeve Memorial Union, where many fair trade items are sold.

In 2008, the University of Wisconsin Oshkosh made history by becoming the first fair trade university in the United States.

Since then, colleges and universities across the country have followed UW Oshkosh’s lead, implementing fair trade efforts on their campuses with the ultimate goal of passing a fair trade resolution, a process outlined by Fair Trade Colleges and Universities. That is what UW Oshkosh did five years ago, and the University celebrates the anniversary by continuing to move forward and push itself to broaden its fair trade commitment campus-wide.

“We’d like to sell more Fair Trade products on campus, and we’d like to expand our educational and promotional campaign,” said David Barnhill, English professor and director of Environmental Studies.

Barnhill, who serves on the Fair Trade Committee at UW Oshkosh, said he hopes fair trade education “will be a visible presence” in the University’s new University Studies Program (USP), set to kick off in fall 2013. USP is a new general education program to be implemented at UW Oshkosh that is more cohesive and designed for students to explore questions that will prepare them for the 21st century world. One of those “signature questions” that every UW Oshkosh student will explore is “How do people understand and create a more sustainable world?” Students will be educated and expected to “understand local and global earth systems; the qualities of ecological integrity and the means to restore and preserve it; and the interconnection of ecological integrity, social justice and economic well-being.”

“We knew that when we became the nation’s first fair trade university, we would be making a life-long commitment to right and responsible action in not just in the economies we support and products we consume but in the education we deliver in our classrooms and community,” UW Oshkosh Chancellor Richard Wells said. “The University Studies Program’s fall launch is one more fitting way to demonstrate and celebrate our commitment to fair trade and its role in the current and future lives of our students.”

The University’s fair trade journey does continue to evolve and venture along new paths in terms of purchasing practices at UW Oshkosh.

Barnhill said the possibility of adding additional items to the list of fair trade items purchased and sold by the University, such as sugar, is currently being considered. He said the price increase caused by switching to fair trade items, however, is sometimes too substantial.

“We plan to keep expanding sales and promotion,” he said. “With a transient and largely off-campus student body, keeping the community informed and excited is an ongoing challenge.”

“The biggest success is Sodexo switching to all fair trade coffee in Blackhawk. This is the largest fair trade sales on campus,” Barnhill said. “But we’ve also made good headway in educating the community about fair trade and promoting it around campus, with Reeve, Residence Life and Dining Services being strong supporters.”

Recently, steps were taken to further improve UW Oshkosh’s fair trade efforts by becoming affiliated with the Worker Rights Consortium (WRC). The University had previously been affiliated with the Fair Labor Association, but Barnhill said the WRC “is more strongly connected to workers’ rights and more willing to challenge practices that are unjust.”

“We are confident that the WRC is fully committed to workers’ rights,” he said.

The WRC is an independent organization that monitors labor rights and investigates the working conditions of factories around the world, with an emphasis on factories that produce university-related apparel.

Barnhill said that the actions of the University, just like individuals, can impact the people and environments half way around the world. He said that such institutions are also members of society and a world economy.

“The University is called to be a responsible member of the world community,” he said. “The benefit of going fair trade is doing our part to improve lives and protect the environment.”