Enright’s innovation and leadership in the media and marketing industry have made her one of this year’s UW Oshkosh Alumni Association Distinguished Alumni Award winners.

As a journalism student at UW Oshkosh, Enright got involved in the American Advertising Federation (AAF) Competition and Ad Club.

After graduation, Enright quickly climbed the corporate ladder to become successful in the field of media marketing. At the dawn of the interactive marketing age, she earned a position at Laughlin Constable as an interactive media planner. She quickly progressed to the position of interactive media manager for Quantum Leap Communications, where she worked with clients like MSNBC, Slate and OnHealth. In 1999, she became the associate media director of marchFirst.

In 2001, Enright became the national ad programs manager for Cars.com, where she was responsible for developing advertising opportunities for clients, including Mercedes Benz, GM, Ford and Honda.

In 2003, Enright became the associate media director for Integer Group, one of the world’s largest promotional, retail and shopper marketing agencies. She led multiple promotional media plans for Coors Brewing Company. In this position, she educated Coors Brewing Company’s brand managers and directors on the benefits of digital media and integrated mobile marketing efforts.

After working for Integer Group, Enright worked with many more Fortune 500 companies through various marketing agencies, including KitchenAid and United Airlines in the ever‐changing world of digital media.

“Her expertise has been in digital marketing, helping brands reach consumers via new channels of the internet and, most recently, entertainment and social media,” UW Oshkosh assistant professor Sara Steffes Hansen said. “Importantly, her talents not only charted the way for these brands, but also integrated with traditional media in a fast‐changing landscape during the last 15 years.”

In 2007, she became the senior vice president of Starcom USA and the activation group director for Kraft. She was responsible for all of the activation development, negotiation and execution of Kraft’s $350 million media investment, including video, publishing, digital, mobile, shopper and customer relationship (management) CRM media marketing. She also was a key adviser to the senior management of Yahoo, AOL, Google and Microsoft on what consumers and marketers needed from their companies.

Executive Vice President of Starcom USA Mark Pavia was extremely excited for Enright to join the Starcom team because of her desire to make a difference in the world of media marketing.

“I asked Anne to join our company because I felt like she wanted to help change the world when it came to marketing,” Pavia said. “While it may seem obvious now to invest in digital, it was not then. Anne was already a pioneer then and continues to be today.”

In Oct. 2013, Enright picked up her life in Chicago and moved it to Seattle to become the director of media and measurement for Starbucks. She is responsible for leading all paid media activity for Starbucks across all of their brands, including Teavana, Evolution Fresh, Seattle’s Best and Tazo Tea.

She sets a strategic media vision for the company,  identifies and develops strategic partnerships, manages their media investment of more than $100 million, drives media innovation and oversees media agency relationships.

Enright has been a key player in developing innovative digital media marketing  strategies for some of the country’s largest clients, and her career has taken her to places she never imagined it would.

“I’ve lived the dream,” Enright said. “When I left UWO and started my career 17 years ago, never did I imagine that I would have had the privilege to work with multiple Fortune 500 companies… Nor did I think I would shape the strategy of how those companies connected with their consumers.”

Since graduating from UW Oshkosh, Enright has met with industry leaders like Sheryl Sandberg and Mark Zuckerberg. 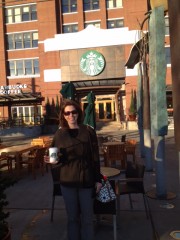 “I work for a cultural icon, Starbucks, that is led by a pioneer in building a business with the lens of humanity, Howard Schultz,” Enright said.

UW Oshkosh journalism professor Mike Cowling and Steffes Hansen commend Enright not only for her success in the field, but also for remembering her UW Oshkosh roots.

This summer, Enright co‐presented a peer reviewed panel session with three faculty members from the journalism department at the annual conference of the national association that accredits the UW Oshkosh Department of Journalism.

“That kind of collaboration speaks volumes about her commitment to the Department of Journalism and to the profession as we evolve in a digital age,” Cowling said.

Steffes Hansen often shows Enright’s LinkedIn profile to her students as an example of what journalism students can accomplish when they work hard.

“Her profile provides our students with a motivating example of what they can accomplish by working diligently, thinking strategically and keeping pace with the digital rigor of our profession,” Steffes Hansen said.

Enright and her success show current students what their UW Oshkosh education can help them accomplish, and Enright attributes much of her success to her time as a student at UWO.

“I sit at the table with those who have attended Big Ten and Ivy League schools and prove that UWO can produce talent that matches their education,” Enright said.

Enright and nine other award winners will be recognized at the Alumni Award Celebration during Homecoming Weekend on Friday, Oct. 17.

For more information about the alumni awards dinner, please contact the Alumni Relations office at (920) 424-3449 or email alumni@uwosh.edu.