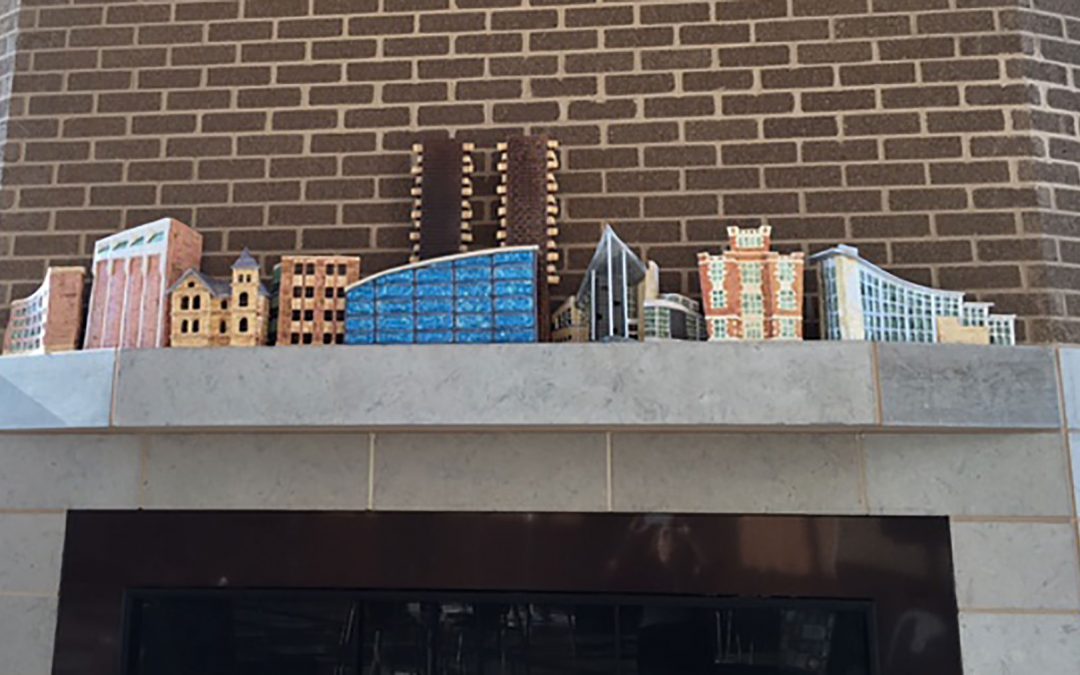 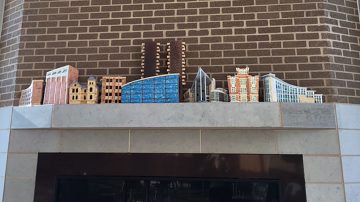 As alumni and other guests walk into the Great Hall of the University of Wisconsin  Oshkosh’s Alumni Welcome and Conference Center, they are greeted by floor-to-ceiling windows and a modern two-story fireplace. On the mantel of the featured fireplace now sits small ceramic replicas of UW Oshkosh campus buildings.

Laura Rommelfanger, AWCC director, said the building is filled with original pieces of art by UW Oshkosh alumni and the AWCC team wanted something to display on the mantel.

“We thought sculptures would look really great on this mantel, but we wanted them to be significant to UW Oshkosh,” Rommelfanger said. “The inspiration behind the campus-scape project was former UWO graphic designer Donna Mleziva’s digital design of the campus.”

Art Rathjen, vice chancellor for advancement and foundation president, said this would be a great opportunity to showcase the artistic talent of UWO students.

“The campus buildings all have their own iconic designs, unique shapes and sizes,” Rathjen said. “I thought it would be neat to have a small replica of these buildings for the fireplace mantel and the ceramics department did the rest.”

Rommelfanger asked UWO professor Craig Clifford if creating ceramic buildings based on the design was possible and he said he had students that could take on the project.

“I tried to pick people who I knew had the skill to do it, technical skill and the hand and eye coordination skill,” Clifford said. “I picked people who were very serious about art. I knew they were studio majors and it was something that they wanted to do beyond school and they had an interest in ceramics.”

Those Clifford recruited during mid-spring semester 2015 for the  project included recent UWO graduates Rebecca Blakeslee, Melissa Siewert and Ryan Steiskal. The project began in June 2015 and was completed in October 2015.

“Ceramics is very procedural,” Blakeslee explained. “There’s a lot that goes into it, which people often underestimate.”

Blakeslee said she put approximately 100 hours into the project, estimating 60 hours for building the structures, 20 hours of glazing and 20 hours of strategizing with Steiskal and Siewert.

Before the building process began, Steiskal said they went around campus and took photos and notes of the buildings they were going to create. 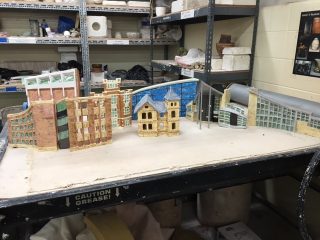 “We made sure to pay close attention to the key details that give each building its identity and tried to find the best ways to communicate that in our pieces,” Steiskal said. “So each ceramic building is not an exact copy, but they definitely have the key traits of the originals that make them instantly identifiable.”

Siewert said they also measured the fireplace mantel, so they could develop a 2-D plan of where each piece was going to be placed. Once the sketches were complete, they could move onto creating the structures.

The buildings started as slabs of clay. Blakeslee said they went through a process of cutting the slabs into the shapes of the buildings, letting them dry, carving the designs and firing them.

Once the ceramic buildings were fired, they moved on to the glazing process.

Siewert said even though they used the same couple of glazes on all of the buildings, such a wide variety of colors came out of them.

“The colors we left until the end because glazing can be so fickle, so we figured that we just wanted to get started with the actual making of them before we worried too much about the colors,” Siewert said.

She added that the glazing process can get stressful because it can be unpredictable.

“So many things can go wrong,” Siewert said. “You know something could happen in the kiln, or something didn’t get mixed right…then if something doesn’t come out right the first time that you glaze it, well now you have fragile stuff and glazing it a second time is a huge risk.”

Blakeslee said they tried to keep the colors neutral, so the pieces would go well together, as well as with the color palette of the AWCC.

“We just wanted them to be neutral pieces and, at the same time , be cohesive, so we had a set list of glazes we could choose from.”

Even though they completed the project in October, Clifford said they just got the campus-scape installed on the mantel a few weeks ago.

Rommelfanger said the pieces are artistic yet detailed.

“These pieces are a perfect fit for the Alumni Welcome and Conference Center,” Rommelfanger said. “I just love it. I am truly excited to share this artwork with our campus community.”