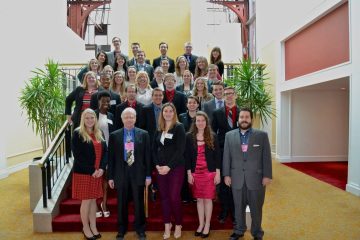 UW Oshkosh students represented seven nations at the competition, which involved more than 700 students from 44 universities in 13 states representing 70 nations. The competition was held from Feb. 10-13, 2016.

Kenneth J. Grieb, coordinator of International Studies and faculty adviser to the Model United Nations Organization, noted that “UW Oshkosh students demonstrated the ability to accurately represent nations from all major regions of the world.”

Delegates were judged on their knowledge of the issues, the accuracy of their representation of their nation’s foreign policy, their diplomatic and negotiating skills enabling them to build consensus support, and writing and speaking skills.

Delegates’ Choice Awards, granted by vote of the participating student delegates, were won by Z. Stuebs and A. Pflanzer.