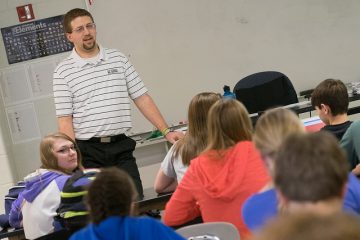 Three years ago, University of Wisconsin Oshkosh alumnus Ben Sanderfoot ’14, was walking through Reeve Memorial Union when he saw tables set up promoting Be The Match–a bone marrow registry.

At first he kept walking but something told him to turn back and sign up. His decision to turn around gave him the opportunity to help save a person’s life.

Since registering, Sanderfoot has been called as a potential match three times. The first two times he was not chosen as the donor, but the third time he was.

“Apparently the third time’s the charm,” he said.

At the end of January, Sanderfoot went to UW Hospital in Madison to donate his bone marrow for a complete stranger. According to Be The Match, the donation process is a surgical procedure in which doctors withdraw liquid marrow, where the body’s blood-forming cells are made, from both sides of the back of the pelvic bone. The entire process typically takes a day and is done in a hospital operating room.

When asked to describe the process, Sanderfoot said it was a little bit of crazy, but a whole lot of awesome.

“It’s hard to describe the feeling I got knowing there’s the possibility my bone marrow will get a chance to save a person’s life,” he said.

Sanderfoot decided to become a teacher because of his love of learning and school. He enjoys seeing all of the positive effects that can happen from teaching, especially in ways other than academics.

Ahead of his donation, he talked to his classes about bone marrow donation, incorporating the science behind the process and the possible outcomes for the bone marrow recipients.

His efforts went beyond his classroom. Sanderfoot shared Be the Match materials with teachers and students, taking the  time to explain the process with any student with questions.  He even helped a student organization set up their own Be the Match community drive, which registered more than a  dozen new potential matches.

“This young man is really quite remarkable,” said MaryBeth Petesch, field experience director with the College of Education and Human Services.  “I particularly appreciate how he used  his bone marrow donation as a teachable moment of his high school students and also the larger community of Berlin. He is making a difference in meaningful ways.”

Sanderfoot said it has been awesome and humbling to see the impact his donation has had–spreading kindness and awareness to the greater community.

“My one action was able to become a springboard for something much larger, and I can only hope that it makes a difference.”

Healthy marrow and blood cells are needed to live. When diseases, like leukemia and lymphoma, affect marrow so that it cannot function properly, a marrow transplant could be the best treatment option, and for some patients, offers the only potential cure.

Over the past 25 years, Be The Match , operated by the National Marrow Donor Program  (NMDP), has managed the largest and most diverse marrow registry in the world, working every day to save lives through transplant.