Historians have long debated about who or why the Bayeux Tapestry was created.

Although, historians can’t agree on its origins, most agree the tapestry tells a universal story of struggle and power.

Sometimes referred to as the “first British comic strip,” the 230 foot long tapestry uses embroidered images to tell the events leading up to the Norman conquest of England, culminating in the famous Battle of Hastings in 1066.

Evidence suggests similar works of art were commissioned during the time, but didn’t survive due to outside circumstances–weather, age, destruction.  The tapestry’s unique imagery and ability to visually tell a good story, lends itself to be re-imagined in popular culture. 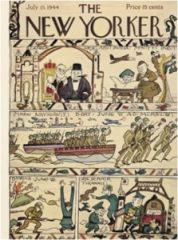 For the July 15, 1944 cover, the New Yorker told the story of the D-Day Invasion of Normandy illustrating scenes in the original tapestry’s style. In addition to using the original artistic style, Rea S. Irvin, art editor for the magazine, used similar themes from the original, to tell, as he felt, an equally significant story in history. This time however, it is the British and its allies conquering Normandy.

Critics and writers have made comparisons between the Star Wars saga and medieval tales, often comparing Luke Skywalker with King Arthur. Both grow up not knowing their true parents, but meet mentors who help shape their greatness– Arthur has Merlin, while Luke has Obi-Wan Kenobi and Yoda.

London-based designer and illustrator Aled Lewis translates the comparisons to art in his Couscant Tapestry. The 30 foot hand-stitched piece of art took which took six months to create and tells the Star Wars saga from episode one to six.

Bill Mudron created the BayWho tapestry as a tribute to celebrate  50 years of Doctor Who, a British television show. The 12 foot-long image depicts iconic moments from Doctor Who’s long  history, beginning with the First Doctor’s departure from his home planet of Gallifrey to the introduction of the Tenth doctor.