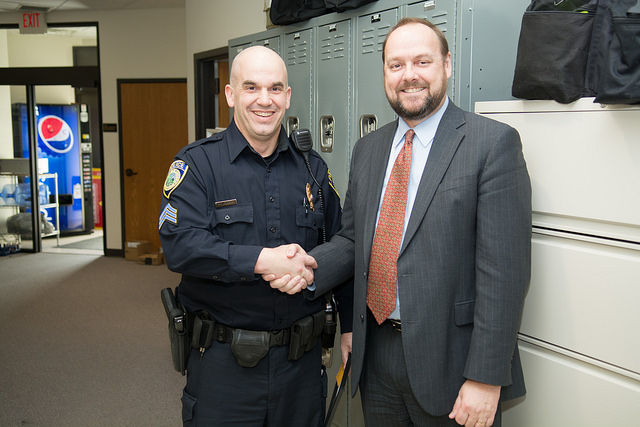 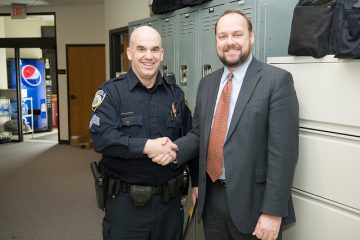 Donovan Heavener, police sergeant for the University Police Department, has been named the recipient of the April STAR Award.

He was nominated by Chris Tarmann, police lieutenant for the University Police Department at UW Oshkosh.

“Sergeant Heavener is tasked with a number of different duties to include: responding to calls and investigating incidents, supervision of the day shift police officers and dispatcher, overall operation and control of the Community Service Officer Program, and Special Event Coordination with a large number of different departments on campus. He wears about five or six different hats. These are all functions of his role here at UW Oshkosh, which never fit within a 40 hour work week.

“Sergeant Heavener manages these tasks very well and still finds time to support community events such as Run with the Cops, Shamrock Shuffle, Polar Plunge, Race for the Light and a number of other events that happen in and around the Fox Valley, along with events that occur outside of the Fox Valley. Sergeant Heavener sits on the Run with the Cops organization committee, and if you haven’t noticed, he is typically in promo videos for this event. His support of this event and many others has helped grow community partnerships over the past several years.

“A few months ago, Sergeant Heavener worked with a group of students from the radio TV film department to create some Public Service Announcements (PSAs) for Click-It or Ticket. These PSAs were meant to support these campaigns and the safety of our students, faculty, staff and any visitors at the UW Oshkosh campus. The PSAs were shared at a local level and some were shared nationally. Because of his efforts, I believe students, faculty and staff members have taken these campaigns more seriously, ultimately creating a safer environment here on campus.

“Sergeant Heavener goes above and beyond to seek ways to support and enhance student events through the special event protocol, which went into place last year and, I believe, if you were to talk with anyone who has worked with Sergeant Heavener in regards to an event they would say that he goes way above and beyond to find a way for the event to take place. That means, if the event won’t work the way it was presented during the special events meeting, he will seek out a way that we can make it work.

“Sergeant Heavener works very closely with a lot of different campus departments to help facilitate different aspects of our department mission and his willingness to discuss conflict and create solutions has been well-received by many of those departments. He deserves recognition for his ability to advance the mission of our Police Department by supporting the community policing model and by encouraging student enhancement in almost every aspect of his position here at the Police Department.