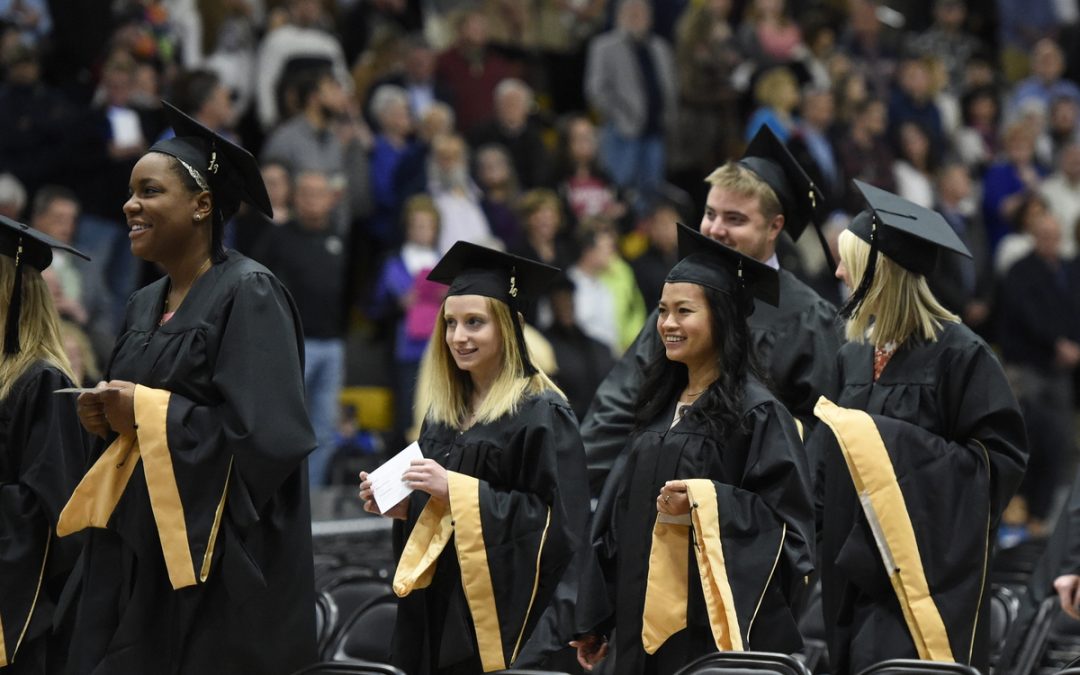 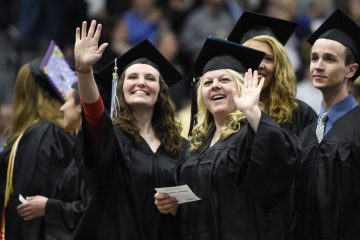 More than 1,300 undergraduate and more than 190 graduate studies students were recognized as the University of Wisconsin Oshkosh’s newest graduates—bringing UW Oshkosh’s alumni base to nearly 90,000—at 142nd spring commencement ceremonies Saturday, May 14.

“I woke up this morning and it felt like just another day. Then I realized it was graduation day and this is actually happening,” said Choua Yang, a Spanish and pre-med major from Stevens Point. “I am really looking forward to taking that next step forward.”

For Yang, this is only the beginning, as she plans to take a year off to work before going to medical school for surgery or pediatrics.

“The biggest thing I’ve learned while at UW Oshkosh is to not be afraid to step out of your comfort zone,” Yang said.

Accounting and finance double major Jaclyn Freund, of Eldorado, said she learned a lot about herself in college.

“I became more outgoing and willing to stand up for myself…to really take control of my future,” Freund said.

For Kevin Hintz, of Appleton, graduating is a relief. Hintz has been pursuing his degree in organizational administration through the Division of Lifelong Learning and Community Engagement (LLCE) for the last 13 years.

“My adviser, Beth Richards, kept working with me and was understanding of my schedule,” said Hintz, who works full-time at Ascension Health as an IT manager. “It might seem like a long road, but when you get to the end of the road, you realize it’s not as long as you thought—time goes fast.”

For Hintz, pursuing his degree through LLCE allowed him to continue working and gave him the flexibility needed to graduate and accomplish his educational goals as an adult student.

“My advice to all students is to not let what looks like a long road stop you from pursuing your education,” Hintz said.

Proud aunt, Joan Cash, her husband Bob and her father Tom Potter attended the morning commencement ceremony to celebrate Breeanna Lehman, of Janesville, who graduated with a major in kinesiology.

“We are just so excited and proud of Breeanna,” Cash said. “She is Tom’s first grandchild to graduate from college with a bachelor’s degree and she worked so hard throughout college.” 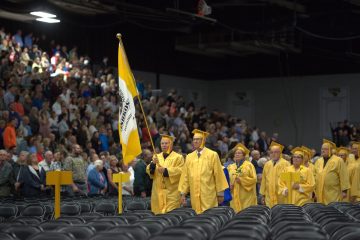 The Class of 1966, the UW Oshkosh Golden Titans, led the Class of 2016 into the afternoon commencement ceremony. Golden Titan Kenn Forsyth, of Freedom, was amazed with the changes on campus over the last 50 years and was excited to be back at UWO.

“To the graduates today my advice is to choose your career carefully and work hard at it,” Forsyth said.

Graduate student Taylor Miller, of Crystal Lake, Ill., graduated with a master’s degree in psychology and said she hopes to pursue a career in market research or healthcare research.

“The biggest thing I learned was balance,” Miller said. “It’s true of any program that you learn what it means to balance academics, personal life and family.”

Each graduate faced challenges on their journey to graduation. For grandma Eunice Conley, of Laona, watching her granddaughter Michele Mader, of Stockbridge, work so hard to graduate college while overcoming health challenges made her so proud.

“I’m so excited to see her graduate today,” Conley said. “She has really grown so much and become more confidant. I am so proud of her.”

Daniel Mallmann, of Chilton, graduated with a degree in special education—something he said has been passionate about since his childhood.

“I am excited to start the next chapter of my life,” Mallmann said.

For College of Nursing graduate Tyler Vang, of Mosinee, that next chapter begins as a registered nurse at St. Agnes in Fond du Lac.

“It feels unreal to be done today,” Vang said. “Five years feels like it went by so quickly and as a freshmen coming in here I felt like I didn’t know anything and now I feel much more confident in my knowledge.”

Vang, who worked in the admissions office for four years, said he is thankful for the second family he had in his on-campus job, and for all the life lessons he learned.

“In college, I learned the value of hard work, dedication and about myself,” Vang said. “My advice to current students is to not give up on your dreams.”

Commencement speakers—including faculty and student speakers, state representatives and UW System Regents—offered the 2016 graduates advice for the future and urged them to take action and pursue their passions.

In her address during the morning commencement ceremony, student speaker Graciela Brinkman-Hernandez, a women and gender studies major, dared her fellow graduates to be activists.

“Wherever our professional or personal journeys take us, I do not doubt that we Titans will be there for our fellow humans with empathic and understanding hearts just as the people in our lives have been there for us,” Brinkman-Hernandez said.

“As we select our new destinations, I challenge each and every undergraduate and graduate student to pursue that passion. To go after it. To give it everything you have,” Busko said. “If there’s one thing I would like for us to take away from today, it’s this: We owe it to our future selves to pursue our passions and create our maps.” 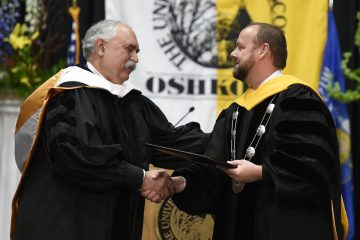